Allen Gets The "Big Show" He's Dreamed Of

Arnold Allen admits that he has no problem flying under the radar. Yet the British featherweight is doing a lousy job of it, considering that even though he’s only fought once per year since 2015, he’s still seen as a top prospect with championship potential.

And this Saturday, should he defeat Gilbert Melendez on the biggest UFC card of 2019, the likelihood of him staying out of the spotlight will be nearly impossible. Begrudgingly or not, Allen is okay with that.

“If I have a good performance, then it should put me in the top 15 at least and start getting me those fights so I get my name about,” he said. “It's nice, but I like flying under the radar, though. I like not having so much hype. And I definitely don't look for it.”

Talent has a way of making people find you, though, and the 25-year-old Allen certainly has it. Yet as good as he’s looked in compiling a 5-0 UFC record, that aforementioned inactivity has hurt him.

“I like to be active,” he said. “I train like I'm in camp all year round and maybe that's the reason I haven't been as active is because I work hard and I get injured. So I'm happy to be able to get back in there.”

When he does step into the Octagon at T-Mobile Arena this weekend, it will be his second fight of 2019, marking the first time he’s fought more than once in a single year since he made the walk four times in 2014. So could we get three fights out of Allen in 2019?

“We have a good win here, there's no reason why not,” he laughs, showing that he’s kept a positive attitude through the ups in the Octagon and the downs outside it. And his reward is not just a bout against one of the top fighters of this era in Melendez, but his first in Las Vegas.

“I've been wanting to fight in the States, especially in Vegas, for a long time, but I've been fighting once a year and always in Europe,” he said. “So I'm really excited to make my debut. It's the fight capital for any sport. I wrote it down on my little goals list a long time ago, and it's nice to be able to cross it off.”

Being on the biggest card of the year doesn’t hurt either.

“I'm happy for that but, at the end of the day, the goal is to have one of my own pay-per-view nights like that, so we're not there yet,” he said. 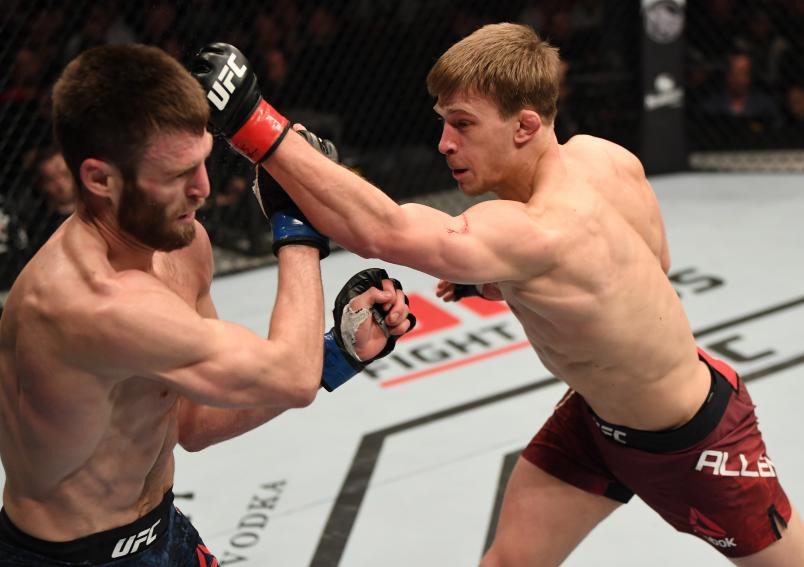 It may be on the way, especially if he can stay busy and beat bigger and bigger named opponents. Saturday will be a good start in Melendez. And while the former Strikeforce champion hasn’t competed since 2017 and is sporting a four-fight losing streak, Allen doesn’t care about such matters.

The best version of Gilbert Melendez is a terror. Arnold Allen knows it, and he’s ready for that guy. Simply put, everything that happens on Saturday night is everything he’s asked for.

“There's no pressure,” he said. “This is exactly what I've been wanting for a long time. I work really hard in the gym, and this is what I've wanted. I want a big show, I want Vegas, I want a name. So this is everything I've been asking for and it's all the things I've wanted in one. I get to fight in the U.S. in Vegas, I get to fight a big name and I get to fight on a big card too, so I'm happy with that.”