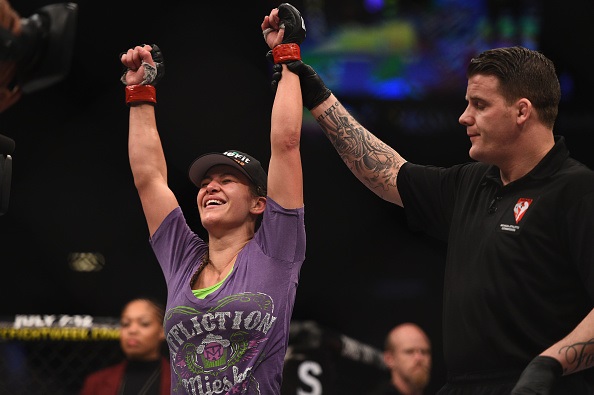 Former world title challenger Miesha Tate was nearly stopped by fellow women’s bantamweight contender Sara McMann in the first round of their UFC 183 prelim bout at the MGM Grand Garden Arena in Las Vegas Saturday night, but she roared back over the next two frames to take an impressive three-round majority decision victory.

McMann came out of her corner firing right hands and landing most of them, one in particular dropping Tate to the canvas. Tate recovered quickly, but having an Olympic Silver medalist in freestyle wrestling in the top position kept “Cupcake” in trouble. Tate worked effectively on the mat, eventually moving to side control, where the ground assault continued to the horn.

Tate continued to have difficulty dealing with McMann’s stand-up in the second, but in the final 90 seconds, the former Strikeforce champion roared back, landing some hard punches in the midst of a flurry before nearly finishing matters with a guillotine choke.

With the fight possibly up for grabs, McMann got a takedown to start the final frame, but Tate reversed position and got on top, where a ground and pound assault wrapped up the come from behind win. 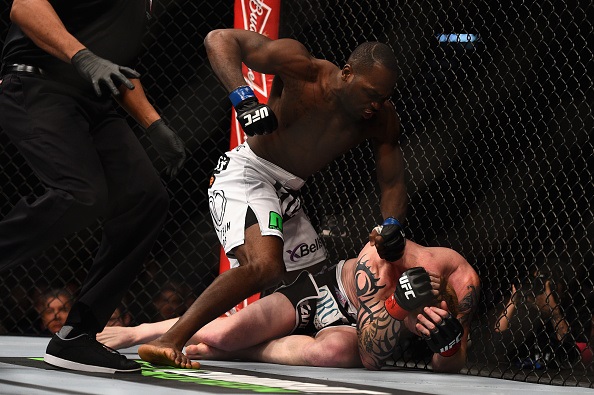 BRUNSON vs. HERMAN
Derek Brunson delivered a stunner in his middleweight bout against Ed Herman, halting the veteran Ultimate Fighter 3 finalist in the first round.

The end came at the 36-second mark.

Taking the center of the Octagon against Herman, Brunson rocked his foe with two hard left hands, sending the Coloradan sprawling to the fence. Brunson pounced, and after a barrage of unanswered blows, referee Mark Smith intervened, ending the bout. 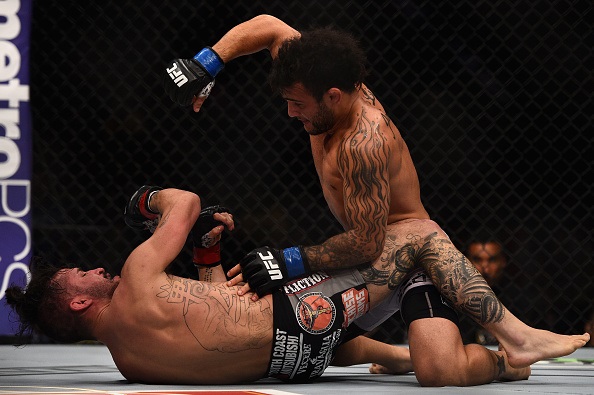 LINEKER vs. McCALL
Brazilian bomber John Lineker picked up the biggest win of his UFC career, taking a close, but unanimous, decision over Ian McCall, but after coming in at 130 pounds for the flyweight bout – the fourth time he’s missed weight - the next time fans will see him won't be against UFC 125-pound champion Demetrious Johnson, but at bantamweight.
“I thought the fight went well," Lineker said. "I was able to execute the game plan that my coaches established for me and that’s what allowed me to win tonight. Obviously, after missing weight again I understand that I have to move up in weight class. I just can’t get seem to get it together and properly cut. I’m convinced that it’s a psychological thing, but regardless, I have to move up. I’m looking forward to new challenges wherever they may be.”

McCall dazzled Lineker with movement as the bout commenced, keeping the Brazilian off guard until he was able to score a takedown in the second minute. “Uncle Creepy” kept his foe grounded until the end of the frame, with Lineker finally responding with a leg lock attempt in the final moments that came up short.

Lineker nearly ended the fight early in round two with a tight guillotine choke, but McCall escaped and eventually found his way back to his feet. Once the stand-up portion of the bout resumed though, Lineker began taking over with thudding body shots and hard lefts to the head before another guillotine attempt before the end of the round.

Still stalking, Lineker wobbled McCall’s legs with a little over two minutes remaining in the fight, bloodying the Californian in the ensuing exchange. In the final moments, Lineker rubbed his belly, presumably mocking his fourth time missing weight, but after some heated exchanges to end the bout, the bad blood between the two seemed to subside. 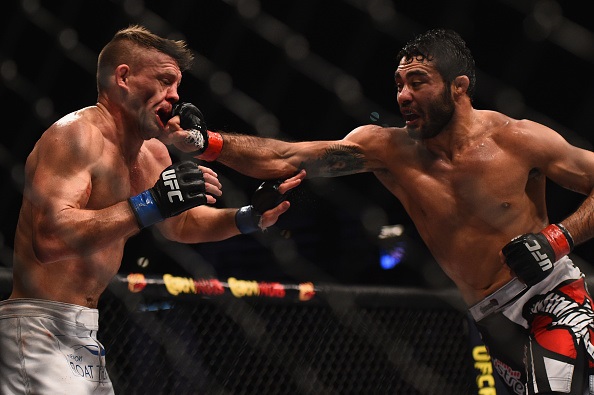 NATAL vs. WATSON
Rafael Natal scored one of the most impressive victories of his UFC career, outpointing fellow middleweight veteran Tom Watson over three rounds.

Natal (19-6-1) dominated the first five minutes, slamming kick after kick into Watson’s legs and body while also whipping in a sharp jab upstairs. To cap off the round, the Brazilian landed three takedowns in the final minute.

In round two, there was little change to the pattern set in the opening frame, even though Watson (17-8) began landing more than he did in the previous stanza. It wasn’t enough to get even with Natal though, leaving “Kong” one more round to get things right. There would be no late rally for the Brit though, as Natal continued to impress, bloodying and even rocking Watson en route to the clear-cut decision win.