Read on for full results of the UFC 166 early prelims that aired online.

Two 23-year-old prospects announced their arrival in the UFC with TKO wins in the UFC 166 online prelims, as Andre Fili and Kyoji Horiguchi opened the show to a large and vocal crowd in Houston. Plus, Tony Ferguson and Adlan Amagov picked up impressive first-round finish wins.

TJ Waldburger vs. Adlan Amagov
Texan welterweight TJ Waldburger got a hero’s welcome from fans in the featured prelim bout, but it was Chechen striker Adlan Amagov who had his hand raised after a massive first-round knockout.

After a quiet feeling-out process, in which Amagov blinked repeatedly as if something was in his eye, 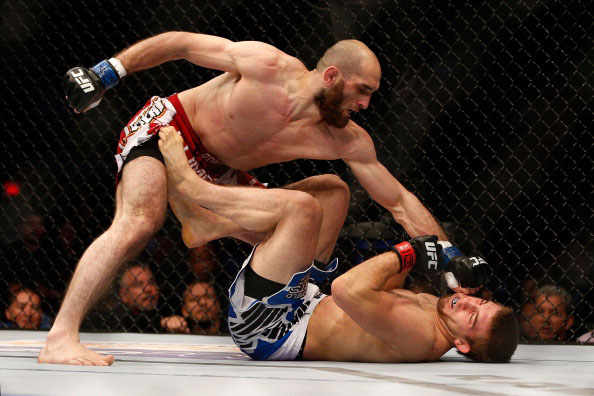 Amagov finally scored with a spinning back kick to Waldburger’s body. BJJ brown belt Waldburger went for a takedown, but Amagov, a Russian Sambo champion, easily tossed him away. Waldburger again labored for a takedown against the fence, but Amagov did damage with short-range punches. Backed off the fence, Waldburger held on to the clinch, giving Amagov all the range he needed to land a hard left and devastating follow-ups on the ground. The stoppage came at 3:45, with Waldburger out cold; he regained consciousness but was taken out of the Octagon on a stretcher.

Jackson’s-trained Amagov now stands at 13-2-1, with his only losses coming in his very first bout and a Strikeforce matchup against Robbie Lawler. Waldburger now stands at 16-8.

Tony Ferguson vs. Mike Rio
TUF 13 winner Tony Ferguson needed less than two minutes to get back into the win column after a lengthy layoff due to injury, tapping out TUF Live’s Mike Rio in a lightning-fast lightweight bout.

Rio shot early and often, but Ferguson nimbly sprawled and maintained top position on his fellow decorated wrestler. Hurt by a short left, Rio shot again, and this time Ferguson sank in a D’Arce,  dropped and rolled, hooking Rio’s arm’s until the tap came at 1:52.

Jeremy Larsen vs. Andre Fili
Training for a welterweight bout when he got the call two weeks ago to fight at UFC 166, Andre Fili was unable to make featherweight for his bout against Jeremy Larsen, coming in 2.5 pounds over; but he made up for it with an exciting six-minute TKO win. 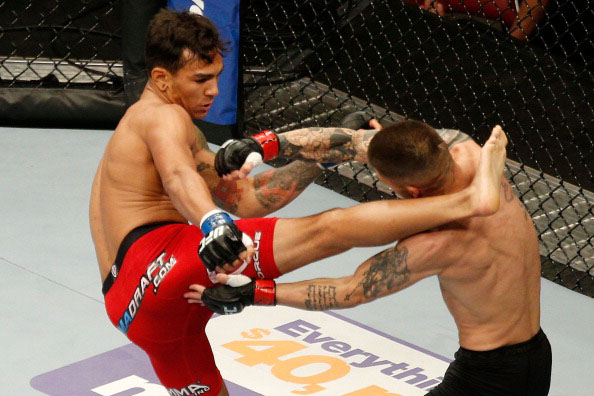 Larsen connected with some long right hands in the first, but the rest of the striking game belonged to Fili, who threw back with rights, uppercuts and bunches of knees that at one point floored Larsen, requiring the doctor to check on the cut that had opened on Larsen’s forehead. Larsen worked at length for a takedown against the fence, but Fili defended successfully. Larsen tossed Fili to the mat from a kick, but Fili tied him up and worked on triangles and armbars before returning to his feet.

Both men landed hard rights early in the second, but one from Fili visibly staggered Larsen. Sensing the end, Fili swarmed as Larsen crumpled, drawing a halt just 53 seconds in.

Dustin Pague vs. Kyogji Horiguchi
In the night’s opening bout, Japanese striker Kyoji Horiguchi bounced back from a rocky first round to win his UFC debut in the second, TKOing Dustin Pague in a bantamweight crowd-pleaser.

After a couple of kicks from the karate-based Horiguchi, Pague dragged things to the ground and quickly took the shorter fighter’s back. Horiguchi stood to try and cheese-grate and slam Pague off his back, and while it loosened the choke, the lanky Pague’s figure-four leglock kept him firmly in place. With two minutes left, Horiguchi managed to shake the choke, turn around and press Pague into the fence. But Pague secured the round with a big knee and another takedown before the buzzer 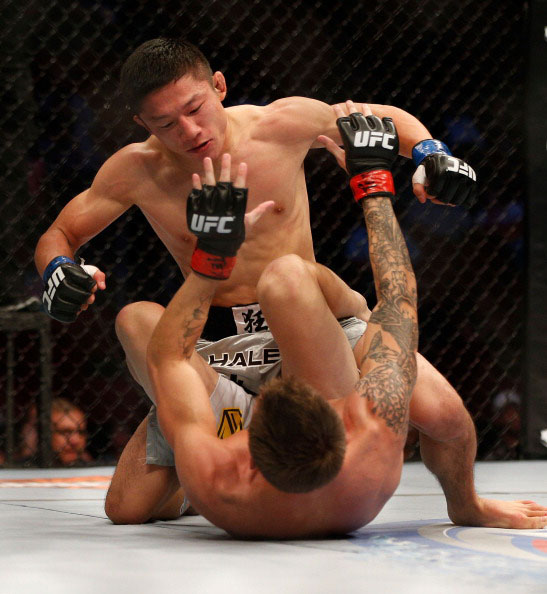 Horiguchi came out with a sense of urgency in the second, and quickly dropped Pague with a crisp left hook. He followed his prey to the mat and scored dozens of strikes, but Pague stayed moving, secured half-guard and swept. Horiguchi reversed and stood, then threw Pague to the mat, locked in a crucifix and threw punches and elbows. Posturing up, Horiguchi connected with massive dive bombs. Pague briefly held the Japanese fighter in his guard but Horiguchi again postured up over Pague and landed shot after shot until Pague turned away and referee Herb Dean stopped things at 3:51.