All Business Makdessi Prepares for Watson

“The worst thing in the world is a waste of talent. Even if you're good at it, you still need the right people to help you keep going with it, pushing you." - John Makdessi 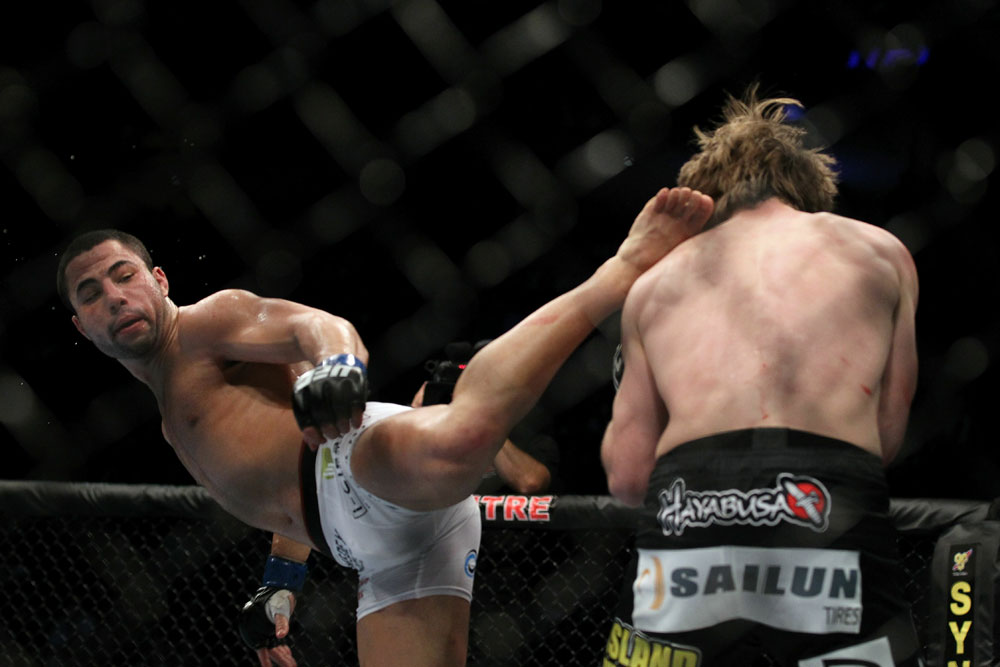 A punch is more than swinging your fist. A kick is more than whipping your foot at someone. Slipping an opponent’s jab, countering with a stunning hook and landing a knockout right shin bone across their left temple doesn’t happen by accident. Technique is and always will be the name of the standup game and it can’t be learned overnight. To be a feared striker requires years upon years of dedication, practicing perfect form, feet placement and body movement.

As every fight starts standing, the better striker always has the initial advantage, and strikers do not come much better than the young, undefeated Canadian John “The Bull” Makdessi.

“I've been competing in combat sports since I was six years old; it's in my blood,” states Makdessi, whose birthday on May 3rd will mark his 20th anniversary in martial arts and beating people with his fists and feet. This journey began with tae kwon do and karate, then a successful stint in kickboxing, which brought him to MMA and, now, Makdessi is making his second appearance in the UFC.

“When it comes to striking, I think about how Floyd Mayweather Jr. says, that most of these guys are learning now what I learned when I was a kid. Fighting is a mental sport. Floyd Mayweather talks about how his mindset in boxing is just at a different level and that’s how I feel.”

A week prior to his birthday, “The Bull” will be showing off those fighting talents to his closest 55,000 friends and countrymen at the Rogers Centre in Toronto, Canada at UFC 129. Makdessi’s lightweight opponent, who will no doubt be heavily booed to the cage simply for squaring off with the Nova Scotia native, is The Ultimate Fighter 12 semi-finalist Kyle Watson.

“Kyle Watson is a good opponent,” says Makdessi of his 15-7-1 foe, who is coming off his UFC debut decision win over Sako Chivitchian last December. “He is going to test my jiu-jitsu skills. He is going to test my defense and my awareness on the ground. He's a decent striker and a decent wrestler. He trains out of Matt Hughes' gym, so I'm expecting a tough fight.”

“The Bull” has certainly done his homework. Watson is a noted BJJ brown belt with 10 wins by submission and is the head jiu-jitsu instructor at the H.I.T. Squad gym in Granite City, Illinois. Meanwhile, Makdessi is preparing himself at an equally famous camp - Tristar Gym in Montreal -under the enigmatic philosopher warrior Firas Zahabi.

“I've never had an easy fight, so I'm always training for the worst. I train very hard and my body is always bruised up. I'm always expecting a war. Plus, fighting in Toronto and fighting on my native soil is going to play to my advantage.”

After making the switch from kickboxing to the truly full contact world of MMA, Makdessi has faced eight different men, all within Canadian borders, and walked away with his hand raised each time. “The Bull” made his UFC debut in Montreal at UFC 124 with a thunderous ovation that is usually reserved for a main event and not the opening bout of the night.

“I like to think of myself as a people's champion and I fight for the people. The people support me and it makes me stronger. I think this is going to be a crazy atmosphere. It will be mind-blowing. I'm very excited.”

To thank the crowd, Makdessi dominated an all out standup affair against his much bigger opponent, Pat Audinwood. “The Bull” came forward and often with a variety of kicks and punches that kept Audinwood on defense and in retreat mode for most of the fight. It was a simple outclassing on the feet, but wasn’t the highlight reel win Makdessi was hoping for.

“The most important thing for me when I'm fighting a tall fighter is to chop out his legs. It's the same concept as chopping down a tree: you're not going to start from the top, you start at the bottom. It was working for me. I tried to engage with him and I tried to finish him, but he was stronger and bigger than me and was going backwards, which made it difficult. It is always a blessing to come out victorious. For a fighter, a win is a win.”

The kicks targeted more than just his opponent’s legs. Makdessi showed off an arsenal of hook kicks, axe kicks, sidekicks and just about any “insert blank” kick one could think of. From some fighters, these types of kicks are all flash with little substance. For the educated feet of “The Bull”, these are the weapons that earned him a 22-0 kickboxing record and in 2006 won him a gold medal in the USKBA (United States Kickboxing Association).

A whirling foot to face is just one of many problems “The Bull” presents his foes. “I always want my opponent to be worried about what I'm going to do next,” says Makdessi, who fervently trains in all aspects of MMA to be more well-rounded, which for him is mostly the foreign territory of groundfighting. “I spend most of my time now putting myself in bad situations training my weaknesses: wrestling and Brazilian jiu-jitsu. They're not exciting to me, but they are sports I respect and I have to learn. To me they are not ‘combat sports’ and I'm a combat fighter - I love striking.”

When “The Bull” walks out to the roar of the crowd on April 30th at UFC 129, he will be representing Tristar Gym. But Makdessi’s training has been overseen by many different coaches like Phil Nurse, John Danaher, Jonathan Chaimberg, the Canadian National Wrestling team and many others. It is a nearly identical list of coaches that have been used by current UFC welterweight champion and training partner Georges St-Pierre. And they’re all putting Makdessi through Hell to make him the best fighter he can.

“The worst thing in the world is a waste of talent. There are so many great fighters in the world who never make it for one reason or another. Even if you're good at it, you still need the right people to help you keep going with it, pushing you. People think being a fighter is such a good life, but being a fighter is a life of misery. You put yourself through a lot of punishment in training. You wake up in pain from the day before, you have to push yourself again and kill yourself in training, you get hurt all the time, you have to cut 20 pounds, you have to diet yourself even with all the hard training and then you have to go fight someone. At the end of the day, I don't know how you look at that and think there is anything fun about it. You have to take this business seriously. Some guys think this is all fun and games, but it is not. It's a very serious thing to be a good fighter and it takes many years.”