All Aleksa Camur Knows Is Winning

The days were winding down to the most important fight week of Aleksa Camur’s young pro career, but some things take precedence over media duties or a trip to the gym, so the week before heading to Las Vegas for Saturday’s bout against Justin Ledet, the 24-year-old was in church before celebrating the Serbian holiday Slava with his family.

“It’s a big thing in Serbian culture,” said Camur, who stays close to his roots, even though he and his family have been living in Ohio for much of his life.

It’s a good sign that Camur is treating his UFC debut like any other fight, even though it’s far from that. But he’s also had some help from his coaches and teammates at the Strong Style MMA gym in Independence, including a longtime training partner who just happens to be the UFC heavyweight champion.

“Stipe (Miocic) and everyone else did a good job of prepping me for this,” Camur said. “It feels a little different and there’s a lot more on the line, but I feel like I’m where I need to be. I’ve been working for this position for a while, and now that I’m here, I’m ready to have some fun and do what I know how to do.”

All Camur knows at this point in his career is winning, to the tune of a perfect 5-0 record in which he’s ended each fight by knockout. He even owns three Golden Gloves titles in Ohio, though he makes it clear that his heart was always in MMA.

“MMA was always the plan,” he said. “At Strong Style they have a really good thing that they want to do for all the fighters so I had some kickboxing fights before, I had boxing and then I went in some jiu-jitsu tournaments and they get you into all different types of martial arts before you get into your MMA fights. So while I was doing my amateur MMA fights, I was doing my Golden Gloves stuff. The boxing was just to prep for MMA and keep my hands fresh.”

So no thoughts of the ring, then?

“It crossed my mind, but I’m so attracted to MMA that I couldn’t even think like that,” said Camur. 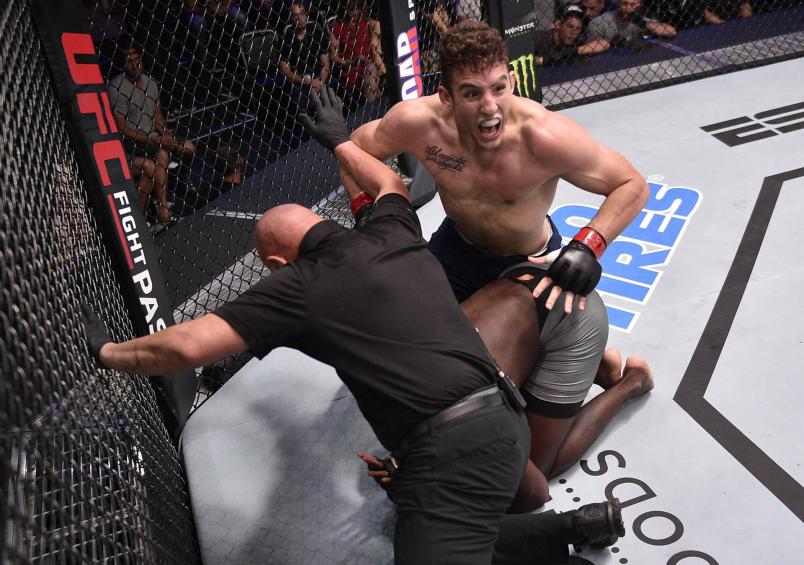 It was a good call, since a fighter of his size would likely wind up in the cruiserweight division in boxing, and that’s a weight class that has had more than its share of trouble getting noticed since its creation. In MMA, Camur is a light heavyweight and in the UFC, that’s traditionally been one of the sport’s glamour division. So was his decision to stick with MMA a business decision or something else?

“Honestly, I think it’s just the love for the sport itself,” he said. “I think I was conditioned to love the sport by being around the people I’m around every day – Stipe and (coach) Marcus (Marinelli) and all the other great people at Strong Style. That made me love MMA a little bit more than boxing.”

He’s in good hands with Marinelli, and with Miocic always close by, it’s an advantage few fighters have. And that’s reflected in Camur’s low-key demeanor and blue collar approach to the game. There’s no entourage, no flashing lights; Camur is a fighter, plain and simple.

“I don’t know if it’s a Strong Style thing or an Ohio thing, but I do notice that as well,” he said when asked how that gym and that region of the country has managed to produce so many no nonsense competitors who keep the drama to a minimum. “We’ve got a lot of good people, they’re down-to-earth at Strong Style and Marcus is a great coach. The media and everything, it doesn’t get to everybody as it usually does.”

The world got a taste of who Camur is as a fighter and person last summer when he blasted his way to a UFC contract by knocking out Fabio Cherant on Dana White’s Contender Series. Now he’s in the big leagues and getting a tough test right out of the gate in Ledet.

“He did have success as a heavyweight and then he fought two tough guys at light heavyweight, so I’m definitely not overlooking him,” Camur said of his opponent. “He looks like a well-rounded fighter who knows what he’s doing, so I’m coming in ready to go, ready for anything, and he’s got my respect. I’m not gonna look past him.”

And should Camur go the distance for the first time at UFC 246, he’s not rattled by the possibility.

“I think every fight you’ve gotta look at it as a three-round war,” he said. “If you’re not going into a fight like that, I don’t think you have the right mindset. Anything is possible, and a fight’s a fight; everybody’s got a chance. I have my game plan and my plan is to win and I know I’m gonna win. I don’t know how I’m gonna win, but we’ll see on fight night.”