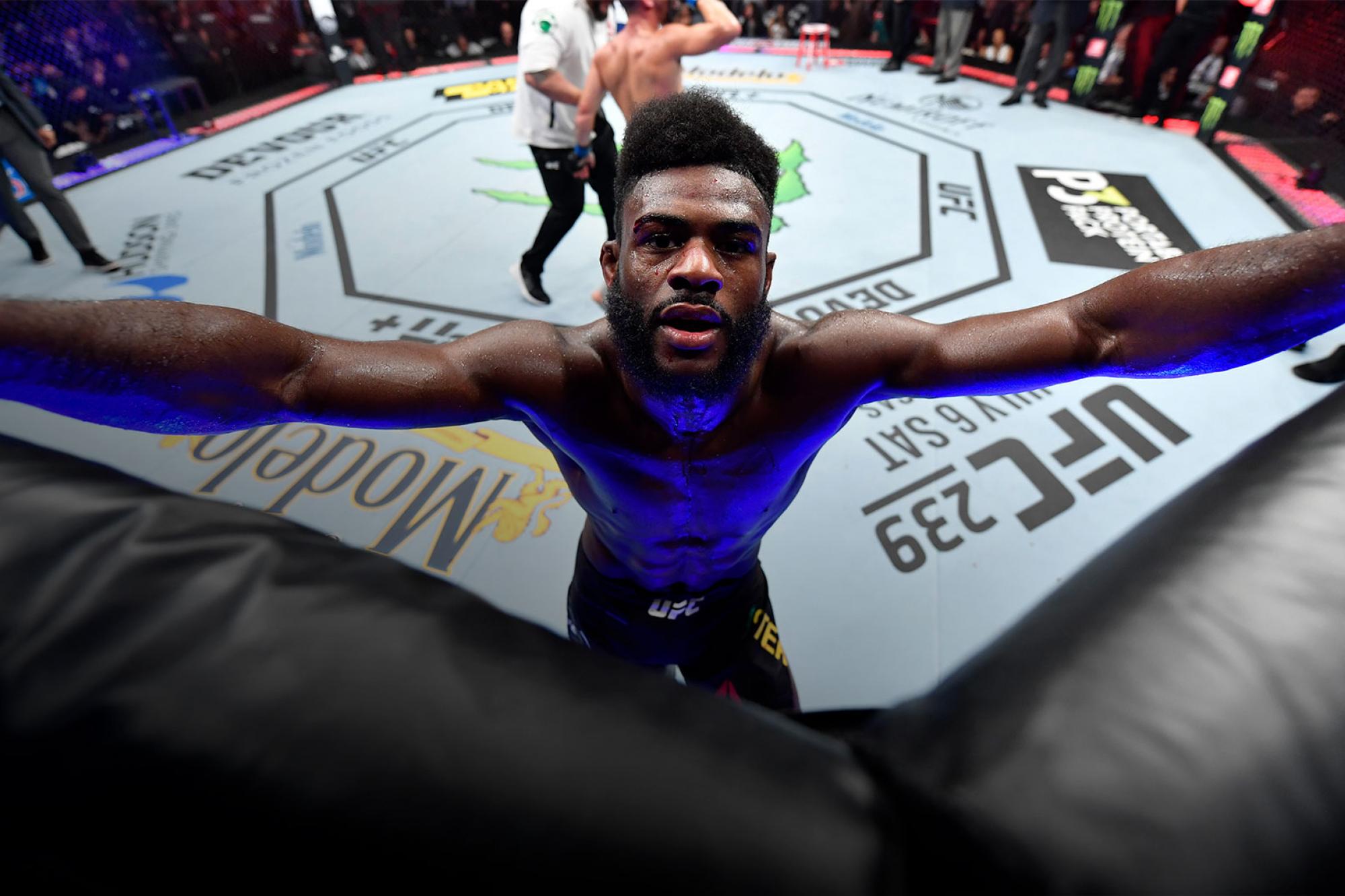 Aljamain Sterling Ready for ‘Race to The Throne’

Aljamain Sterling knows this is time to make a run at the UFC bantamweight title
By Zac Pacleb, on Twitter: @ZacPacleb • Jun. 3, 2020

When Aljamain Sterling saw Henry Cejudo announce his retirement after beating Dominick Cruz at UFC 249, he felt a mixture of excitement and a released frustration.

“My first thoughts were, ‘Good riddance. Good for him, but good riddance,’” he said, laughing. “Outside of that, it’s like, yeah, the division can get moving finally. We can get the UFC back to making the best fight the best.”

Sterling has long advocated for the division to move forward when TJ Dillashaw focused on a flyweight title and then Cejudo’s long layoff after capturing the bantamweight belt last June, and for good reason. In Sterling’s most recent bout against Pedro Munhoz, “Funk Master” landed a bantamweight record 174 significant strikes en route to a unanimous decision win. Coincidentally, the bout came on the same night Cejudo’s “Triple C” run started, but it was arguably Sterling’s most impressive performance to date.

Nearly a year has passed since that accomplishment, though, as Sterling decided to take care of a wrist injury he said had plagued him throughout the last four years. Now healed, he is excited as he is at full strength ahead of a critical UFC 250 bout with rising contender Cory Sandhagen.

“I think it’s going to add that wrinkle back to my game of the grappling that people are so used to seeing from me,” Sterling said. “Of course, it’s never fun to be away for that long, but just to get back in the mix, it’s much better in an exciting time like this for the bantamweight division. It’s on fire right now. I would argue it’s the best division hands down, from 1 to 15.”

That depth is part of what makes his opponent’s ascension impressive. Sandhagen is undefeated in five UFC bouts with three finishes, and he is coming off a relatively dominant unanimous decision win against perennial contender Raphael Assuncao.

Sandhagen’s steady rise through the ranks has even impressed Sterling, who feels that the similarly long and rangy Sandhagen has a better CV than rumored title challenger Petr Yan.

“I would argue that Sandhagen’s body of work is better than Petr Yan’s,” Sterling said. “I look at his wins over Assuncao and John Lineker alone, and I think for his short career, on paper, he has a better resume. Petr Yan beat (Urijah) Faber. Yeah, Faber is a mainstay in terms of being the guy from the past. Faber knows himself. He said it himself. The old Faber would’ve been able to take that shot and walk through it and keep coming, but you get a highlight reel win like that, and everyone starts to go crazy, but then the real ones know you beat a guy who just came back out of retirement who is over 40 years old. You don’t get brownie points for that. Obviously, I know Petr Yan is good. He is talented, but he’s human just like everybody else. I’ve seen a lot of holes in his game, and I would’ve loved to be the one to give him his first UFC ‘L.’ Unfortunately, I couldn’t but, like I said, I think Sandhagen has the got the resume.”

Sterling went as far to say he feels this matchup feels like the “real title fight” instead of the rumored matchup between Yan and Jose Aldo for the now-vacant belt. While Sterling feels that is “probably not the right fight,” he isn’t taking his attention off Sandhagen, whatsoever. Although Sterling conceded Sandhagen has the better hands “on paper,” the New Yorker believes he showed his rising confidence when he stood with Jimmie Rivera and outstruck Munhoz.

The bout is physically intriguing, as well. Sterling mentioned his intrigue in fighting someone who is taller than him for the first time in a while, as well as fighting in an empty, quiet environment. Normally one to spar with music, he and his training partners opted to train in silence to get used to hearing his coaches without any auditory impediment. Even though Sterling said he’ll miss hearing the chorus of fans, the crowd-less environment has its benefits.

The winner of this fight could very well stare a title shot in the face next, and it’s hard to remember when the division felt this wide-open. For Sterling, it seems like his skillset and health is coming together and rising to a consistently elite level at the right time, and having the chance to announce himself as the worthy title-challenger is all he wanted.