Aljamain Sterling is having a good time.

He’s holding the mic with his right elbow high, snarling like he’s dropping the hardest verse Long Island has to offer. While he isn’t actually rapping, Sterling is laughing between each answer providing more than a few one-liners that drip with swagger.

“The Funk Master is coming for gold,” he told UFC.com.

Although the bantamweight title fight happening on June 8 doesn’t include Sterling, he has the chance to stake his claim at the next title shot when he takes on Pedro Munhoz at UFC 238. Knowing the weight of the fight pushes Sterling, but he is aware and focused of the work to be done before he gets to go five rounds for the belt.

“Pedro is the first opponent,” Sterling said. “I gotta get through that guy if I even want to talk or dream about getting the title. Pedro Munhoz, June 8 is coming, and I’m going to lay the smackdown on you.”

Sure, Sterling is having fun in his interview and providing strong trash talk, but he also knows to keep his emotions in check. Sterling – much like his fighting style – contains multitudes, and this maturity is part of what has him on a 3-fight winning streak, his last loss coming to bantamweight title challenger Marlon Moraes.

Sterling saw ups and downs in his UFC career, but heading into his 13th fight in the promotion, the 29-year-old knows this is the biggest bout of his life. 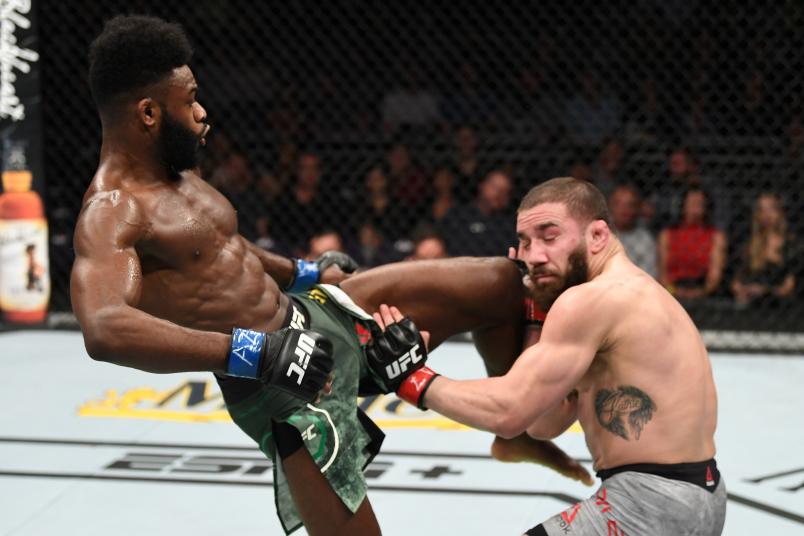 Always one to study his opponents psyche before stepping into the Octagon with him, Sterling believes he already has the upper-hand psychologically and is exposing Munhoz.

“I’ve learned that Pedro Munhoz is emotionally invested in this fight,” Sterling said. “That’s a bad thing for anybody. I made sure I learned my lessons along the way, and I learned that this is no place to have emotions. That’s how things happen, you get hurt, and I’m looking to go out there and put it on him. I learned a ton about him. I think he showed his real colors. I think he realizes that people started to realize he’s not as polite as we once thought he was, and I’m going to have to lay the funk down on him.”

Munhoz is far from a slouch and is on a 3-fight winning streak of his own. His most recent fight was an uptempo, one-round brawl against Cody Garbrandt that ended when Munhoz’s haymaker beat Garbrandt’s, dropping the former champ. The win was the second first-round finish in a row for Munhoz, but that rock ‘em sock ‘em style doesn’t impress Sterling all too much.

“It’s not going to cut it on the night.”

In Sterling’s last fight (a unanimous decision win over Jimmie Riverain Phoenix), he pleaded for “no more tie-ups” in the bantamweight division in reference to the rumored rematch between Henry Cejudo and then-bantamweight champ T.J. Dillashaw for the 135-pound title. With Dillashaw serving a two-year suspension and Moraes now going for the open belt, Sterling is more open to Cejudo’s bid, saying it’s a “good thing we got some type of direction with the division now.”

That direction has Sterling right at the doorstep of a title fight, and he’s enjoying the benefits of his recent success. For Mother’s Day, Sterling bought his mother a home, an experience he called “absolutely incredible.” While the place needs some renovations, Sterling joked about partnering up with teammate Al Iaquinta and upping his real estate credentials.

“It’s been nothing but a big burden off of my shoulders,” Sterling said. “Especially for her, to finally have her own roof over her head, one that she can call her own, her own place that’s hers, and nobody can take it from her.”

With a win in the United Center on June 8, Sterling could find himself that much closer to obtaining a UFC belt, and on a stacked card, a memorable performance could give him the financial boost he needs to get those renovations done on his mother’s house.