Aljamain Sterling: The Funk Master to Flex his Talents in NJ 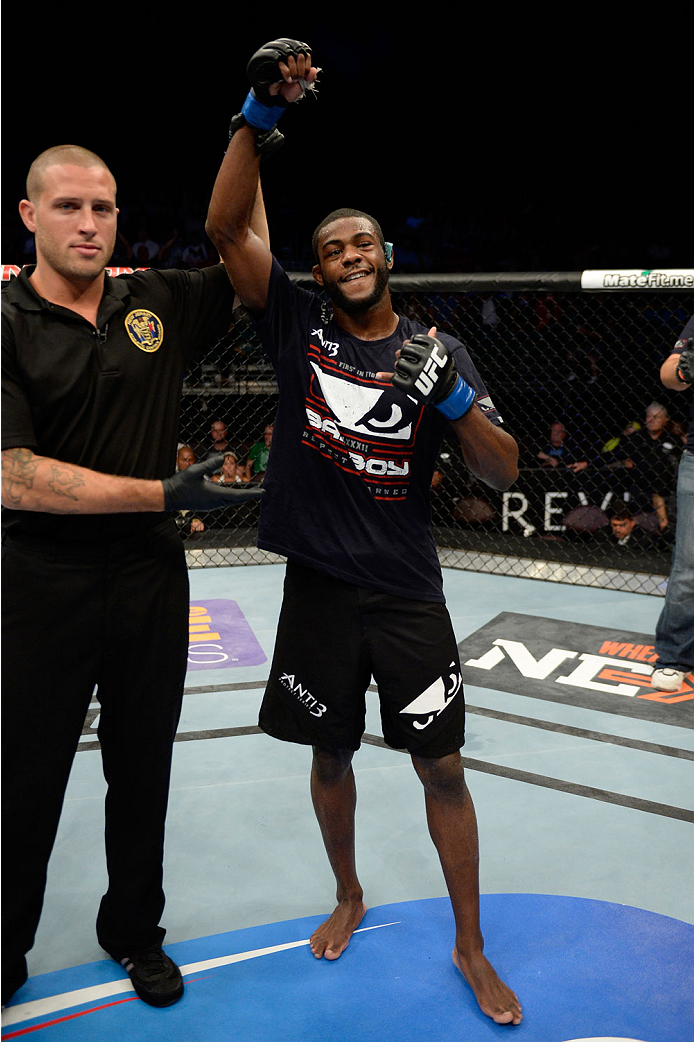 While there is no specific formula in place for a fighter to become a star in the UFC, Aljamain Sterling possesses plenty of the necessary qualities to make that happen.

The 25-year-old bantamweight prospect comes equipped with the caliber of skill that had people in the MMA community raving about his talents long before he made his official UFC debut back in February of 2014, and he’s validated those expectations in both of his Octagon showings since arriving to compete on the sport’s biggest stage.

“The Funk Master” stepped up on short notice and bested Cody Gibson in his debut, then put away savvy veteran Hugo Viana in his next appearance five months later in Brazil. Both fights showed why there are plenty of reasons to be excited about the undefeated Serra-Longo product, but Sterling’s talents beyond the Octagon are equally impressive.

Despite being a new face in a sport that continues to move at a rapid pace with every coming year, the Long Island native approaches his career in MMA with the regard of a proven veteran. While he’s eager to make as much progress as possible, Sterling is keenly aware that taking measured steps and allowing his skill set and his profile to grow at the right pace is an incredibly important element for success in a highly competitive sport.

He understands everything that comes in his career is the product of his own hard work, and there is a significant amount of importance in enjoying the fruits of his labor. Where many fighters wake up and learn to appreciate the additional elements of their careers toward the end of their time under the spotlight, Sterling already has a firm understanding of how crucial it is to live in the here and now.

Working alongside champions past and present on a daily basis has assisted Sterling in obtaining this education and it’s one he considers priceless. He knows to keep his head on straight and take everything as it comes…even when things may not fall exactly as he wants them to. When his bout against Frankie Saenz at Fight Night: Rockhold vs. Bisping was cancelled just days before he was set to step in, rather than get worked up into a fit, Sterling kept his cool.

Although he was primed and ready to go after weeks spent inside the gym, and his chance to show his skills never came, Sterling was able to keep his eyes wide open and take in just how far his career in MMA had already taken him.

“When I found out my last fight was cancelled I was already in Australia,” Sterling said. “After the card I was able to hang out a little bit and got to see some things that opened my eyes to what the possibilities were in this whole fight game. It made me want more. I was able to see if I keep working hard and doing what I’m doing I’ll get to travel the world and see things I’ve never seen before. I’ll get to do all these amazing things just by doing something I already love to do. That’s pretty amazing.

“I’m learning to really live in the moment and enjoy everything as it’s happening. Sometimes it can all get to be a bit much and pretty overwhelming, and I’m not even at the top yet so I can only imagine what it is like for those guys, but you have to take it for what it is and enjoy it all because you never know how long it is going to last.”

While his chance to resume his run up the bantamweight ladder in Australia was stalled due to circumstances beyond his control, Sterling’s next opportunity to get back to work is rapidly approaching. He will square off with 135-pound staple Takeya Mizugaki at UFC Fight Night: Machida vs. Rockhold this Saturday night in Newark, New Jersey.

Where his initial two showings inside the Octagon have come against fighters with a similar amount of big stage experience, throwing down with the Japanese veteran will be a different type of animal. Mizugaki has been a mainstay in the bantamweight ranks for the better part of the past decade and has mixed it up with a collection of the best talent to come along over that stretch. He’s been part of some of the best matchups to take place in the bantamweight division over the past few years, and Sterling sees the bout as a perfect opportunity to move toward the elite tier of the 135-pound weight class.

In Mizugaki he will have a high-caliber opponent who has made a career out of being as scrappy as they come once the Octagon door closes, and with the fight being on FOX, Sterling will have the biggest platform of his career to work on. Those elements combine to create the ideal situation for Sterling to let his talents shine and provide an immense amount of motivation for a fighter who comes pre-wired to deliver excitement.

“It’s pretty cool to be fighting on FOX,” Sterling said. “I didn’t know that was the case originally. I thought I would be fighting on FOX Sports 1, but thing found out that the televised card is on FOX so that’s awesome. It’s a lot of exposure and a good opportunity for me to get my face and name out there and hopefully make a lot more money.

“But Mizugaki is no joke, man. He’s a tough opponent as he’s always game. He’s fought a who’s who of the bantamweight division and he’s been around for a long time. But I think he’s going down the ladder of his career and I’m on the way up. I’m a young blood coming up in the game.

“I also think my chest is a lot bigger,” he laughed. “I think that is going to be a big difference in this fight. My chest muscles are way bigger than his are. I’m going to be out there flexing.”