As He Looks To Defend His Bantamweight Crown At UFC 273, We Take A Look At Aljamain Sterling's Five Greatest Hits
By Thomas Gerbasi, on Twitter: @TGerbasi • Mar. 29, 2022

The co-main event of UFC 273 on April 9 will feature one of the most highly anticipated rematches in recent history, as UFC bantamweight champion Aljamain Sterling defends his crown for the first time against the man he won it from, interim titlist Petr Yan. It’s a pivotal bout for the “Funk Master,” whose five defining moments we revisit below.

Unbeaten bantamweight prospect Aljamain Sterling likely locked up a spot in the top 15 at 135 pounds, as he scored the biggest win of his career, submitting the number six-ranked Takeya Mizugaki in the third round.

The first round was a battle of wills, but not a particularly action-filled one, as Sterling mauled Mizugaki against the fence for much of the frame in an attempt to score a takedown. He got two late, but Mizugaki bounced right back up both times.

Switching stances to throw Mizugaki off, Sterling was able to find an opening for a quick takedown early in round two, but against Mizugaki was up almost immediately. What the Kanagawa contender wasn’t able to do was shake free from his opponent’s grasp consistently, and when he did, his striking game wasn’t paying any dividends at all. Midway through the round, Sterling got Mizugaki to the mat and was finally able to keep him there for more than a few seconds, taking his back in the process, where he stayed until the bell.

There was more of the same in the third, but this time, Sterling saw what he wanted to see from his opponent and he pounced, catching Mizugaki in an arm triangle from the bottom position, with the Japanese contender tapping out shortly thereafter at 2:11 of the final round.

New York’s Aljamain Sterling ended his grudge match with fellow bantamweight contender Cody Stamann with style, submitting his foe in the second round.

The first round was nip and tuck throughout, with both fighters having their moments, but Sterling clearly had more weapons at his disposal on the feet and the mat, and by the end of the round, Sterling had to be feeling good about the way things were going. 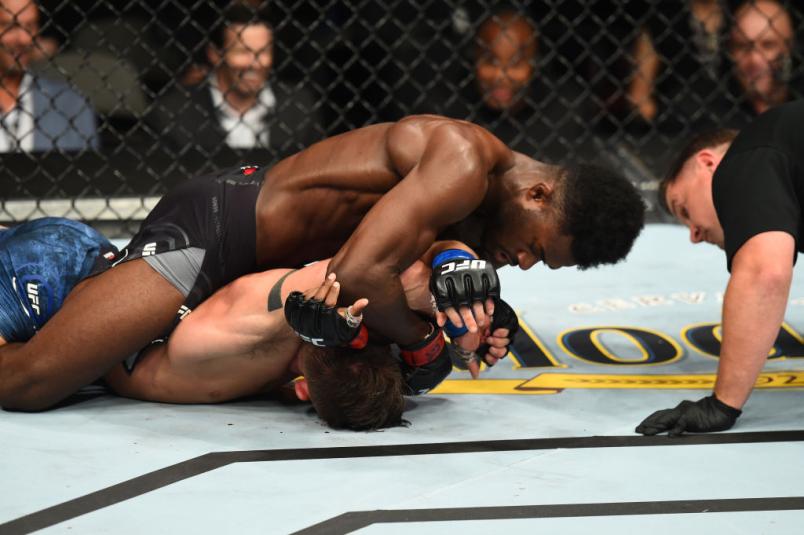 In the second, Sterling pulled away, and when he got the back mount on Michigan’s Stamann, it was just a matter of time before the “Funk Master” closed the show, and at 3:42 he did just that, locking in a “Suloev Stretch” kneebar that forced Stamann to tap out.

Long Island’s Aljamain Sterling made a strong case for a shot at the 135-pound title, as he beat fellow top five contender Pedro Munhoz via unanimous decision.

Sterling used his range to great advantage in the first round, and his striking looked better than ever as he mixed things up and frustrated Munhoz at every turn.

A body kick by Munhoz appeared to stun Sterling in the first minute of round two, and the exchanges began to get closer as the Brazilian began to draw the New Yorker into sporadic firefights. Sterling did land some hard shots midway through the round to keep Munhoz honest, but the Brazilian’s pressure was slowing the “Funk Master” down. In the closing minute, Sterling surged again, setting up what promised to be a very interesting third stanza.

And it was interesting, as Munhoz’ kicks to the leg kept coming while Sterling worked his punches upstairs in rapid-fire fashion. As the bout closed, both slugged it out as the crowd roared, capping off an entertaining three-rounder won by Sterling via identical scores of 30-27.

Aljamain Sterling left no doubt in making his case for a shot at the bantamweight title, as he finished Cory Sandhagen in spectacular fashion, ending the bout via submission in the first round.

Sterling tore after Sandhagen as the fight began and quickly got him to the mat and took his back. The New Yorker’s first rear naked choke attempt didn’t hit the mark, but the second did, with the end coming at 1:28 of round one.

It wasn’t the way Aljamain Sterling pictured winning the UFC bantamweight title, but he is the new champion of the 135-pound division after an illegal knee on a downed opponent disqualified Petr Yan in the fourth round. 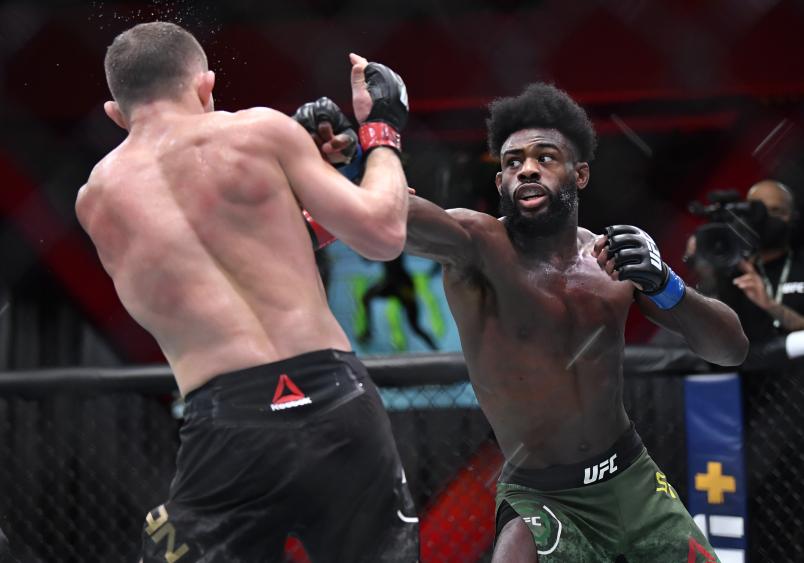 Sterling had a good first round as he mixed up his striking attacks and kept a busy pace. Yan got in some shots of his own, but wasn’t able to break the Coloradan’s rhythm.

Yan’s kicks were putting money in the bank for the Russian, but the same could be said for Sandhagen’s body shots as round two got underway. And as Yan settled into the fight, the standup exchanges got a lot more heated, with each fighter having their positive moments.

Sterling opened with a kick to the body, immediately pressuring Yan with a variety of strikes. A minute in, a knee to the head momentarily stunned Yan, and the champion tripped Sterling to the canvas in response moments later. Another Sterling knee landed once he rose, and midway through the round, he scored a takedown. Yan got back to his feet quickly and after a quick clinch, Yan dropped the challenger with a flush right hand. Sterling recovered quickly and took the fight to the mat, but Yan didn’t stay grounded. Instead, it was Yan getting his own takedown late in a furiously paced round.

Going all-in for a takedown in the second minute of round two, Sterling was turned away by Yan, who defended well and broke free briefly at the midway point of the frame. Sterling went right back into the clinch as he tried to ground his foe, but again, it was Yan defending well and coming back with some hard strikes. Sterling kept throwing as he pressured Yan, but once again it was a takedown by Yan punctuating the round.

Yan had his most dominant round in the third, with three takedowns and a series of accurate strikes landing as Sterling began to slow down, and while the New Yorker kept pressing, Yan’s shots were doing more damage. But right when it looked like Yan was pulling away, he landed a flush knee on the downed Sterling, bringing an immediate stop to the bout. The Octagonside physician was called in and it was clear that Sterling was in no shape to continue, with referee Mark Smith waving the fight off at 4:29 of the fourth round.