Alistair Overeem Was Born For This

After more than two decades in the fight game, Alistair Overeem still has a passion for his craft and a love for the day-to-day grind that is required to remain one of the elite heavyweight competitors in the sport.

“I love to train, I love to stay active and I love to be in the gym,” said Overeem, who returns to action against streaking Jairzinho Rozenstruik in the main event of this weekend’s card at Capital One Arena in Washington. “I don’t have to do anything, but I do like to train and I like to develop and there is always stuff that I’m working on.

“I think that if you don’t enjoy training, it stops right there, but if you like to train, like to be in the gym and stay fit, stay on the diet, it all changes.”

Having transcended eras and established himself as one of the greatest heavyweights of all-time, the 39-year-old Dutch superstar is at a point where he could start winding things down if he were so inclined, opting for assignments against fellow veterans in the latter stages of their career rather than continuing to step into the cage against the best the division has to offer every time out. 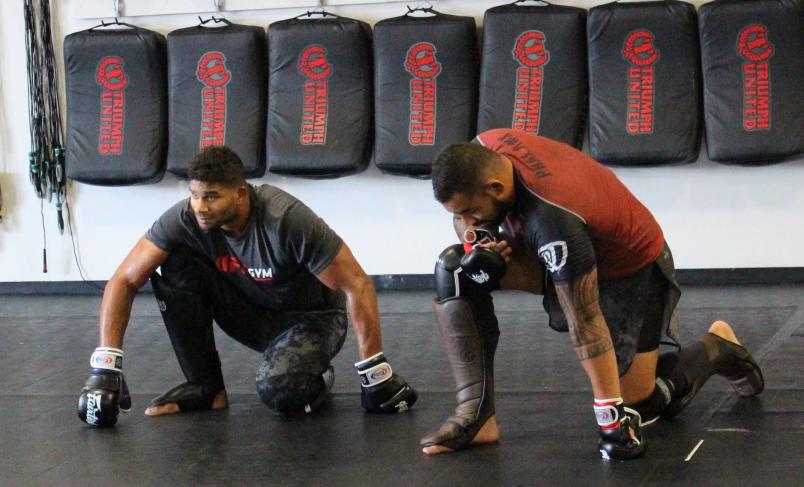 But that’s not how Overeem is wired.

“I think I’m very competitive by nature,” admitted the former Strikeforce, Dream and K-1 world champion. “With everything I do, I have to win. It could be a game of cards, a game of chess, whatever — I want to win — and what you’re seeing with the fight game is channeling that competitiveness into the preparation and it’s paying off.

“I’m still enjoying every day, every second and still creating that development in myself as a fighter, which shows in my results.”

Father Time is undefeated in combat sports, and following back-to-back stoppage losses to Francis Ngannou and Curtis Blaydes, many wondered if those results were a harbinger of things to come for Overeem. His loss to Ngannou was one of the scariest knockouts in UFC history and he came away from his encounter with Blaydes busted up and bleeding, having looked more overmatched in each of those two contests than he had in any of his previous losses inside the Octagon.

Rather than continue sliding, Overeem did what he’s done throughout his career — he changed things up, connecting with Blaydes and joining his former opponent as a member of the Elevation Fight Team in Denver, Colorado. He got insights from new coaches, addressed shortcomings in his game and fortified strengths before returning to the cage and posting consecutive first-round stoppage victories over Sergei Pavlovich and Aleksei Oleinek to re-affirm his standing as one of the top talents in the UFC heavyweight division.

“(Every fight is about) legacy, career, the hunt for the belt, but it’s also baby steps and so we needed those steps to get to where we are now,” he said of the two victories that carry him into the Octagon this weekend. “Just as we need this fight, this victory to inch back into title contention.”

Originally slated to face Walt Harris this weekend, Overeem instead will collide with Rozenstruik, who has made an immediate impact during his rookie year on the UFC roster.

After debuting with a second-round stoppage win over Junior Albini in February, the 31-year-old from Suriname has needed just 38 seconds to earn back-to-back eye-opening victories over Allen Crowder and Andrei Arlovski to establish himself as an emerging threat in the heavyweight division.

“He’s definitely a dangerous guy, a dangerous opponent and you can see that in his three UFC wins, which are all fairly quick,” Overeem said of his main event opponent. “We definitely have to respect that and watch out for that, but I feel real confident in my abilities. We’re better, we’re fit, we’re strong and we’re very ready for a victory on Saturday.”

Currently stationed at No. 6 in the rankings, Overeem is once again in the thick of the title chase in the heavyweight division, and while he admits the shift in opponents has forced him to adjust the blueprint he’s laid out for himself heading into 2020, it’s a shift the 20-year veteran is more than equipped to deal with.

“For me, it’s a case-by-case situation and first I have to focus on Rozenstruik,” he began, “but when you have a winning streak of three you’re certainly close to earning a title shot.

“I was planning on talking about the title after a win over Walt Harris, but Walt had to pull back. Rozenstruik is ranked a little back, so realistically we have to win one more for me to have a title shot.”

Thus far, the UFC heavyweight title is the one piece of hardware that has eluded Overeem’s grasp.

He’s been in the thick of the title chase since debuting inside the Octagon with a dominant effort against Brock Lesnar nearly eight years ago, and he challenged Stipe Miocic for the title at UFC 203, falling to the current champion on his home turf in Cleveland. Back on a winning streak and slated to face the most talked about new arrival to the division in a number of years, a victory would surely bring him one step closer to earning a second title shot and a chance to capture the one title that has escaped his grasp to this point in his career.

But where he was fixated on adding the UFC heavyweight title to his collection at the outset of his arrival in the Octagon, Overeem now admits he could still be completely satisfied with his career without the UFC belt adorning his mantle.

“I definitely can because I do this for the adventure,” he said. “I was born to go for it, to make a run for it and I’m doing what I’m meant to do. If it’s going to pay off or not, I’m enjoying the ride.

“I enjoy going to the gym, I enjoy the different stages of my career — the high points, the low points — and I’ve been through the thick and thin of it. I just really get a good feeling from putting everything into it, and if it will work out or not is not in my hands. Everything that is in my hands, I’ve put into it.”