“I don't know, but for some reason I had this feeling I would be given a chance at a title shot,” Bagautinov told UFC.ca through a translator. “I watch all the fights in my (weight class). So I try to keep abreast of everything that's going on.” 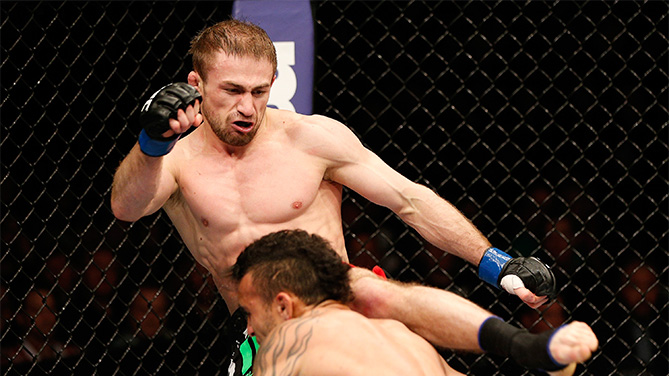 Even before he received the call, Ali Bagautinov had a feeling he would be challenging Demetrious Johnson for the flyweight championship.

Since debuting in the UFC last year, the Dagestan native has made waves in the 125-pound division. After finishing Marcos Vinicius with punches in front of a hostile Brazilian crowd in September, Bagautinov earned consecutive decision victories over Tim Elliott and John Lineker.

Immediately following his win over Lineker at UFC 169 four months ago, Bagautinov checked the UFC's official rankings and discovered he'd broken into the top five. Since each fighter ranked above him had suffered recent losses to Johnson, Bagautinov knew he was next in line.

“I don't know, but for some reason I had this feeling I would be given a chance at a title shot,” Bagautinov told UFC.ca through a translator. “I watch all the fights in my (weight class). So I try to keep abreast of everything that's going on.”

Bagautinov gets his opportunity to dethrone Johnson in the headliner of UFC 174 in Vancouver, B.C. June 14. The co-main event features a pivotal welterweight bout between Rory MacDonald and Tyron Woodley. Also, former heavyweight champ Andrei Arlovski returns against Brendan Schaub.

Not only would a win over Johnson be the culmination of all his hard work in both mixed martial arts and Combat Sambo, it would earn Bagautinov the distinction of being the first Russian titleholder in UFC history.

The heavy-handed striker also recently became a father, welcoming his first-born son. It goes without saying that a victory would allow him to further support his family.

Bagautinov admitted a lot is riding on his fight with Johnson.

“I think that you will see more and more fighters from Russia (in the UFC). We have a lot of very successful and very promising fighters. I believe that they might be champions and titleholders in different categories, in the future.”

Though Bagautinov is on the cusp of making a better life for himself and his loved ones, his road to a title shot has been bumpy.

A recent report from MMABoxing.ru claimed the fighter failed a 2012 drug test and was retroactively suspended for two years by the International Sambo Federation. According to the article, Bagautinov was flagged for methylhexanemine, a dietary supplement and stimulant commonly found in nasal sprays that is prohibited by the World Anti-Doping Agency.

Bagautinov has since called the report bogus, stating that had he been suspended, he wouldn't have been allowed to compete in Sambo bouts in Russia. He also said the incident hasn't interfere with his training camp.

“I never even thought about it,” Bagautinov said bluntly. “It did not affect my training. I would say that I did experience some indignation as to why this nonsense suddenly came up. But it didn't damage me or hurt me in any way because I am focused on my training and my preparations.”

With the drug accusation behind him at least for now, Bagautinov has to get the job done against Johnson, who has proven to be a difficult puzzle to solve.

Since capturing the inaugural flyweight championship in 2012, 'Mighty Mouse' has been as impressive as any champion on the UFC roster.

Johnson's toughness was on display in his first title defence in early 2013, as he rallied to win a unanimous decision over John Dodson. He then put on a dominant display against John Moraga last July before sealing the deal with a fifth-round armbar submission. In December, he became the first fighter to finish Joseph Benavidez by uncorking a vicious right hook for the stunning knockout win.

Though Johnson's speed, footwork and timing have given other contenders fits, Bagautinov said he's figured out the flyweight champion's style.

“In my understanding, his style is to actually crock up his opponent and then to win during the fourth or fifth round,” Bagautinov said. “I think he's trying to play it safe by not risking too much. He's running around the cage and looking for the ninth corner. The cage has eight corners, so it's as if he's looking for the ninth corner, then (he tries to deliver) the decisive strike, with a decisive result.”

Though Johnson's speed and slick striking are often considered among his best tools, Bagautinov feels his power and grappling will get the job done.

“As I've said before, God willing, if I get the title it will be the result of everything that I have been doing for all these years,” Bagautinov said.

“You can expect a beautiful and good quality fight.”