Read on for UFC 220 prelim results… 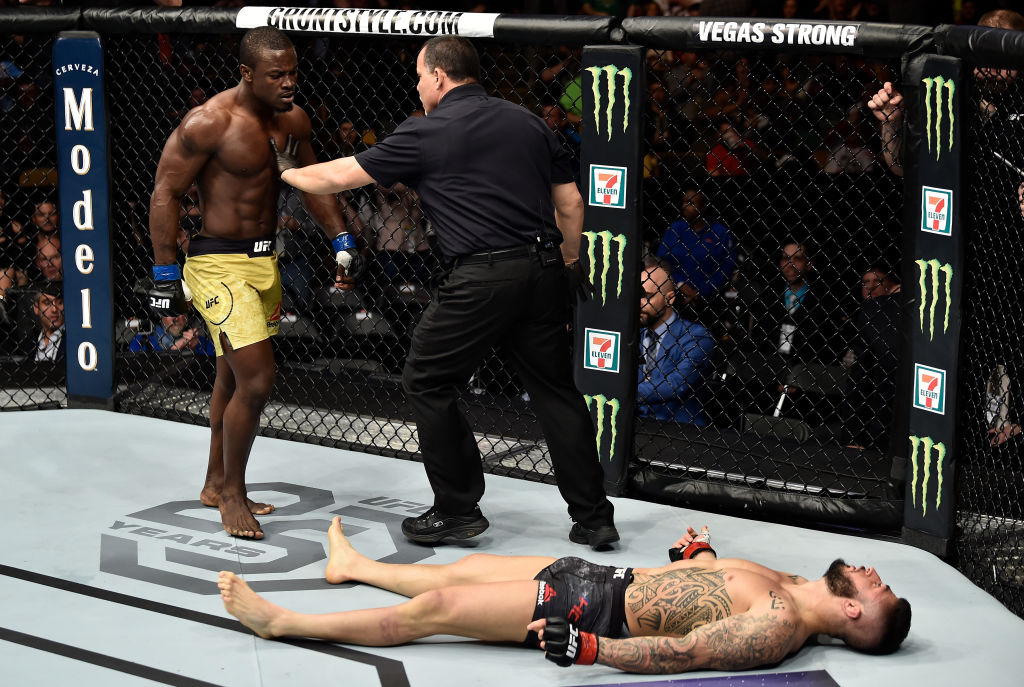 After a 1-2 start to his UFC career, Boston’s Kyle Bochniak needed to come up big at home in TD Garden and he did just that Saturday night, winning a three-round unanimous decision over debuting featherweight Brandon Davis in UFC 220 prelim action.

Bochniak had a good first round as he forced Davis to chase him, then pelted him with counters until he worked his grappling game in the latter stages of the frame. Davis appeared to get the local favorite’s attention with hard leg kicks and an equally solid knee to the head in round two, but Bochniak wouldn’t slow down, as his stick and move strategy continued to pay dividends in rounds two and three, allowing him to take a hard-fought victory.

Welterweight up and comer Abdul Razak Alhassan removed any doubt in his rematch with Sabah Homasi, as he repeated his first victory over “The Sleek Sheikh,” knocking him out in the first round.

After a controversial referee stoppage in their initial meeting in December, Alhassan had to hold off a strong start from Homasi, but a right uppercut by the Ghana native put an end to the fight immediately, with referee Steve Rita halting the bout at 3:47 of the opening frame.

Dustin Ortiz fought his way out of first-round trouble against Alexandre Pantoja and took the next two frames to win a unanimous decision in a meeting of flyweight contenders.

Pantoja appeared to be on the verge of a finish on several occasions in the opening round, as he took Ortiz’ back on the mat and kept him there until the Tennessee native fought free with 34 seconds left and even took Pantoja’s back before the horn.

Ortiz came out fast for round two, trying to get a round back after the rough first frame, and he swarmed Pantoja with his striking and grappling as he wore down his foe, and after putting another workmanlike round in during the final five minutes, it was Ortiz’ bout via three scores of 29-28.

Ige (8-2) attempted to get his grappling game in gear from the start, but as soon as Arce (14-2) began to find his range with his strikes, he began to take over, and after rocking the Hawaiian with a couple shots in the final 90 seconds of round one, the fight stayed in Arce’s playground.

Ige remained game throughout as he looked to turn things around, but Arce stayed cool and stayed upright, pounding out the win via scores of 30-27 twice and 29-28.

Despite the late call, Bessette was competitive throughout, but after a very close opening frame, Barzola began to pull away, using leg kicks, quick punches upstairs and a series of takedowns to get the victory.

A flush left hand was all it took for Russian lightweight prospect Islam Makhachev to improve to 15-1 as a pro, as he knocked out returning veteran Gleison Tibau in the first round.

Making his first start since November 2015, Tibau never got a chance to get into a rhythm, as Makhachev landed a perfect shot, dropping the Brazilian to the mat. Referee Dan Miragliotta rescued Tibau from further damage, halting the bout at the 57-second mark.