"The UFC sees the potential in the women, and want to give people the
most entertaining fights that they want to see, and that’s going to be
our fight. We don’t disappoint." - Alexis Davis 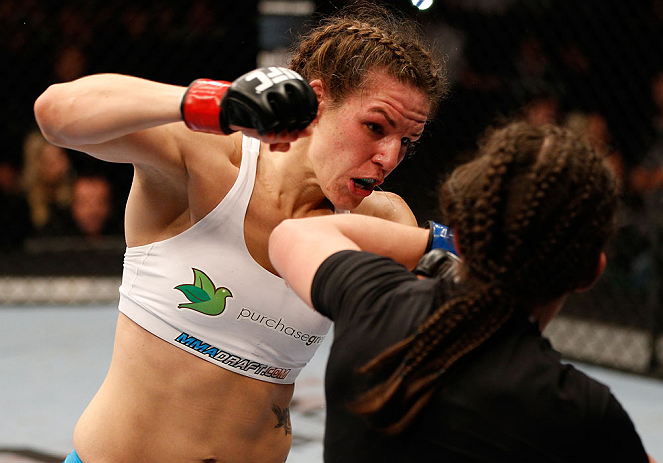 “Once the cage door closes, it’s just my opponent and me.”

“The crowd doesn’t affect me.”

These are just some of the shopworn clichés that get dropped by fighters in the build up to any fight that carries some kind of significance. Whether it’s fighting on the big stage for the first time, competing on foreign soil, or being the local star with a section in the arena reserved for your friends and family, ask any fighter about the potential distractions and outside the cage elements that could potentially impact their performance, and you’re bound to hear some variation of one of the above answers.

Shaking Off The Jitters

Alexis Davis offered up some of those tried and true responses heading into her bout with Rosi Sexton at UFC 161 this past June. Not only was it the Port Colbourne, Ontario native’s inaugural appearance inside the Octagon, but it was also the first time in five years that she was competing in her home and native land, which meant she was that fighter with a section of the MTS Centre in Winnipeg blocked off for her supporters.

“I hate to admit it because I said before the fight, `Nah – I’m going to be fine,’ but yeah, there were definitely some jitters,” Davis admitted with a laugh. “Not so much with the cage, but fighting in almost my hometown, and wanting my UFC debut to be an incredible fight that really puts my name out there. I still feel like I’ve accomplished some of that, but I really wanted to go out there with a big bang, and I imagine so did Rosi, and it turned into a tough fight.

“She’s a tough person to submit and I hate to say this, but she was a lot stronger than I thought she was. She’s a 125er and has fought even lower than that, and I’ve fought some big girls, so I didn’t think she was going to be as strong as she was, but she was a lot more than I expected.

“It was incredible though,” Davis offered in her overall assessment of her experience in Winnipeg. “I thought coming off several fights with Strikeforce, this was going to be pretty much the same, and it was in the background and all of that, but to walk out to that crowd was amazing. The amount of energy was incredible. I can’t even put words to it.”

While Sexton proved to be a more troublesome opponent than she initially expected, Davis was able to come away from her initial UFC appearance with a victory, and extend her winning streak to three. Wednesday night, she’ll look to earn a fourth consecutive win when she takes on former title challenger Liz Carmouche in the co-main event of the third UFC Fight for the Troops event.

Davis has carried a lower profile heading into her sophomore effort than she did in the build-up to her bout with Sexton this summer.

With the women’s bantamweight division further along in its development and the initial curiosity about females fighting in the UFC having dissipated, the 29-year-old, who counts wins over Julie Kedzie, Amanda Nunes, and TUF 18 contestant Shayna Baszler among her 14 career victories, is hopeful that leads to fewer nerves and a little less self-created pressure when she steps into the cage with Carmouche later this week.

“I feel a lot more comfortable,” began Davis, who holds black belts in both Japanese and Brazilian jiu-jitsu. “Coming up to the last fight, I had a lot of pressure on me, and I’ve been trying to keep things more levelheaded this time around; not so much reading up on the hype that comes with it.

“I think with a lot of fighters – myself very much included – you read so much and everyone is talking about the view of all the women and the pressure that comes with it, and it can get to be too much. Thankfully, it’s leveled out a bit – there have been a lot of women’s fights and they’ve all been incredible, so I just want to do what I do and keep up the momentum.

“The amount of support the UFC has given the women’s fighters has been incredible, and I think it’s more than anybody would have ever imagined. They really have backed us all up when a lot of people were kind of afraid that it was going to be “The Ronda Rousey Show,” but that’s not the situation at all.”

The fact that she and Carmouche were tabbed to fill the co-main event slot on this card serves as evidence to Davis’ point, and gave the Canadian a moment of child-like excitement earlier this fall when the poster for the event was released.

“I’m not gonna lie – I was like a little girl when I saw my picture on the poster; I was so excited. I had to send it to my mom and stuff like that. I really think that we deserve it though. Not to sound cocky or anything like that, but both Liz and I are great fighters, push the pace, and we’ll have a very entertaining fight.

“Once again it’s about the support,” she continued. “The UFC sees the potential in the women, and want to give people the most entertaining fights that they want to see, and that’s going to be our fight. We don’t disappoint.”

Future of the Division

This is a pivotal fight, not only for both combatants, but potentially for the complexion of the division as well.

While Carmouche has previously fought for the title and come up short, she’s already rebounded from her UFC 157 loss to Rousey in impressive fashion, finishing Brazilian upstart Jessica Andrade. Given that former champ Sarah Kaufman was just upset by UFC neophyte Jessica Eye and Cat Zingano is still working her way back from two different knee operations, the winner of this contest could potentially end up fighting for the women’s bantamweight title in 2014.

As much as that is a realistic possibility, it’s one that Davis has opted not to think about, choosing instead to focus on the hard-charging former Marine that will be standing across the 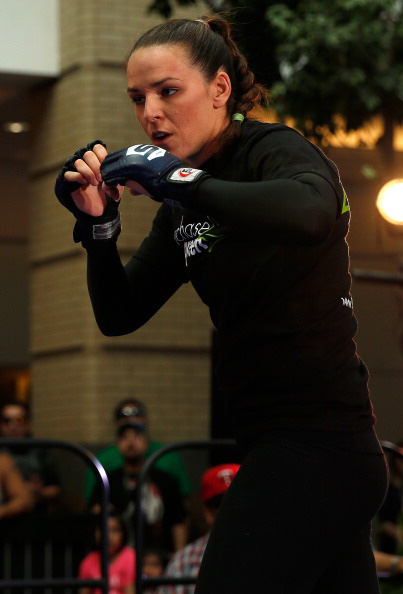 cage from her on Wednesday evening at Fort Campbell.

“We all want a title shot, and every fight feels like you’re getting that one step closer, especially fighting a high caliber fighter like Liz, but I’m just really happy with the direction the UFC is going. There are so many great fighters, and so many more that we haven’t even seen yet, so who knows what’s going to come next and what’s going to happen?

“She almost beat Marloes (Coenen) and had a great fight with (Sarah) Kaufman,” Davis added in her assessment of Carmouche, who carries an 8-3 mark into the cage. “When you watch her fights – even when she’s fought some of the top contenders – the majority of the fights she comes out almost winning. It just seems like the last round or the last couple rounds, she shuts down a little, and I think that’s going to fuel her fire more.

“I’m expecting a hard-fought bout and Liz to come out and fight. I’ve been looking at Liz for a while now, and I’ve said, `If I wasn’t fighting her, I’d be cheering for her to win’ because I like her fighting style – she’s very aggressive and she pushes the pace, and that’s what I’m expecting from this fight.

“I’ve been training cardio, cardio, and more cardio because if you watch any of her fights, she’s pretty much non-stop – she’s pushing you, adding the pressure, trying to get you up against the cage – so I’m expecting an all-out brawl.”

She’s also expecting to be a little more comfortable overall the second time around.

“I’m hoping so, but I was thrown off on the last one, so knock on wood.”