Alexis Davis: The Road Back Begins 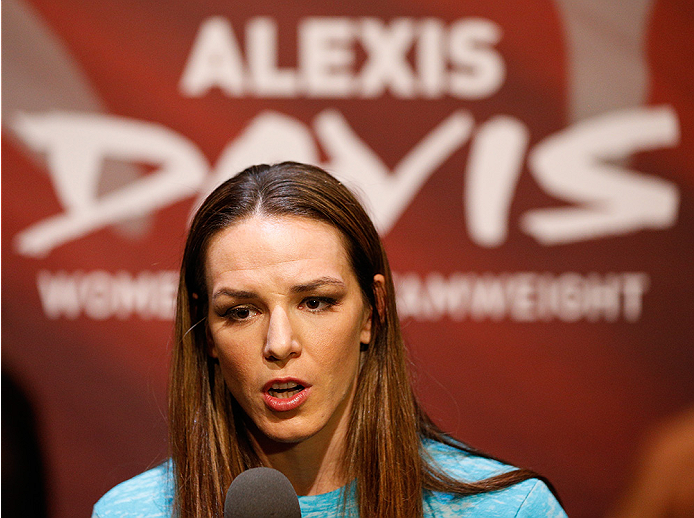 It’s been over nine months since Alexis Davis graced the Octagon, but don’t assume that she went away and requested a long break after her UFC 175 loss to women’s bantamweight champion Ronda Rousey. That’s not how the number three-ranked contender is built. In fact, she cornered UFC matchmaker Sean Shelby right after the Rousey fight with a request for a quick return.

“I saw him at the after party and I told him I wanted to get back there as soon as I can,” Davis said. “But there were problems with scheduling, and I was going to fight before the end of the year, but something happened. The same thing with fighting in March, but it was just getting pushed back, and this is not something that I planned at all.”

Davis will be back this weekend in her home country of Canada, facing a familiar foe, Sarah Kaufman, in a UFC 186 bout at Montreal’s Bell Centre, yet despite the long layoff, she is seeing the bright side of it.

“Sometimes things happen for a reason,” she said. “I didn’t really take a break other than my usual one where I go home, see the family, and spend time there. So I was back in the gym as soon I could, and it was a chance for me to review things and almost work on myself. It was a whole new opponent, and it was me, and I looked at things that I needed to work on and needed to improve.”

It’s hard to find obvious mistakes in her 16-second loss to Rousey. When it happens so fast, what can you say other than she got thrown, pinned to the mat, and punched until the referee intervened? It was a blur. It wasn’t like she was dropping her left hand all night and getting drilled with rights, or that her positioning was off on the mat, leading her to get submitted. It was over almost before it started, but fighters see things differently than we may on the outside, and Davis didn’t leave Las Vegas without a ‘to do’ list of improvements she could make.

“Obviously, I’m looking at the technique behind it and things that I needed to physically work on, but also mentally, as well,” she said. “(That night) I was like, that’s it, I’m just gonna go out there guns a blazing, when I should have been like ‘hey, I could be in for the long haul, maybe I should be a little more patient and play it out a bit.’ But I wanted to give the fans that exciting fight that I was notorious for, and dealing with someone as highly skilled as Ronda, who’s a fast starter, you’ve got to show that patience and endurance level.”

Now it’s time to, not start over, but begin the road back to a title shot. Davis knows a win over Kaufman, no matter how impressive, won’t get her back there, but it helps. More realistically, it will take a few significant victories for the Ontario native to be in position to demand another crack at the belt, and she knows not only that, but that in this division, there is no such thing as easing your way up the ladder after a loss. Facing Kaufman, who she has lost to twice previously, is a prime example.

“Fighting with a top opponent like Sarah, you’ve got your good sides and bad sides,” Davis said. “The win is going to put you back up there in people’s eyes, but it’s going to be a tough fight as well. It’s not something where you’re going to come off a loss and have an easy day.”

Of course, that’s what competitors like Davis and Kaufman sign up for, and if anyone saw their epic second bout in Strikeforce in 2012, neither will shy away from a rumble on fight night.

“It was a great fight and, to this day, people comment on that fight,” Davis said. “But also, I know this is something I have to be prepared to take for the long haul. You can’t sit there and say been there, done that. I have fought her and I know how tough she is and I know that there’s a good chance this fight could go the distance. She’s someone who I’m familiar with. I know her background, her history, even if you change a little bit and adapt to different fighters. I’ve changed in my fighting style since the last time that we fought, but it’s something that you have a familiarity with. So that’s nice, and the fact that I’m fighting back in Canada is great.”

Yet what may be the biggest difference in Davis’s first bout in Canada since her UFC debut against Rosi Sexton in 2013, is that she has faced the beast known as the spotlight, and from here on out, she feels like she can tame it enough to where it works for her and not against her.

“It’s almost two separate worlds,” Davis said of the lead-up to the Rousey fight. “I had to deal with a lot more press than I’m used to. The press conference alone, there were a lot of nerves when it came to that, but you’ve got to separate yourself from that when you get into the Octagon. And I didn’t really think that it affected me as much. Maybe in a sense that I wanted to please everybody and show everybody that I’m not just someone to be pushed to the wayside, that I’m going to be the next champion. So you’ve got to take a step back into the realization that this is huge fight and sometimes it’s better to play it safe than to be as entertaining.”

She laughs, and you wonder whether it’s because she’s put the Rousey fight in the past and moved on, or because she knows that it’s impossible for her to play it safe. Either way, in a sport where there are unbelievable highs and crippling lows, Alexis Davis has found her middle ground.

“I think I’m lucky enough that I have a lot of people that keep me grounded, no matter where I am or where I’m training at,” she said. “On a weekly basis, you’re going to have those losses and those hurts, and as long as you can come back and learn from it, I think that’s where you strive and become a better fighter.”