Alexis Davis: The Quiet One Prepares to Make Some Noise

"I don’t want a one-dimensional Ronda. I want the Ronda that we have now." - Alexis Davis 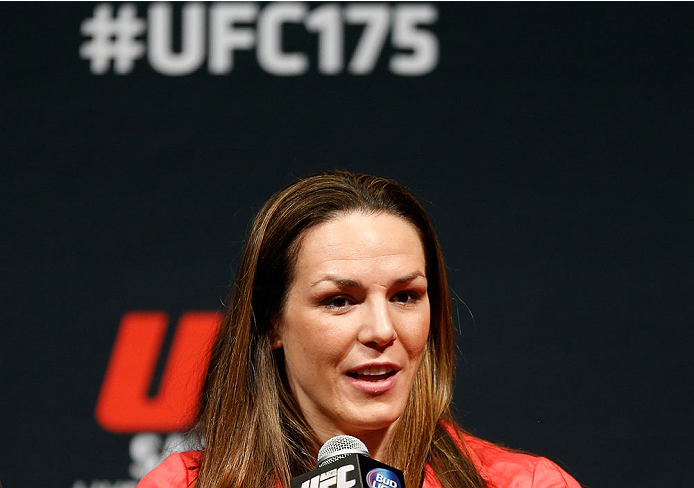 There is no getting around the fact that Alexis Davis is a prohibitive underdog in the eyes of oddsmakers heading into her UFC 175 co-main event against Ronda Rousey this Saturday in Las Vegas. There’s no shame in that, as practically everyone in the 135-pound weight class would be destined for the same fate, at least until the champion starts to show some signs of slowing down in the Octagon.

But when I think of the soft-spoken Canadian contender, all I see is her face after her three-round war with Sarah Kaufman in their 2012 Strikeforce rematch. Davis, was bloody, bruised, but unbowed. She lost a majority decision that night, but in a fight many consider to be the best female fight of all-time, she was no loser. Then I fast forward to this Saturday’s fight at the Mandalay Bay Events Center and simply say, this is no underdog.

Is Davis a favorite against “Rowdy” Ronda? No. Are the oddsmakers correct in their pre-fight assumptions? Based on Rousey’s dominance, of course. But there are intangibles in every fight, and Davis has plenty of them. And in the lead-up to the fight, you can see them every now and then.

The Niagara Falls native has kept a fairly low profile heading into Saturday night, a good thing considering that when it comes to promoting an event, Rousey has few peers. It also allows Davis to get a peek into her foe’s mindset. Is she focused, is she looking past the fight, does she respect her?

“It’s great to hear,” said Davis of the respect afforded her by Rousey in pre-fight interviews. “There was a lot of negativity that came off her previous fights with (Miesha) Tate, but then you look at Ronda and talk about her fights with Liz Carmouche and Sara McMann, and she has that other side of her where she’s a fighter and she respects the other fighters that are up and coming and next to face her. And you kind of have to. This is someone who poses a threat to you, and whether you like them or not, you have to respect the talents they have, just like I do for her. I’m not thinking in any way, shape, or form that Ronda’s not gonna go and look for a fast win. She’s gonna look for those power punches, that knockout win or that submission win, and she’s going to fight as hard as she can.”

So will Davis, and she has proven her point throughout the years by facing perhaps the highest level of competition of anyone in the bantamweight division. Just look at the names: Kaufman, Valerie Letourneau, Tara LaRosa, Shayna Baszler, Tonya Evinger, Julie Kedzie, Amanda Nunes and Hitomi Akano. And that’s before she made it to the UFC, where she has since defeated Rosi Sexton, Liz Carmouche, and Jessica Eye. That’s a sizeable experience edge for Davis, but where Rousey evens the score is with her ease in the spotlight, her experience in big events, and her ability to juggle a hundred different things at once and still show up on fight night. You would think that last part would catch up to someone eventually. Does Davis think it will be this weekend?

“You’ve always got to hope for something like that,” she laughs, “but she’s a great fighter. She puts a lot on her plate, but regardless of how much she does on the outside of fighting with movies and promotional things, she’s going to show up to the fight no matter what. She’s not be hemming and hawing and second guessing; she’s still up for a fight.”

So is Davis, who has tried to keep things low-key for the biggest training camp of her life.

“It comes and goes,” she said. “Everybody keeps asking ‘are you getting excited yet,’ or ‘how are you feeling,’ and I feel like it’s almost like any other camp. There’s obviously a lot of exciting stuff going on, but I’m just trying to stay focused on my training and keep level-headed.

“It is almost a normal camp except that there are a lot of different tools that I’ve had to add, especially with judo,” Davis adds. “You don’t find a lot of high-level judo players, so that’s obviously something I’ve had to go and change in my camp and work on. So it’s just adding that extra element in my game to change things around a bit and playing with my scheduling to try to wrestle with the guys at Alpha Male while keeping everything as normal as possible.”

You would think that at this point, adding new wrinkles to your game would be distracting and possibly harmful to your performance, as opposed to sticking with what got you here and trying to impose your will and your game plan on your opponent. Davis disagrees, knowing that in the most important fight of your life, you pull out all the stops, even if that means adding some judo to your game to match up with an Olympic Bronze medalist in the art.

“With judo, it’s not too bad because I have some experience in it, so tt’s not totally strange to me,” said Davis, a black belt in Brazilian and Japanese Jiu-Jitsu. “We studied a bit of judo when I was doing Japanese Jiu-Jitsu, so it’s not at all foreign. I’m familiar with a lot of throws and a lot of the movements. So now it’s just working more on the defensive side of things.”

Offensively, Davis will be showing up to fight. If she can make it aesthetically pleasing like she did in the second Kaufman fight or in her wins over Baszler and Akano, she will. If it has to be ugly, so be it, as the only objective is to win. As for her opponent, Davis doesn’t have a preference when it comes to facing the Rousey looking for armbars or the one looking for knockouts, as long as it’s the best one possible. And unlike many fighters, when Davis says this, she means it.

“I want to fight the best Ronda that there is,” she said. “She’s adding that extra element to her game where she’s surpassed being just a judo player or a takedown player. Now she’s adding more stand-up to her game, and I don’t want a one-dimensional Ronda. I want the Ronda that we have now.”

She’ll get it on Saturday night, and if blood must be shed and bruises taken for her to get the victory, Davis is willing to go there. She’s proven it. And if she does win, everything changes – for the UFC, for women’s MMA, and for MMA in general. This is fight capable of sending shockwaves, but the biggest change will be in the life of Alexis Davis. Is she ready for that?

“I’m the type of person who takes things as they come,” she said. “You can only prepare so much for it. I haven’t been in this situation yet, so you can think you know what’s coming, but it’s just like a fight; you never know.”