Alexis Davis: A Homecoming and a Debut

"I know that every single day I’m in the gym, it doesn’t matter if I have
a fight or if I don’t, I’m going to train and I know I got to where I
am today because of the hard work I put in." - Alexis Davis 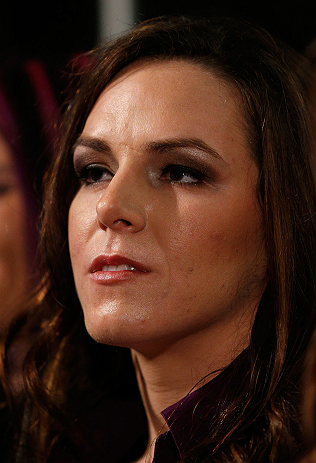 While the idea of the greatest this or best that is overblown and overused these days, you won’t find too many dissenters if you called the 2012 Strikeforce bout between Alexis Davis and Sarah Kaufman the greatest female fight in mixed martial arts history.

No, it didn’t receive the most attention, and it wasn’t even on the main card that night, but those who witnessed the back-and-forth scrap, won by Kaufman via majority decision, won’t ever forget it. As for Davis’ memories?

“I know I got hit in the head an awful lot, I remember that,” laughs the 28-year-old from Port Colborne, Ontario, Canada. “But I thought to myself ‘this is a great fight; how could people not be entertained?’ I was kind of bummed out that we were on the prelims, but I got such amazing support from so many fans after that fight, and I had people tweeting me, saying, ‘I never was a fan of MMA or women’s MMA, but after watching that fight, I am. Even after coming off of a loss that’s my morale booster.’”

It was perfect timing for Davis – not the loss, but the fact that she received so many accolades and such support after the fight, which came as she split with her longtime camp and prepped for a move to San Jose, California, where she trains today with coaches and training partners everywhere in the area from Dublin to Concord.

“It was kind of hard at first, even now, but I’m a little bit more used to it,” she said. “I was used to the same trainer all the time, but it’s totally changed, maybe not so much my fight style, but I’ve really improved out here. It’s good to meet a lot of different people, and I think I get more of a variety where I am out here. Where I used to do all my training in one facility, now I train at three different ones, so I get different bodies and it’s all added to my game.”

At this point, you would assume that Ms. Davis has a fight coming up, and that assumption would be correct. But it’s not just any fight, as she will return home to Canada this Saturday to make her UFC debut against Rosi Sexton on the UFC 161 main card in Winnipeg. UFC debut, main card, fighting at home; that’s a lot to take in for one fight. What does she think the emotions will be like on fight night?

“They are obviously going to be very high,” she said. “This is the first time since I fought in Buffalo, New York that I am going to have my family come out to watch the fights, so there’s a little bit of added on pressure there too, but I know I’ve been doing this long enough that once you hit the cage it’s another world. Everything else kind of disappears and it’s just you and your opponent.”

Davis does admit that everything really hasn’t sunk in completely yet though.

“Even still now I don’t quite believe it,” she said of signing with the UFC. “I know it but I don’t think it’s really going to hit me until I’m there. It kind of goes through stages. They call you and they say ‘yeah we’re gonna do it,’ and I’m really excited. Then I’m like, maybe they’ll change their mind or something. (Laughs) But then when I got the new contract I said ‘look, I finally made it, now it’s on paper.’ But once I hit that Octagon it’s a different story.”

She should be just fine. A veteran of over six years in the fight game, Davis’ 13-5 record includes bouts against elite competition like Kaufman (twice), Amanda Nunes, Julie Kedzie, Tara La Rosa, and Tonya Evinger (twice), and the black belt in Brazilian and Japanese Jiu-Jitsu stamped her ticket to the UFC with back-to-back submission wins over Shayna Baszler and Hitomi Akano following the rematch loss to Kaufman. In short, she paid her dues to get here, making this opportunity even sweeter.

“I pretty much had to work hard for everything I’ve ever had to do in my life,” she said. “It is a little bit more satisfying, at least for me. I know that every single day I’m in the gym, it doesn’t matter if I have a fight or if I don’t, I’m going to train and I know I got to where I am today because of the hard work I put in.”

On Saturday, she faces someone else who took the long road here in British pioneer Sexton, who is coming up from the flyweight division to make her run at 135 pounds in the UFC.

“She’s a strong opponent,” said Davis of Sexton. “Something I’m going to have to watch is that I make sure I keep my pace and not her pace. She’s good at pushing the pace and she’s obviously got a lot of endurance, but I think I’m going to be the stronger one. I’m not sure how much weight she could put on in that amount of time and I’ve also got to feel positive that I’m going to have a reach and height advantage.”

Yet even with the odds in her favor, Davis’ aggressive style is always the wild card, possibly turning a decisive win into a back-and-forth scrap where the outcome is always in doubt. Either way, after Saturday night, odds are that you will be welcoming Alexis Davis into the UFC’s bantamweight division with open arms. And she’s more than happy to be a part of that already stalwart group.

“I think it’s very obvious that the UFC has some of the best ladies in the world and I honestly am very pleased with the way it’s played out so far,” said Davis. “They could honestly say the best in the sport have been able to come over to the UFC, whether they had to go up or down a weight class, and I can say I was kind of scared about how much play the women would get. But the UFC has really shown their support and their backing behind the women, and it’s great that they are building a division, not building a single athlete.”