"Obviously I’m looking for that title shot, but I feel like every time
they make me wait, it just makes me a better fighter, and it makes it
worse off for whoever has the belt at the time." - Alexis Davis 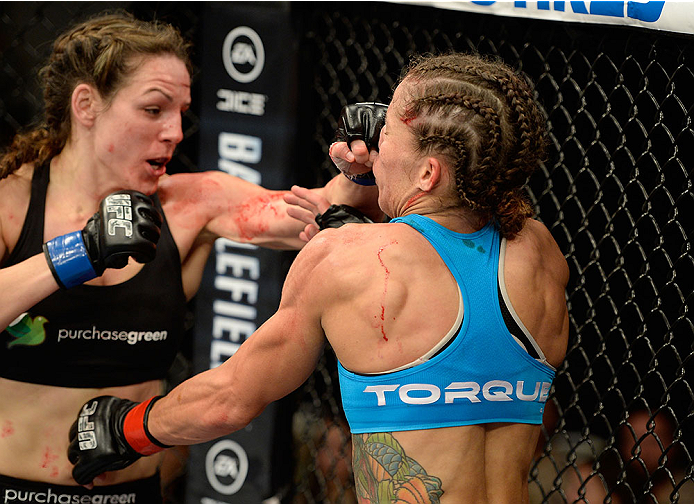 Alexis Davis doesn’t ask for much. It’s not her style. But when you ask her if the ideal scenario for her UFC 170 meeting with Jessica Eye in Las Vegas this Saturday is a replay of her epic March 2012 rematch with Sarah Kaufman but with a different outcome, she thinks that would be just fine.

“Oh yeah, that would be nice,” she smiles, and it would be, not just for her, but for fans who would love to see a 15 minute war like the one Davis and Kaufman engaged in back in Strikeforce. Not just one of the best women’s fights you’ll ever see, but one of the best fights regardless of gender, it was the kind of performance that stamped the Ontario native as someone you would always tune in to see fight, even though she lost a majority decision that night in Columbus.

That could have been a signal for Davis to take the foot off the gas in training, content that if she showed up and brawled, all would be well. Instead, she focused on sewing up the holes in her game and getting better. Being exciting wasn’t enough; she wanted to be the best, and if that meant relocating to San Jose, California, so be it.

“I made a huge jump, I was able to have different eyes on my training, and was able to adapt and change with phenomenal coaches,” she said. “And even having the availability of more training partners, I feel that with every fight I keep improving and pushing myself. And obviously I’m looking for that title shot, but I feel like every time they make me wait, it just makes me a better fighter, and it makes it worse off for whoever has the belt at the time.”

Those are fighting words, but in a nice way, and that’s a hallmark of Davis’ personality. She isn’t a trash talker, but when the bell rings, no one is more competitive and intent on winning. In other words, she’s the perfect role model for not just aspiring female mixed martial artists, but for any youngster. And that’s a responsibility she’s always taken seriously.

“Even before I moved out to California, I was running an academy back in our hometown so we kind of had that responsibility as well,” she said. “Not quite to this level, where you have a million more viewers now, but there’s a way I want to portray myself, not just in the Octagon, but through social media and everything else. I have three stepkids and I want them to look up to me as well and not be like ‘I don’t know her.’ (Laughs) And I want my nieces to be proud of me and I want that next generation to be like ‘I want to be like her.’”

It’s an admirable goal, and if the 29-year-old Davis gets her wish to become a world champion, she’ll have an even bigger platform, and she’s certainly getting close to that point. Winner of seven of her last eight bouts, and four straight since the loss to Kaufman, Davis is on the short list of contenders for the women’s bantamweight title Ronda Rousey defends against Sara McMann in the UFC 170 main event. In fact, with a win over Eye, it would be nearly impossible to deny her a shot at Saturday’s winner, though she’s not ready to speculate about that possibility.

“For me it doesn’t enter my mind because they were saying that with my last fight with Liz (Carmouche),” said Davis. “People said ‘The winner of this could be fighting for the title,’ and obviously that hasn’t happened. I also know with (fellow contender) Cat (Zingano), she’s going through a lot of emotional and physical things, so I don’t know how that’s going to play out as well. So I try to train for every fight just the same, and I’m gonna put myself all out there and fight like it’s my title fight because if you come out with a victory, but a slow victory, something that doesn’t get the fans on their feet, it doesn’t quite put you in the limelight.”

Davis knows that while her two UFC wins over Rosi Sexton and Liz Carmouche were dominant in nature, they also weren’t Kaufman-esque. Yeah, you can’t have too many of those without paying for them later, but she expects that in Eye, she’ll have a dance partner that will help her put on the show she wants to.

“I feel like we’re pretty much the main event for our part of the card and we’re really what’s going to sell the Pay-Per-View,” said Davis, whose bout with Eye is the final one of the FOX Sports 1 prelim section of the card. It’s also one that was seen to be in jeopardy briefly after Eye saw her UFC 166 win over Kaufman last October turned into a no contest following a positive post-fight test for cannabinoids.

“There were a few days when I was on edge, wondering whether I was going to get a new opponent or not,” said Davis. “It kind of plays with you a bit because you’ve been preparing for a month and a half, getting a game plan, studying your opponent, pretty much picking them apart, and then two weeks out, things might get changed up and you could have somebody that’s totally different. She’s known for her boxing and her stand-up and you could end up with a grappler or wrestler. But everything smoothed out and it all worked out.”

And Davis is ready for the best version of Eye, one that can fight everywhere, even though stand-up is her calling card.

“She (Eye) has good boxing, has a good game, and she’s a dynamic fighter – she gets in, she gets her points, and she gets out,” said Davis. “She’s not one who’s going to get into something like the Kaufman fight with me, that’s going to stand there and brawl. She’s going to get her points and pick her moments when she’s going to attack. And she’s no slouch in her jiu-jitsu game as well. That’s a mistake that a lot of her opponents make. She has some good submission wins, and while I’m very happy with the way my jiu-jitsu game is and I train with great athletes, great black belts, and world champions, you can’t underestimate your opponent at all.”

Especially not when you’re this close to fighting for championship gold. And Alexis Davis is determined that this is the year that she gets her hands on the bantamweight champion.