Alexandre Pantoja Knows What He Needs To Do To Earn A Title Shot And Plans To Show That At UFC Fight Night: Cannonier vs Gastelum
By E. Spencer Kyte, on Twitter @spencerkyte • Aug. 17, 2021

When you speak to Alexandre Pantoja about competing in the UFC, the conversation is akin to listening to an ebullient child raving about all the gifts they received on Christmas morning or sharing their thoughts on their favorite types of candies.

Strange as this may sound, you can hear him smiling through the telephone and you know that his eyes are wide and bright, filled with life, because more than just about anything, the 31-year-old Brazilian truly loves fighting on the biggest stage in the sport and facing the best fighters this sport has to offer.

“Fighting with the best guys is absolutely a gift of the gods,” said Pantoja, who returns to action on Saturday evening in a clash with fellow flyweight hopeful Brandon Royval. “You have an opportunity to prove you’re the best fighter in the world.

“I want to fight with the best guys, and I have that opportunity with the UFC,” continued the third-ranked flyweight. “I fought with Askar Askarov — he’s an absolutely great wrestler and he’ll come up big to fight for the title. I made a good fight with Deiveson Figueiredo, who is a brilliant fighter too.

“I made a good fight with Brandon Moreno — good shows — and that, for me, is absolutely special. It’s so amazing. It’s so good.”

Pantoja has actually shared the cage with the current flyweight champion on two different occasions, both of which were critical junctures in the Mexican standout’s twisting path to the top of the division.

The first time they faced off was when both were contestants on Season 24 of The Ultimate Fighter, which featured champions from various regional promotions seeded and matched up in a 16-person tournament, where the victor would earn a chance to fight Demetrious Johnson for the UFC flyweight title. 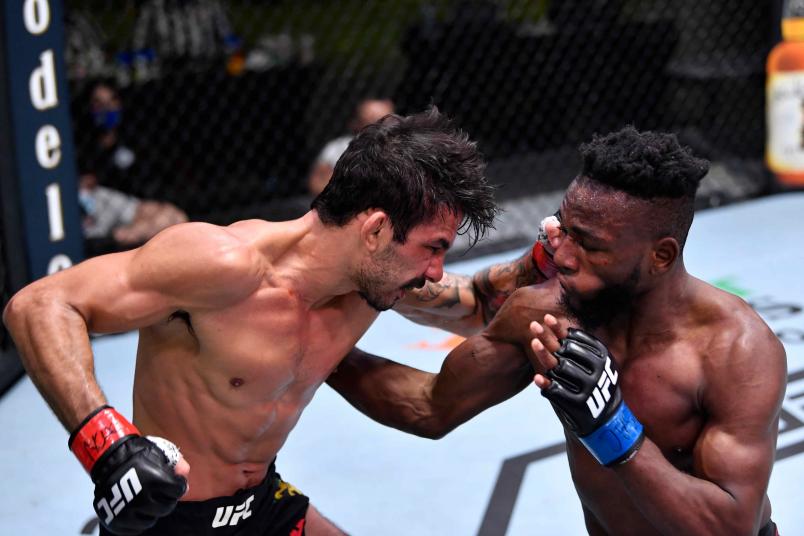 Alexandre Pantoja of Brazil and Manel Kape of Angola trade punches in their flyweight fight during the UFC Fight Night event at UFC APEX on February 06, 2021 in Las Vegas, Nevada. (Photo by Chris Unger/Zuffa LLC)

Alexandre Pantoja of Brazil and Manel Kape of Angola trade punches in their flyweight fight during the UFC Fight Night event at UFC APEX on February 06, 2021 in Las Vegas, Nevada. (Photo by Chris Unger/Zuffa LLC)

Pantoja was the reigning RFA flyweight champion at the time, sporting a 16-2 record and having won nine straight fights entering the house, capped by a second-round submission win over former WEC and UFC competitor Damacio Page. He entered the competition as the top seed and one of the obvious choices to win the whole thing.

Moreno was 22 years old, and despite entering on an eight-fight winning streak, “The Assassin Baby” was the lowest seed in the tournament, his age and the level of competition he’d faced to that point establishing him as an interesting prospect, but one in need of more seasoning.

Pantoja would win the fight by submission in the second round, but he recalls the competitive nature of the fight making others in the house question his standing as the top seed.

“Brandon is a special guy, bro,” he said of the flyweight champion, whom he developed a relationship with during the competition. “I was the No. 1 in the house and he was No. 16. The first fight of the show was me and Brandon. A lot of guys looked to me and said, ‘This is the No. 1 for the season and he had a close fight with No. 16?’ People thought maybe me and Moreno were not so good, but you see what Moreno is doing.

“He learned so fast with this loss,” continued the Brazilian, praising Moreno’s ability to hit the ground running and find success inside the Octagon when he first arrived in the UFC.  He also sees the adjustments and improvements Moreno continues to make, from their second meeting in Chile, which proved to be the champion’s last in the UFC for a minute, and since his return.

“Now he’s back to the UFC and the champ,” he said excitedly. “I think I’ve helped this guy. He’s such a different fighter now. When he fought against Deiveson Figueiredo, the second fight, people asked me, ‘Do you think Moreno can win?’ and I thought, ‘Absolutely not,’ but he learns so fast.

“He learned from losing to Deiveson how to make some changes to get the win.” 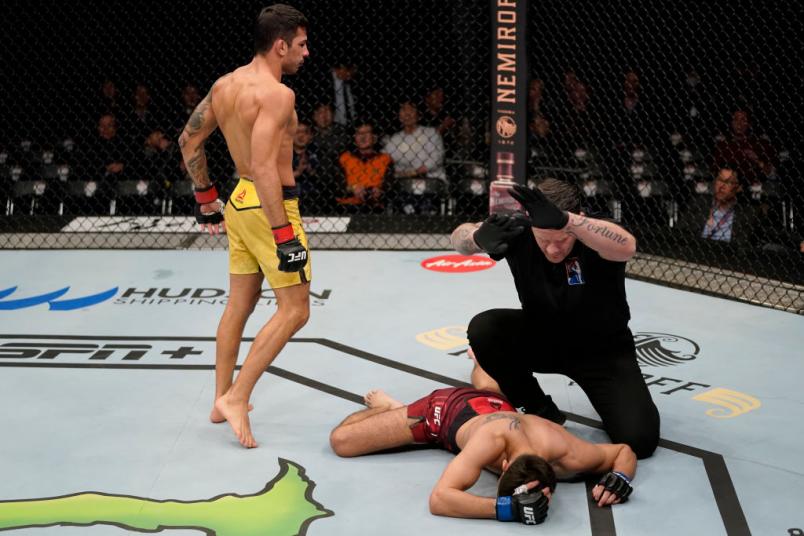 Alexandre Pantoja of Brazil celebrates after knocking out Matt Schnell in their flyweight fight during the UFC Fight Night event at Sajik Arena 3 on December 21, 2019 in Busan, South Korea. (Photo by Jeff Bottari/Zuffa LLC)

It’s not the kind of conversation you would normally have with a fighter just a few days out from their return to the cage, or at any point during their active career really, as most are laser-focused on climbing the ladder and speaking almost exclusively about their own skills and future ascent to the top of their respective divisions.

But Pantoja is truly unique in that regard — as excited about the division as a whole as he is his place in it; borderline giddy that he gets to compete against such an impressive collection of competitors, while still pushing to work his way to the top of the heap at the same time.

“I see so many good names in the division, so many people that have proven themselves in the UFC,” began the Brazilian standout. “I love my division because you have so many good fighters at the same level, the same skills. I appreciate all these guys.

“I’ve been a fighter for 14 years and I’ve learned a lot. I’m old school, but the new generation, and at this point in my life, I’m so ready. I have a long history and I think this is my best moment now.

“They gave me the name Brandon Royval and I thought, ‘This is a nice fight!’” he added, the excitement in his voice escalating as he talked about his impending matchup with the Factory X Muay Thai representative. “This guy is good, he’s coming to fight; he looks like me some years ago.” 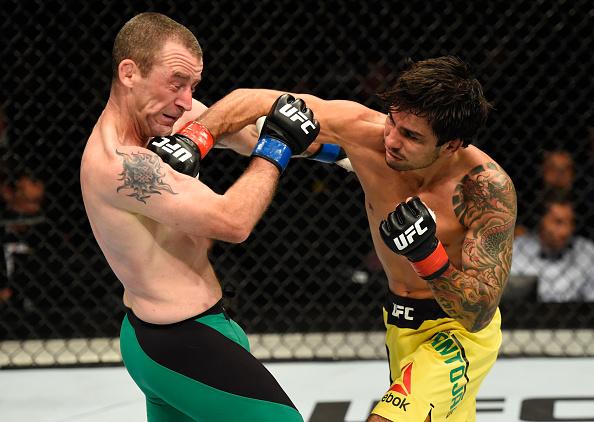 Like Pantoja, the 29-year-old Royval is just outside the top tier of contenders, currently stationed at No. 6 in the rankings and entering off a loss to the current champion. But in his first two UFC appearances last year, the former LFA standout earned second-round stoppage wins over divisional stalwarts Tim Elliott and Kai Kara-France, quickly establishing himself in the process as not only an all-action fighter that is always worth the price of admission, but also as someone with true championship potential in the 125-pound ranks.

It’s that combination of things that excites Pantoja about the matchup, and while things at the very top of the division are still unsettled, the Brazilian believes a victory here will show that he is finally deserving of a championship opportunity.

“He’s coming to fight, like me,” he said of Royval. “He’s going to make a big show, come to finish the fight.

“I made some mistakes before with Askarov — I was thinking about the title, about how close it was — and I didn’t deserve to be in that position. I want to deserve my opportunity and this fight is going to give me that opportunity.