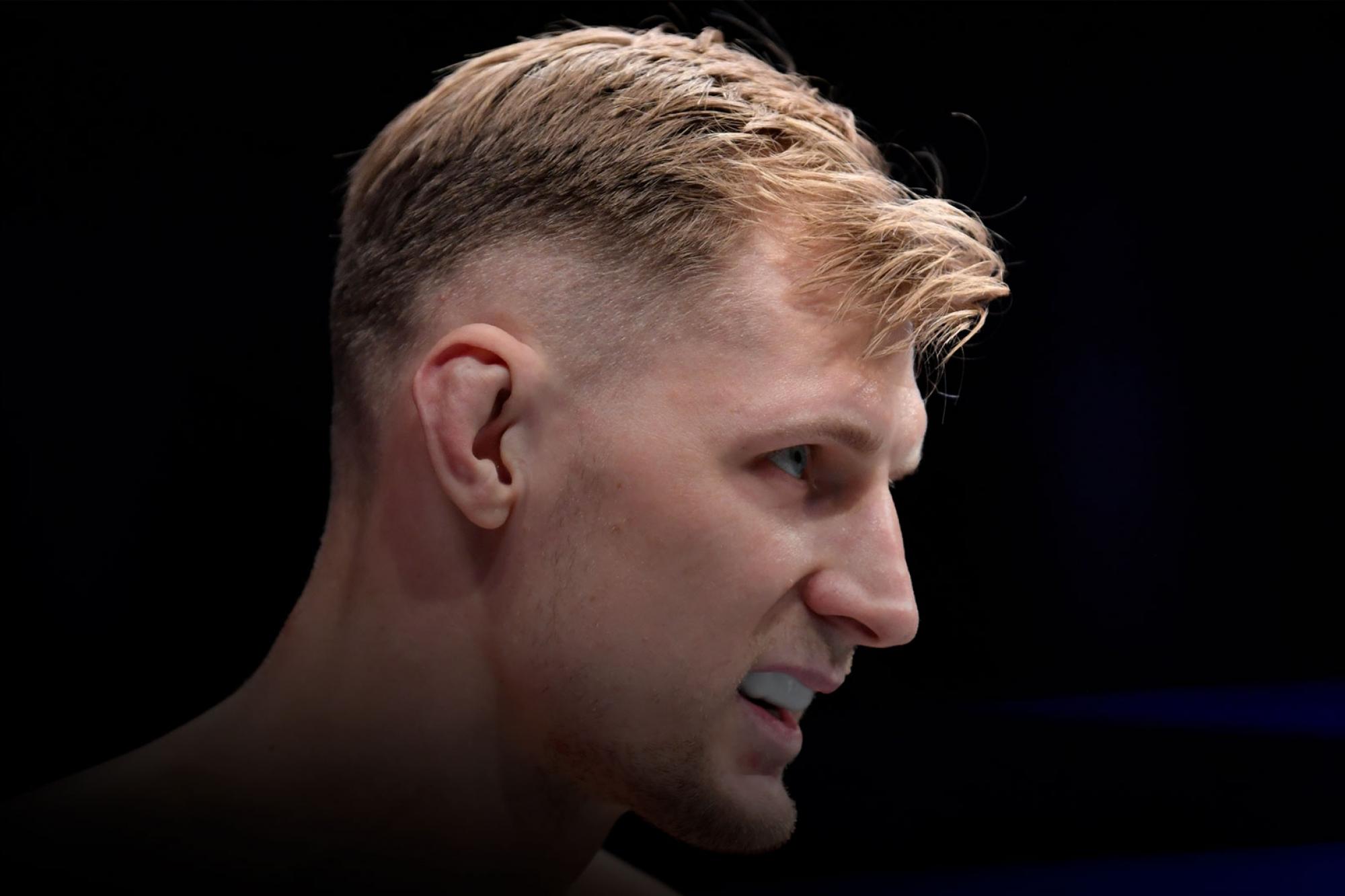 The similarities between Alexander Volkov and what his nickname personifies are eerily similar ahead of his main event clash with Curtis Blaydes at Saturday's Fight Night
By E. Spencer Kyte, on Twitter @SpencerKyte • Jun. 18, 2020

Alexander Volkov’s nickname is cribbed from one of the most iconic figures in cinematic history: Russian boxer Ivan Drago, the antagonist in the 1985 classic Rocky IV.

In the film, Drago is portrayed as an emotionless super-athlete; a towering, blonde-haired powerhouse focused exclusively on victory and unconcerned about anything other than completing the task at hand.

Though far from the icy fictional character that his nickname is derived from, the similarities between Rocky Balboa’s greatest adversary and the UFC heavyweight division’s “Drago” extend beyond the fact that the tale of the tape between Volkov and his cinematic counterpart is virtually identical.

As he readies to return to action this weekend in a crucial main event matchup with Curtis Blaydes in Las Vegas, the 31-year-old heavyweight contender is laser-focused, concerned exclusively with toppling the surging American favorite and nothing else, just like his namesake.

MORE UFC VEGAS 3: Significant Stats | Fight by Fight Preview | Fighters On The Rise | Burgos To Turn Around His 2020

“He is my next opponent, that’s all,” Volkov said when asked his reaction to facing off with Blaydes, who sits at No. 3 in the heavyweight rankings and carries a three-fight winning streak into Saturday night’s main event.

“I don’t think about the ranking,” continued the towering standout, who enters this weekend’s contest positioned at No. 7 in the heavyweight hierarchy and has amassed a 6-1 record inside the Octagon. “You’re either a champion or you’re not; the rest is just numbers and statistics. In any case, it’s not that easy to become one among the Top 10 heavyweights in the world.”

Lots of fighters say they don’t pay attention to the rankings or worry themselves with outside opinions, but the collection of competitors who truly hold themselves to those standards is far smaller, though Volkov is very much a part of that group and it’s evident in the way he looks at his career, his place in the division, and everything going on around him in the heavyweight ranks at the moment.

The lone blemish on Volkov’s UFC resume came in the waning minutes of a fight he was winning handily against Derrick Lewis at UFC 229.

For 14 and a half minutes, he dictated the terms of engagement and kept the feared knockout artist at bay, picking him apart from range and avoiding the full force of Lewis’ occasional rushes and heavy right hands. Then, as the final 20 seconds began to tick off the clock, bringing Volkov closer and closer to a victory that could have wrapped up a shot at championship gold, disaster struck in the form of a thunderous fight-changing right hand from Lewis.

Rather than lament what was lost and thirst for a rematch, the 38-fight veteran views the setback as an overall positive, just as he does with the rest of the scattered blemishes that fleck his impressive resume.

“I wish there were less losses, but most of them happened at the beginning of my career due to lack of experience,” said Volkov, who went 9-3 over his first dozen fights and is 22-4 since. “However, those mistakes helped me to become a better fighter.

“That fight, strange as it may sound, had more positive rather than entirely negative effect,” he continued in reference to the bout with Lewis, which launched “The Black Beast” into a championship clash with Daniel Cormier one month later at UFC 230. “I did my best to realize my strategy, and the loss itself gave me a motivation for further development, for self-improvement, so, I have no problem with that.”

It’s much the same when it comes to the reality of life in the heavyweight division at the moment.

“I don’t think too much on the situation,” said Volkov when asked about the congestion at the top of the division, choosing instead to remain focused on the things he can control and doing what he can in order to improve his place in the pecking order. “Everything is going as it should. I work a lot and test myself in bouts. Discipline is the main factor for success that we focus on in our work.”

And it’s that discipline, that focus that he sees carrying him to victory on Saturday night when he steps into the Octagon with Blaydes.

The 29-year-old American is one of the more dynamic talents in the heavyweight ranks — a former junior college National champion wrestler who has added sharp, powerful striking to his repertoire over the last several years, as exhibited by his second-round stoppage win over former champ Junior Dos Santos last time out.

Through the first 16 fights of his career, the Elevation Fight Team member has only been beaten by one man, Francis Ngannou, who bested Blaydes in his promotional debut five years ago and again in the winter of 2018.

Despite his uninterrupted success against anyone not sporting the last name Ngannou, Volkov believes he’s put in the work needed to dispatch the streaking heavyweight standout this weekend in Las Vegas.

“I’ve already done the required preparatory work,” he said. “I watched his wrestling and analyzed his fighting strengths and trained a lot to forcefully oppose (his offensive advances). Now I just have to put in a strong performance.

“I am going to fight in the Octagon and defeat my opponent,” he added when asked how he sees the fight playing out. “I feel up to showing a strong performance for all five rounds; the question is how long can he withstand?”

It’s not quite “I must break you,” but the stakes and the skills Volkov and Blaydes bring with them to the cage on Saturday night at the UFC Apex should be more than enough to get you interested in this real life heavyweight clash between an American standout and a dangerous Russian nicknamed “Drago.”