For all the noise about Alexander Volkanovski’s trilogy fight with Max Holloway, the Australian can’t help but root the powers of his self-conviction in the head that rests upon his shoulders.

“Bald f**kin’ Volk is so much better (laughs),” Volkanovski told UFC.com. “(Holloway) hasn’t fought Bald Volk yet, so he’s going to be in for a good surprise.”

Jokes about hairdos aside, Volkanovski has certainly erased any doubts about his championship quality in his last two fights against Brian Ortega and Chan Sung Jung.

Sporting a freshly shaven head for the first time, Volkanovski pulled off his great escape against Oretga after getting caught in the jiu jitsu ace’s guillotine and triangle chokes. Against The Korean Zombie, Volkanovski put on a performance that Joe Rogan fittingly touted a “seminar” on the broadcast.

On both occasions, “The Great” backed up every utterance that he is on a different level than any other 145er on the planet.

“It’s just where I’m at right now in confidence and everything,” he said. “I feel real good. Preparation is always going well. We always put in the effort. That’s just how we do it, and now I’m keen, excited and can’t wait to go out there. This is still a new challenge. Even though I’ve seen it twice, I still think, in my head, that he’s gotten better. He’s going to throw something different. It’s still going to be a chess match."

The shift in Volkanovski’s attitude isn’t as dramatic as a heel turn or some adoption of a character in the media, but rather just an aura of untouchability.

Free of having to face “Blessed,” Volkanovski expressed himself well as the featherweight king in his second and third title defenses. Although he can’t properly articulate what that unlocked for him mentally, Volkanovski does know it’s something that has always been inside of him and is now there for the world to see and experience.

“I just didn’t understand any of it,” he said. “That’s what it was. Now, I understand it. I appreciate it. Just being comfortable and confident in who I am, what I’m about and everything else. I’ve always had that ticker even when I was playing in rugby league. I’ve always had something that people didn’t have.

"Whether it was a fire in the belly or that never give up attitude or that type of stuff, I’ve always had that. I just didn’t have the knowledge I have now, so I think that’s mainly what it is, that knowledge. It’s hard to explain because it’s not just knowledge. It’s a feeling and all that, but it helped me understand it and appreciate it and let it all out and let it go. It’s pretty hard to explain.”

That bulletproof mentality is what shined through when he nearly got submitted against Ortega, and the championship mentality once again found its way to the surface as he put the finishing touches on Jung to start the fourth round of their fight.

As most expected after he beat Holloway a second time in a razor-close, much disputed decision, all roads pointed back toward a third fight despite Volkanovski’s 2-0 advantage over the Hawaiian. 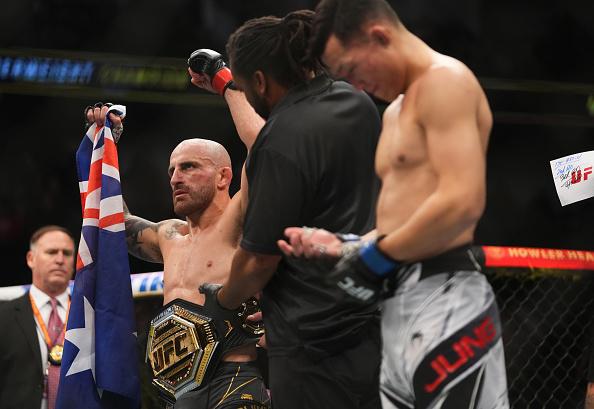 Alexander Volkanovski of Australia celebrates after his victory over 'The Korean Zombie' Chan Sung Jung of South Korea in their UFC featherweight championship fight during the UFC 273 event at VyStar Veterans Memorial Arena on April 09, 2022 in Jacksonville, Florida. (Photo by Cooper Neill/Zuffa LLC)

Although the circumstances are a bit unorthodox coming into a trilogy bout, Volkanovski touts Holloway’s “stubbornness” in keeping his No. 1 contender slot with wins over Calvin Kattar and Yair Rodriguez. He also acknowledged the fact that, as it stands right now, the two are head and shoulders above the rest of the division and push each other to a higher level of competition.

“A lot of times, I’m playing chess, I’m moving all these pawns, and I’ve got all this strategy, where the person on the other side isn’t really playing chess. With Max, he’s using his pawns,” Volkanovski said. “We are figuring each other out. We are changing strategies. We are doing all that type of stuff. I haven’t really had that in-depth with someone. I haven’t had a proper chess match. I’m always playing chess, so that’s how I go forward, but it’s up to my opponent to play chess with me.

“This time, there’s strategy involved. There has to be with someone like Max and his team, so I give them full respect.”

Volkanovski’s team, headed by Freestyle MMA’s Joe Lopez and aided by City Kickboxing’s Eugene Bareman, are heralded as two of the best minds in the sport. In tandem with Volkanovski’s all-around excellence and high Fight IQ, the champion has an intricately dangerous formula for Holloway to consider.

When the bell rings for their third bout, it’ll mark the start of the 11th round of competition between the two. With all that information in tow, Volkanovski can’t help but relish the idea of ending things early this time around, especially if he can do it in a way nobody else has done before.

“He’s known for this granite chin,” Volkanovski said. “It’s almost a legendary chin. You don’t really want to be known for that. That’s how I feel, but that’s still something if I can take him out and finish him, knock him out and something like that, that is a real statement. No one has done that before, even in heavier divisions. It’s pretty incredible. I have touched on the fact that he does take some damage, he can because of that granite chin, but how long does that chin hold up? I plan on landing on that chin a lot, so I want that finish, but if it stays legendary, all right. I’ll just tag it for five rounds.”

Although racking up his 13th professional knockout is tantalizing, Volkanovski won’t mind snatching his fourth career submission win either.

Overall, the fight is dripping with intrigue for fans and fighters alike, and Volkanovski isn’t ignorant of the stakes at hand for his career as a competitor, but also as a person with a family to support. A third win over the man many were throwing into featherweight G.O.A.T. conversations only bolsters Volkanovski’s own resume, that also features wins over José Aldo and Chad Mendes. 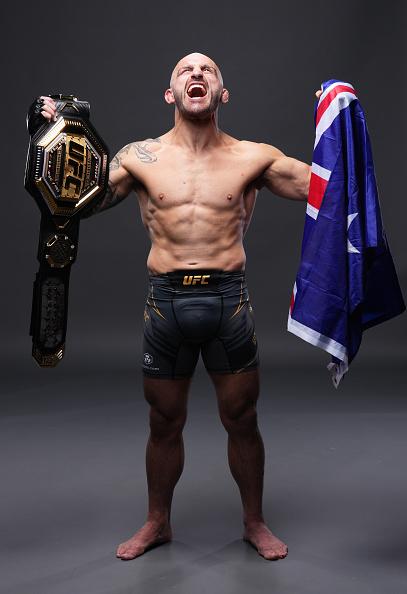 Alexander Volkanovski of Australia poses for a portrait after his victory during the UFC 273 event at VyStar Veterans Memorial Arena on April 09, 2022 in Jacksonville, Florida. (Photo by Mike Roach/Zuffa LLC)

On top of that, he is proud to co-headline International Fight Week’s pay-per-view with fellow ANZAC Israel Adesanya and represent the Oceania region on the highest platform yet.

“This is history being made,” Volkanovski said. “I believe we got a lot of potential on our side of the world, and it will probably happen again, but we’re the first to do it. It's pretty incredible to have two champions not only from the same area but headlining a card together. It means a lot, and it just adds to the fire for us to really put on a show.”

It’s difficult to think about the last time two of the top pound-for-pound fighters were going at it for a third time, which makes this occasion all the more special. The years following their rematch only added fuel, intrigue and anticipation, and on July 2, Volkanovski expects to answer all questions and put a stamp on this chapter of his exponentially-growing legacy.

“It was already obviously two of the best mixed martial artists going at it,” he said. “Now, we’ve both leveled up and dominated other guys, and now he’s getting another chance. It just adds to the story, as well. It makes this fight even bigger. I definitely think he has improved, but I think I’ve improved more. It’s hard to say someone has improved when I’m not in front of him, whether I put a fire in the belly or something like that, or maybe it was motivation, but that’s still dangerous.

“We’ll see Saturday night how much he has improved, and we’ll see how much I improved.”