The 33-year-old Australian is 10-0 inside the Octagon and just celebrated his two-year anniversary as the ruler of the 145-pounders. He holds wins over Chad Mendes, Jose Aldo, Max Holloway (twice), and Brian Ortega, has won 20 consecutive fights overall, and is one of the most complete and technical fighters on the roster today.

It’s the recipe for inclusion in the all-time great conversation at featherweight, and a testament to a blue-collar work ethic in and out of the Octagon that was on display in his September win over Brian Ortega.

That bout feels like one of those contests that is only going to get better with age, the more we reflect on how dominant the champion was for the majority of the fight and how incredibly he extricated himself from two of the challenger’s signature chokes.

Ortega clamped onto a mounted guillotine with just over two minutes remaining in the third round, locking it in tight. If you put 100 people into the same position at the same point of the fight, maybe 10 are getting free. Just over a minute later, Ortega locked up a triangle choke, hooking the leg and rolling into a more dangerous position, but once more Volkanovski worked free.

And he still won the round on all three scorecards; that’s how much punishment he unloaded on Ortega, who remained on the floor, spent, for 15 seconds after the horn sounded to signal the end of the round.

For the fight, Volkanovski out-landed Ortega 214-88 in terms of significant strikes, landing at a 60-percent clip over the course of the 25-minute affair. He threw 99 significant strikes in the all-action third round alone, and stung the gutsy challenger with swift counters, stiff jabs, and clean rights and lefts all night long.

And though Volkanovski hasn’t yet received the acclaim some of his peers at the top of the sport have, he relishes his position, telling me prior to his victory at UFC 265 that he welcomes the doubters and the chance to prove people wrong. Add in a refreshing attitude, and by this time next year, “Alexander the Great” may be seen as the best to ever do it at 145 pounds. 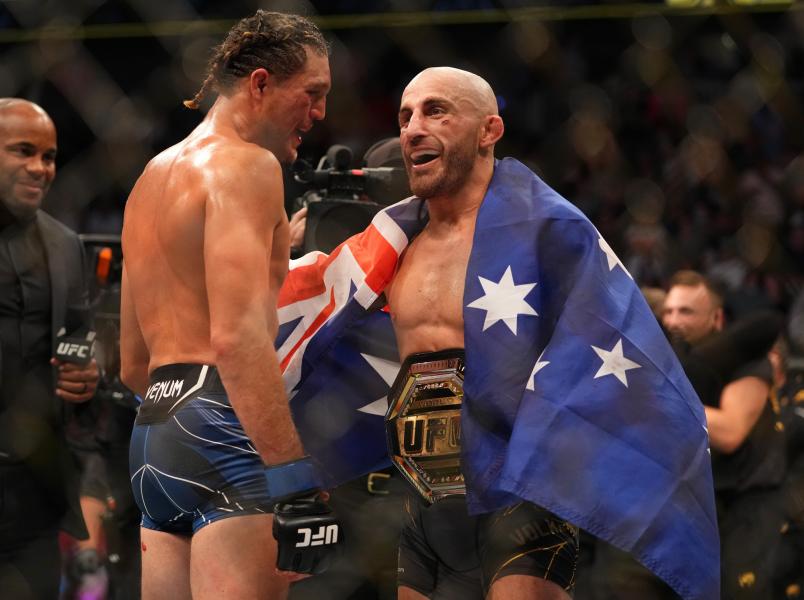 Brian Ortega and Alexander Volkanovski of Australia talk to each other following their bout during the UFC 266 event on September 25 2021 in Las Vegas Nevada. (Photo by Cooper Neill/Zuffa LLC)

“I’m the champion chasing these contenders, and that’s why you see me keeping a close eye (on the division),” he said. “These guys are coming up — we’ve got a stacked division, and they all want that belt. They ain’t getting’ it, but they all want it, and I’ve got my eye on all of them.”

Before facing a new foe, he’ll most likely begin his 2022 campaign facing a familiar one, as a third bout with Holloway feels like a foregone conclusion at this point after “Blessed” earned impressive wins over Calvin Kattar and Yair Rodriguez to re-affirm his standing as the top contender in the featherweight division.

Given how he arrived at being the underrated standout of this current crop of champions, a trilogy bout with Holloway might be just what the doctor ordered for Volkanovski, because if he beats the popular Hawaiian for a third time and can wrap up his three-game sweep with a finish, there will only be one thing left to say — the thing many have been saying for a couple years now:

Alexander Volkanovski is a truly world-class fighter and an absolute machine inside the Octagon.