Alexander Volkanovski: Beating Makhachev Could Make Me One Of The Best Ever

Instead, the UFC featherweight champion wants to leave no doubt that his position on that list is accurate. That’s why he asked to fight newly crowned lightweight champion Islam Makhachev, whose victory over Charles Oliveira at UFC 280 slotted him at number two on the list of the best fighters in the game.

Fighting up a weight class and against a fighter as dominant as Makhachev is just the type of challenge that fuels the 145-pound king, so the UFC granted Volkanovski his request, officially scheduling the two fighters to headline UFC 284 in Perth, Australia, on February 11 (February 12 local time).

To say that Volkanovski is excited would be an understatement. He’s convinced that UFC 284 will be the moment that defines him as one of the greatest of all-time. 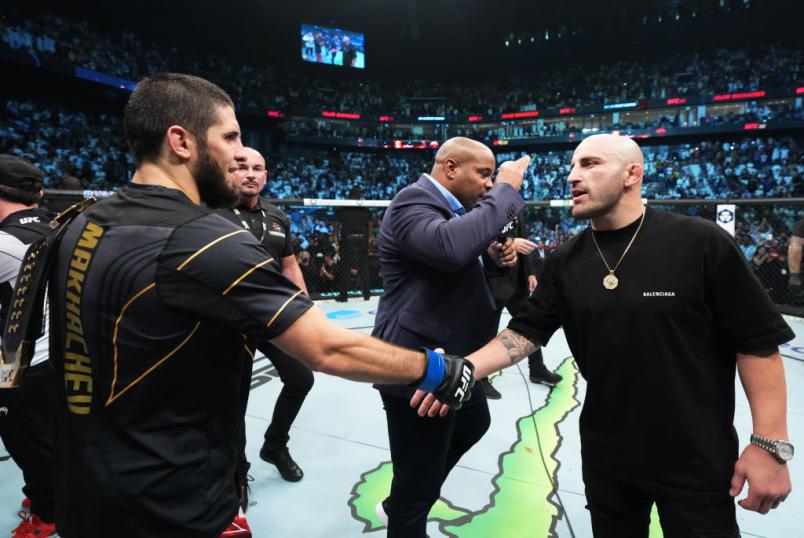 “One hundred percent, I don’t think it gets any bigger than this,” Volkanovski told UFC.com. “Put everything into perspective: the second belt, the challenge, the No. 1 pound-for-pound spot, and in Australia. It doesn’t get any bigger than that. It’s going to be absolutely huge.

Of course, there are going to be those that say Volkanovski is too small or that Makhachev is too strong or powerful. Doubters are expected when you want to do achieve something that is a significant challenge, and Volkanovski can’t help but feed off that negative energy.

He loves every bit of it.

“I just want people to remember how they look at Islam now, and the last thing I want is for people to change the narrative. Remember guys, this is David versus Goliath. This is me stepping up to face Khabib 2.0 and all that kind of stuff. I don’t want people taking this away from my legacy.” 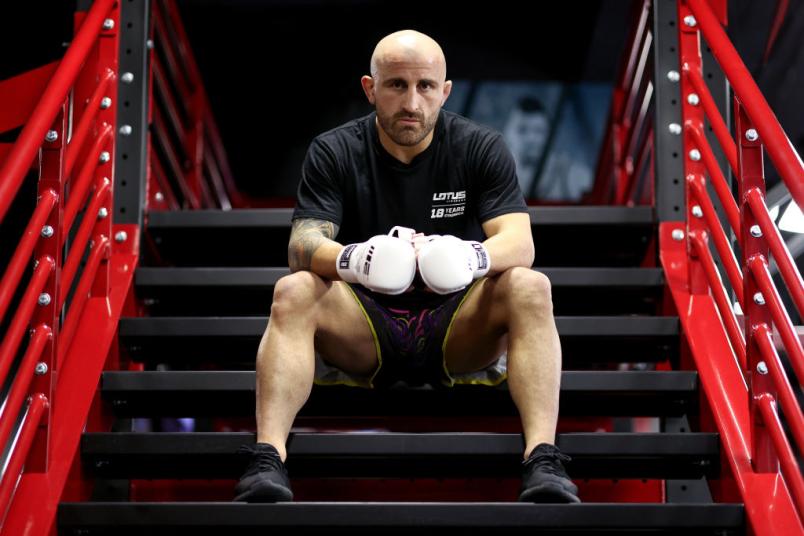 Alexander Volkanovski poses for a portrait during the UFC 284 Media Opportunity at UFC GYM Signature on November 18, 2022 in Sydney, Australia. (Photo by Brendon Thorne/Zuffa LLC)

It’s clear that Volkanovski is fired up for the challenges presented by Makhachev. That’s why he decided to jump right into training camp now rather than wait for the traditional eight-week mark to bring in training partners and ramp up the intensity.

“I’ve never done a camp like this,” Volkanovski said. “It’s not that I didn’t take my last opponents seriously, but this one it’s way more Islam Makhachev-specific.”

By “Islam Makhachev-specific,” Volkanovski means dialing in his takedown defense and focusing on wrestling. That’s how good Makhachev is in those areas. There is no denying it.

“This is a challenge, that is true,” Volkanovski said. “But it’s pretty obvious what the threats are in his game. I think Makhachev knows that I’m no slouch any place the fight goes, and let’s be honest. He hasn’t fought some of the best guys. Even before he fought Charles (Oliveira), I was already looking at him like he’s the toughest guy. I’ve always looked at him like that. He’s always been a great fighter, but the toughest guys wouldn’t fight him. I’m not scared of anybody.”

Check Out The UFC Lightweight Rankings

Volkanovski isn’t throwing shade at Makhachev for his lack of wins over Top 10 opponents. He doesn’t view it as Makhachev’s fault that other fighters weren’t willing to risk their spot in the pecking order against him. 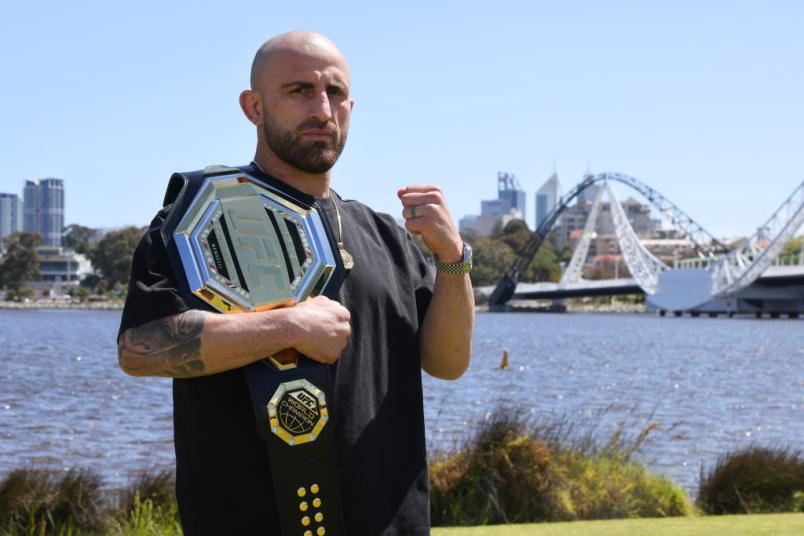 But risk versus reward is something that Volkanovski always has his eyes on.

That’s why Volkanovski decided to have a third fight with former champion Max Holloway. Up 2-0 in their series already, he knew a third victory would go a long way in settling the debate on which of the two would go down as the greatest featherweight in UFC history.

At UFC 276, Volkanovski essentially pitched a no-hitter. He was absolutely lights out and delivered a masterclass on his way to beating Holloway for the third time.

“If I didn’t do that third fight with Max it would have always been people talking about that second fight. Think of the conversations that people were having before the third fight with Max. Now think about the conversation,” Volkanovski said. “Let’s be real, and this is no disrespect to Max, but I felt like it was a risk for Max. Now people don’t talk about him as much and I took away all the doubt.”

WATCH: Volkanovski Reacts In The Octagon To His Third Win Over Max Holloway

Volkanovski believes he’s putting Makhachev in the same position at UFC 284. Beating him now, while his hype is at its peak and before he’s even defended his belt, compounds all that energy and adds it to Volkanovski’s bid as one of the best ever.

It’s Makhachev who’s all-in. If things don’t work out for Volkanovski he still has a whole other division that is chasing him. And while he’s off looking to add a second belt to his trophy case, he hopes a true top featherweight contender emerges. 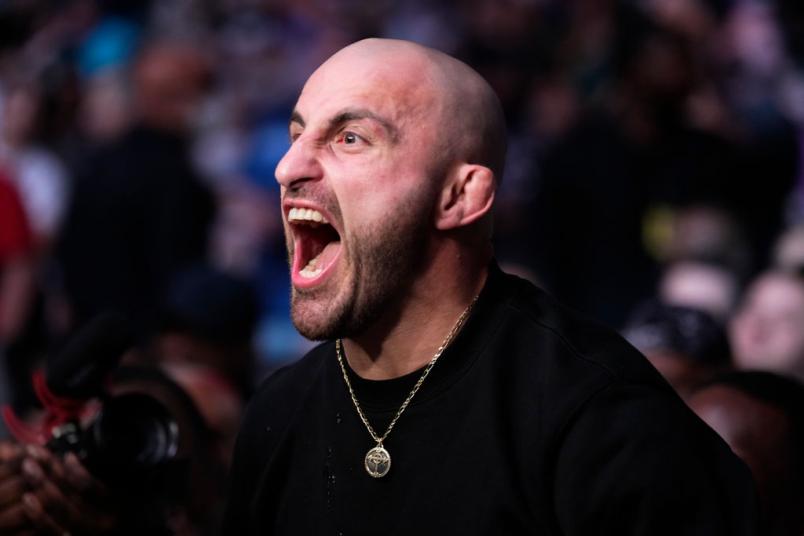 UFC featherweight champion Alexander Volkanovski of Australia cheers from the crowd for teammate Kai Kara-France of New Zealand in his UFC flyweight championship fight during the UFC 277 event at American Airlines Center on July 30, 2022 in Dallas, Texas. (Photo by Chris Unger/Zuffa LLC)

Between Calvin Kattar vs Josh Emmett, Brian Ortega vs Yair Rodriguez, and Calvin Kattar vs Arnold Allen, he expected someone to make a statement. But two of those crucial fights ended due to injury and the other was controversial.

“I was waiting for a real statement.  It was disappointing me, and I was bloody sad that no one could make that statement,” Volkanovski said. “You had three guys (Emmett, Rodriguez, Allen) and someone was going to have to miss out; no matter who it was, they would all have been disappointed. They are all in the same boat.”

That’s why Rodriguez and Emmett will be competing for the interim UFC featherweight title in UFC 284’s co-main event and Volkanovski expects Arnold to be next after that.

“I’m fine with that. I don’t think it’s disrespectful at all. I was okay with it before I even go the lightweight title fight,” Volkanovski said of the interim belt. “Now that Rodriguez and Emmett are fighting, they are going to give me a clear number one guy. It’s setting up my clear next fight at featherweight. I’m looking forward to that. Glad it’s on the same card as me and Islam.”

All that Volkanovski wants is to fight the best. That’s why he’s challenging Makhachev and that’s why he wants one of the featherweight contenders to come to the forefront.

“UFC 284 is going to be a night that people are going to talk about,” Volkanovski said. “I could have just got healthy, defended my belt, stayed on top, and added to my winning streak at featherweight. But that’s just not how I am. What’s bigger than that is taking on fights like this one with Makhachev. You want people to think there is things you can’t do and then go prove them wrong.”

“This is the s*** that can get you from being great to being one of the greatest.”