As He Looks To Defend His Featherweight Throne At UFC 273, We Take A Look At Alexander Volkanovski's Five Greatest Hits
By Thomas Gerbasi, on Twitter: @TGerbasi • Mar. 29, 2022

Riding an incredible 20-fight winning streak, UFC featherweight champion Alexander Volkanovski will put that streak and his title on the line on April 9, when he travels from Australia to Florida to face “The Korean Zombie,” Chan Sung Jung, in the main event of UFC 273. As fight night approaches, we check in to remember five of the defining moments in the career of Alexander “The Great”.

Australia’s Alexander Volkanovski made a statement in the main card opener, as he extended his winning streak to 16 with a second-round stoppage of perennial featherweight contender Chad Mendes.

Mendes and Volkanovski set a fast pace, with Mendes holding the edge on the feet, but Volkanovski not far behind. A takedown by Mendes in the final minute probably earned him the round, but things were just heating up.

A minute into the second round, Mendes rocked Volkanovski and then dropped him with a left hand. The Aussie was up immediately and he got even with some hard punches in return. With three minutes left, Volkanovski got more aggressive with his striking, but Mendes responded with a takedown. Volkanovski got up quickly, and both were now bleeding. With 1:45 left, Mendes got another takedown, and this time he took his foe’s back. In a subsequent scramble, they rose to their feet, and Volkanovski landed several hard shots before a body shot followed by a right to the head crumbled the former world title challenger, prompting referee Mark Smith to stop the bout at 4:14 of round two.

Entering tonight’s card, the only fighters to defeat featherweight great Jose Aldo in the past 13 years were Max Holloway and Conor McGregor. Add Alexander Volkanovski to that exclusive club, as the Australian outworked the Brazilian star over three rounds en route to a unanimous decision victory that put him in line for a shot at the 145-pound crown held by Holloway. 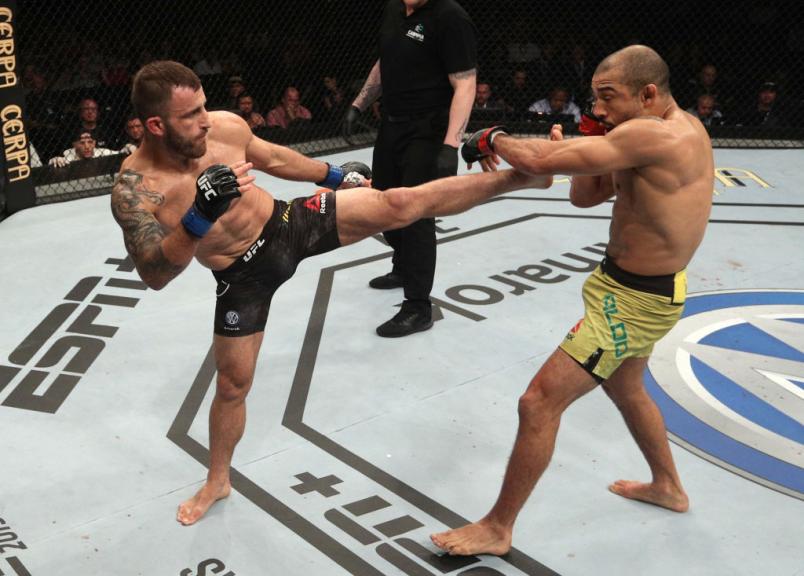 RIO DE JANEIRO, BRAZIL - MAY 11: (L-R) Alexander Volkanovski of Australia kicks Jose Aldo of Brazil in their featherweight bout during the UFC 237 event at Jeunesse Arena on May 11, 2019 in Rio De Janeiro, Brazil. (Photo by Buda Mendes/Zuffa LLC/Zuffa LLC via Getty Images)

Volkanovski had a busy first round, scoring mainly with his kicks, yet each of Aldo’s effective potshots were greeted with roars from the Rio crowd, perhaps influencing the judges in the Brazilian’s favor. Volkanovski kept the pace high in the second, mixing up his attacks to keep Aldo off balance. Aldo kept it close, but he just wasn’t being busy enough to take over, and in the third, Volkanovski pulled away, leaving no doubt when it came to the final verdict.

Alexander Volkanovski’s 18th consecutive win was the most important of his life, as he will be bringing a championship belt back to Australia after winning a five-round unanimous decision over Max Holloway to take the UFC featherweight title in the UFC 245 co-main event.

The action was measured in the first round as both fighters got acclimated to each other, but the harder shots were landed by Volkanovski, who battered Holloway’s lead leg with kicks.

Holloway got a little busier in the second, but Volkanovski stayed disciplined and kept pecking away at the left leg, leaving it marked up heading into round three.

The champion began round three in the southpaw stance in order to protect his banged up left wheel, and a fight proceeded to break out, as the exchanges finally heated up. Both fighters got their licks in, but it was Volkanovski’s consistency that was winning him the fight.

Volkanovski broke from his steady attack to attempt a takedown in the fourth, and while Holloway stuffed it, it was the kind of move that forced the Hawaiian to have something else to be concerned about. Holloway’s fighting spirit was not dulled, though, and he landed some of his best punches of the fight in the frame.

Holloway had a solid fifth round, but in a close fight, it was no surprise that Volkanovski landed more than enough hard shots to give the judges something to think about when the final horn sounded.

Max Holloway seemed to be on his way to regaining his UFC featherweight title in his rematch against Alexander Volkanovski, but some quality adjustments and a late surge by the champion kept the belt in Australia via split decision.

Volkanovski picked up where he left off in their first fight by throwing plenty of leg kicks, but this time, Holloway fired back with kicks of his own, and when he wasn’t answering the Australian, he was mixing up his attack effectively, jarring Volkanovski with a right hand with 1:15 left and dropping the champ with a head kick in the closing seconds of round one.

Holloway, looking like a completely different fighter than he did the first time around, continued to put on a striking clinic with a variety of strikes in the second, and it was showing on the face of Volkanovski, who suffered a second knockdown when he was drilled by a right uppercut late in the frame.

Making adjustments in round three, Volkanovski sought out a takedown, but was turned away by Holloway. Giving Holloway something else to think about was a wise move though, as he was able to tag the Hawaiian with some solid shots.

The fourth was close, Holloway possibly holding a slight edge, but Volkanovski certainly getting some points for a takedown with a little under two minutes left.

Volkanovski got another takedown in the fifth, a key in a pivotal round in which the striking numbers were virtually even. And a final takedown by Alexander “The Great” had fans waiting with bated breath for the scorecards, which went Volkanovski’s way.

UFC featherweight champion Alexander Volkanovski won his 20th consecutive bout and successfully defended his belt for the second time in the UFC 266 main event with a five-round unanimous decision over Brian Ortega in an instant classic. 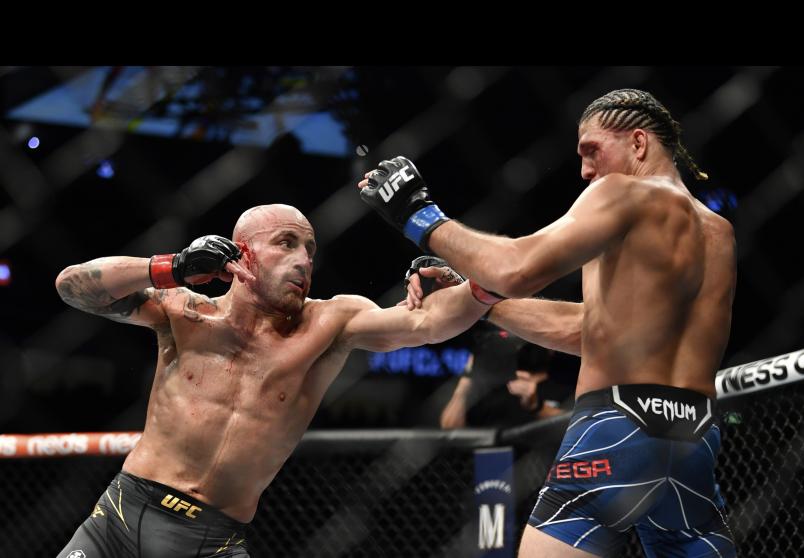 Volkanovski led off with kicks, occasionally following with a right hand, one of them cutting Ortega over the eye. The challenger did get in a couple good counters, cutting the champion in a little bit of payback, and a left hand from Ortega in the final minute also scored well.

Both fighters had their moments in the second round, as the action remained competitive, with neither pulling away yet, but Volkanovski was staying busier.

Ortega started to get more active in round three, and he landed some hard shots that were quickly answered by the Aussie. A clash of heads bloodied Ortega’s nose and he was showing plenty of damage on his face, but out of nowhere, the challenger dropped Volkanovski and locked in a tight guillotine. Volkanovski looked to be in deep trouble, but he escaped and began unloading with both hands. This time, Ortega caught him in a triangle choke, but again, Volkanovski got free and unleashed a barrage of strikes that nearly finished him before the horn intervened.

Ortega was still in deep trouble as the round ended, barely making it to his stool, but after a visit from the Octagonside physician, he was cleared to continue, and he appeared to have his legs back under him early in round four. In the second minute, Ortega got a takedown and went for the choke again, but it wasn’t as tight as it was in the previous round, and Volkanovski easily escaped before firing off more strikes as Ortega still fished for a submission. Volkanovski was relentless, though, and he had the challenger in danger of being stopped once again. The champion put the fight back on the feet in the final minute, and again, Ortega survived.

Volkanovski tossed away Ortega’s first takedown attempt in round five, but the gutsy challenger didn’t stop trying to turn the fight around, as he landed some hard shots on the champion as they wearily stood inches away from each other down the stretch and both left the fans with one more burst of frenetic action.