Lightweight Has His Winning Groove Back, Eager To Keep Momentum
By Thomas Gerbasi, on Twitter: @TGerbasi • Feb. 26, 2021

It took less than two minutes for Alexander Hernandez to get his groove back, but if he needed any more proof, it came in the form of a phone call.

“My grandparents are like my parents,” he said. “They called me afterwards and they're Mexican as can be, so they're like, 'Mijo, you finally beat those demons. You did it.'”

The demons were vanquished in Las Vegas last Halloween, as Hernandez earned his fourth UFC win by knocking out Chris Gruetzemacher in the first round. It wasn’t a long losing streak to be snapped, a devastating injury to recover from, or any combination of factors that could force a fighter to reevaluate everything in his professional life, but after a loss to Drew Dober last May, Hernandez needed a change, and he got it as he made the move from Texas to Colorado to train with the Factory X squad led by Marc Montoya.

And as he prepared to walk out to face Gruetzemacher, he knew it was already mission accomplished. 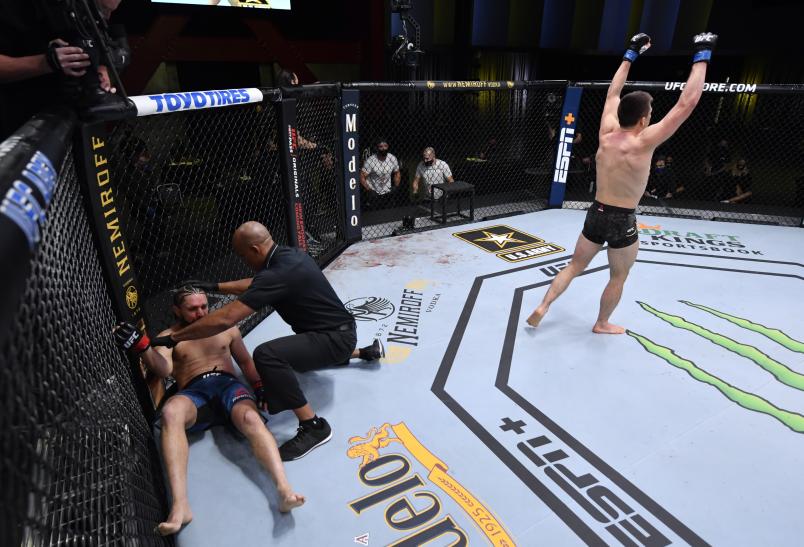 Back in the groove over Chris Gruetzemacher, October 31, 2020 in Las Vegas, Nevada. (Photo by Jeff Bottari/Zuffa LLC)

“I rearranged my entire mental game and my approach, and going out there, I made peace with any outcome and completely removed expectation, which was always my downfall, I think, just having unrealistic expectations,” he said. “And, of course, having Colorado as a backing to put all the physical prowess together, it was a completely different showing than I've ever had and the most clarity I've ever had. I felt really good the whole process.”

It’s funny to hear that from the mouth of Hernandez, because having unrealistic expectations was what made him one of the most compelling fighters to hit the UFC in recent years. And why wouldn’t he have such a high opinion of himself when his first Octagon bout was a 42-second knockout of Beneil Dariush? But soon, losses to Donald Cerrone and Dober, sandwiched around a lackluster decision win over Francisco Trinaldo had Hernandez second guessing himself.

“They'll catch you slipping,” he said. “They caught me a couple times now. You go in there and you plan on a guy sitting down when you land this magical two and then they don't, and then you're like, 'Well what the f**k do I do now?'

Hernandez laughs about it now, but after the Dober fight, he questioned whether he even had what it took to compete at the highest level of the sport.

“I had really, really proficient instructors in jiu-jitsu and boxing and wrestling, and even kickboxing coaches that I brought in and spent a lot of time with, but I never had a mastermind in an MMA coach that could educate me on how to blend it and I really never had a Fight IQ,” he said. “In individual disciplines, I felt good, but when you put them together, I would have to creatively put it together and then figure out how to unleash all this individual work I had done over x amount of weeks and mostly wing it.” 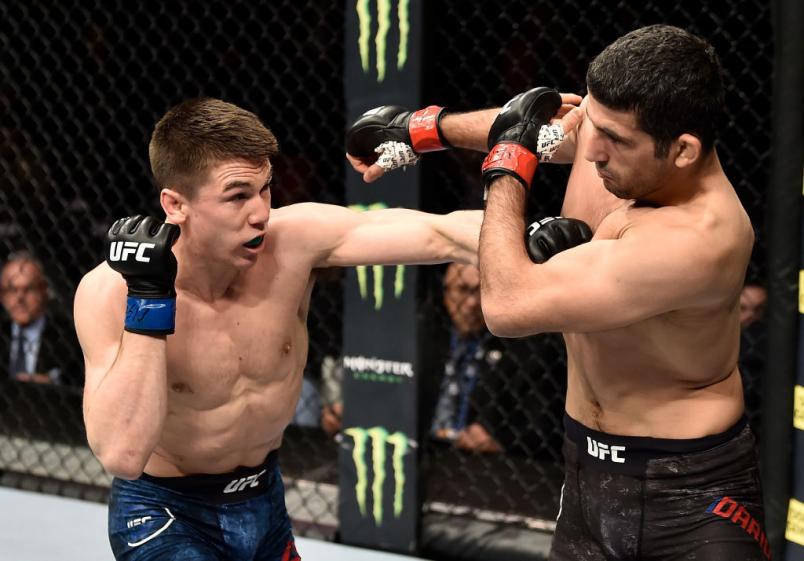 In other words, Hernandez had seemingly made it to the UFC on raw talent, and after a couple wins in the big show, he assumed that was enough. It wasn’t, and he soon found out the levels to the game against Cerrone in January 2019, and it wasn’t going to get any easier. That’s scary.

“It’s extremely daunting,” Hernandez said. “And the worst feeling in the world is being in there and realizing, 'F**k, maybe we didn't prepare.' You're getting caught with a hook and a straight and there's that kick, and you're like, 'You know, I don't remember our guys throwing something like that.' (Laughs) Or they didn't get up off the mat nearly this quick. So there was definitely that learning curve and definitely some lows in between. After the Dober fight, I had a real sobering conversation with everybody. I said, ‘Is this right for me, because I don't think I have it in me to perform. I know I'm good, I know I'm better than that, but I'm going in there and I'm feeling completely lost and I'm not performing.’ That last loss, I didn't even really expect to win after the first 15 seconds just because I wasn't feeling it. I had no sense of direction, and that was really tough, and then going in with top 15 competition every fight is a really difficult path to figure s**t out on. When it works out, you think you've got something going, and then you get another completely different body, a completely different test, but again a Top 15 opponent, and you're like, 'Well s**t, maybe I didn't figure it out.' It was really difficult.”

Convinced by his manager, Jason House, that he didn’t need to walk away from the sport, but instead needed a change in scenery, Hernandez linked up with Montoya and Factory X, and he found exactly what he needed, while still keeping his relationships with his team in Texas strong.

“I need that mastermind because we were playing catch up with rudimentary tools,” he said. “We didn't have the resources we needed. Coming over here, having a veteran coach with loads of experience, loads of training partners with high IQs and experience, you start to piece together those missing blocks, you get all the looks you need and it really bridges the gap quickly. But you need the oversight to do that. You just can't do it on your own.”

That’s not to say it was all sunshine and roses in Colorado, because he still had to get used to Fridays at Factory X. Those who know, know. Those who don’t, find out quick.

“We have heated Fridays,” said Hernandez of the sparring days in Englewood. “We write up fight cards, and guys with fights will have to get in the cage and you could sell that fight card on pay-per-view. We have so many UFC guys and talented guys in there, and so we build it up to be a big deal, and you get used to weathering those storms. And the way that I was approaching those and the way I was fighting, it looked just like my fights. I would smoke a dude in the first round. The second round, I'd get a new body, it got a little iffy, and if I had to do three, I was f**ked. (Laughs) But it was that overzealous style and the mind state behind it that would crumble, and where my head was at going into it was too serious, too strict, too high expectation. And then I was able to switch all that leading up to his last fight, and now I've been maintaining that.” 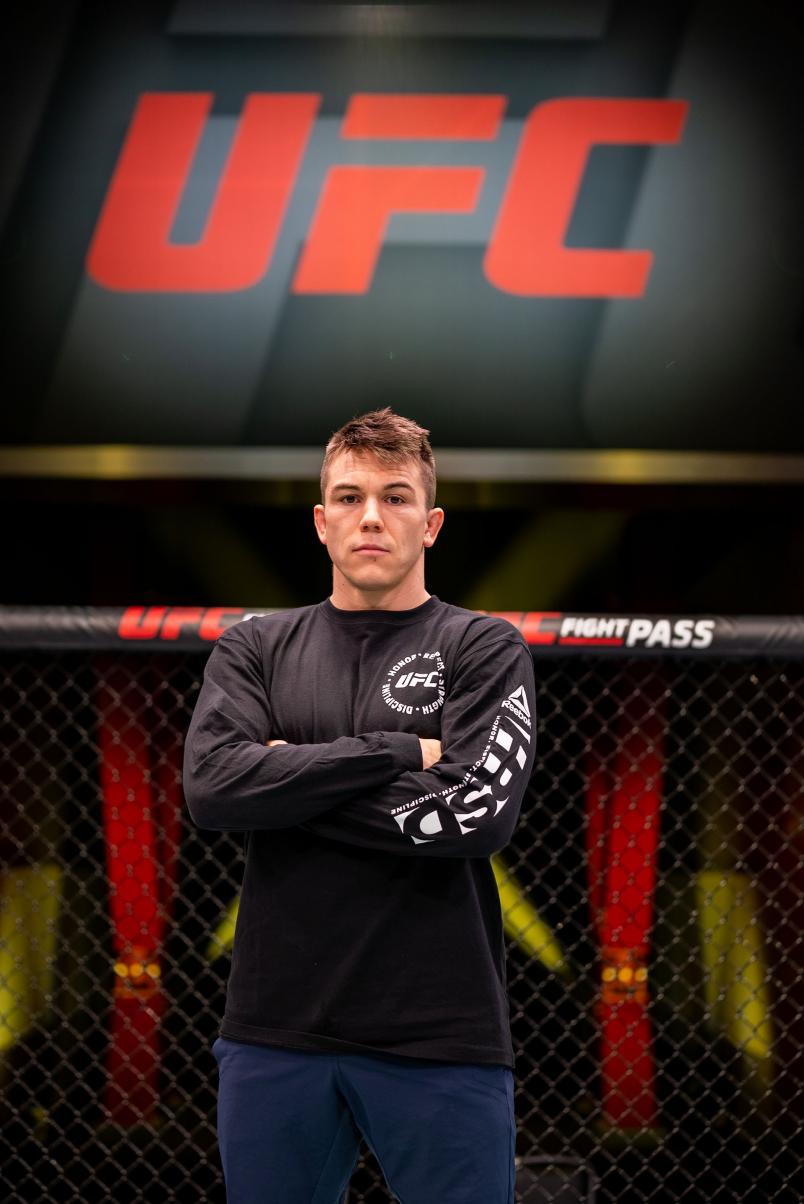 Hernandez tells his girlfriend that’s his “Zen Daddy” state, and while he chuckles about it, it’s what led him to victory over Gruetzemacher and what he expects will be another win this Saturday when he meets Thiago Moises.

“I feel great about the next fight,” he said. “We just gotta get momentum rolling, so I want to keep it rolling.”

That meant more heated Fridays in the lead-up to the bout, but at a certain point, everything came together the way he always hoped it would. And it took more than talent and a new team to make that happen; it required Hernandez to be honest with himself, and that’s always been one of his gifts. Only he would call it something else.

"He looks young in the game, he looks young in experience and he's callow like I was."@TheGreat155 talks about his #UFCVegas20 opponent Thiago Moises and about how he's flipped a switch in his mindset since moving to Colorado 🔊⬆️ pic.twitter.com/4SIMT3EXp8

“I don't know if you call it honesty as much as awareness,” he said. “I always pride myself on being hyper-aware. By the same argument, maybe you're not that f**king aware, dude, because you got smoked a couple times when you were talking this big game. (Laughs) But even the sobering awareness afterwards, I always try to have those real conversations with myself and then just tell it transparently. But I do pride myself on awareness and adaptability, and I think those two things are why we're seeing a real astronomical difference in performance, even though it's only been one fight.”

This weekend is the second fight for Hernandez as a Coloradan and if he gets that momentum rolling, we may be soon talking of him in the same sentence as the fearsome foursome that recently headlined UFC 257 in January: Dustin Poirier, Conor McGregor, Michael Chandler and Dan Hooker. Funny, he’s been thinking the same thing.

“That's so within reach,” Hernandez said. “I'm a big McGregor fan and I think it's hilarious when UFC guys are hating, because man, you're really just a hater. (Laughs) You might as well be as bad as these online trolls. When that guy wins, it's good for the sport, whether you like him or not. But I am a longtime fan, so I didn't like to see the man lose, but watching that main event and that co-main event, I saw all the holes in the world I need to see between those four top contestants and they're all within arm's reach. That's something I couldn't have said this time last year or even the summer of last year. But what I've seen now and my understanding and the way I look at the game thanks to Montoya, I feel like Neo after getting shot in the hallway, and then he stands up and everything's in code. That's how I feel like I'm looking at the game right now.”