Lightweight Reboots And Reflects On Move To Colorado And Factory X
By Thomas Gerbasi, on Twitter: @TGerbasi • Oct. 28, 2020

It was a serious moment in the fighting career of Alexander Hernandez, but he had to laugh.

Competing at the highest level of the sport in the UFC, and in one of the promotion’s toughest weight classes, to boot, Hernandez had hit a plateau. The talent was there, but maybe he didn’t have what he needed in the gym back home in San Antonio.

He knew it. His coach knew it. And his training partners knew it.

“I’m a f**king electrician,” said one of Hernandez’ teammates. “Why am I your training partner?”

The two laughed. But it was true. And after Hernandez was stopped by Drew Dober in May, turning a 2-0 UFC start to a 1-2 skid, he had to make a change. 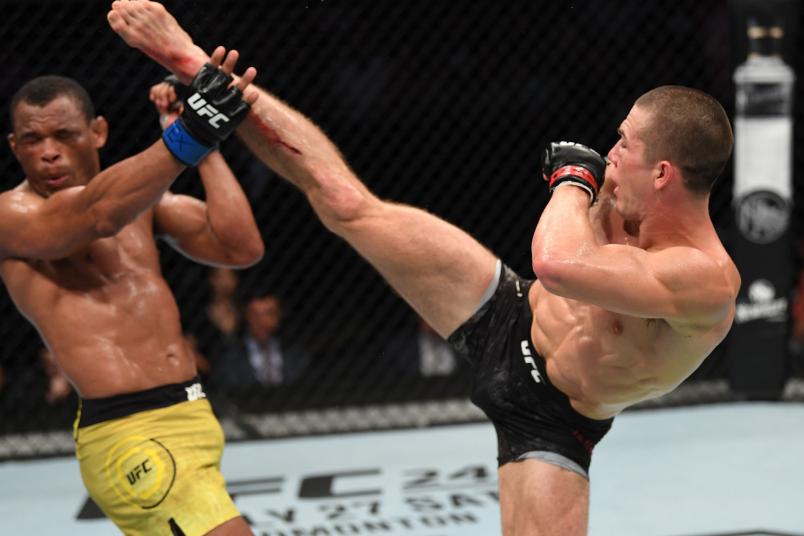 "It was real tough,” Hernandez said of what took him from San Antonio to Colorado and the Factory X squad. “It kinda sucks that it always takes the darkest moments to make the biggest decisions like that. Sometimes it takes an unnecessary L - maybe it was super necessary - before you realize you need to make those big adjustments. After that Dober loss, you run through a negative whirlpool of thoughts and you kinda wonder where you're going wrong and what you need to adjust and just where you're at. For me, it was just trying to figure out where the hell was I at that fight.”

Hernandez didn’t fight poorly against Dober; he just wasn’t the better man that night. And that reality can easily be explained away by fighting during the COVID-19 pandemic, in a makeshift camp because of that new reality, and on a UFC 249 card that was up in the air until a few weeks before fight night.

Hernandez isn’t willing to take that out.

“That's a universal issue, right?” he said. “It's not like I was the only guy dealing with COVID problems. Maybe we just had smaller facilities to manage the storm. I had a buddy say, ‘If you go through that, everything after that is gonna be pretty easy.’ I do think there were some underlying issues. That's with anything, though. When the s**t hits the fan, you see the infrastructure you had built in preparation for that and I just think what we had prepared wasn't ready to weather a storm like that and maybe it showed.” 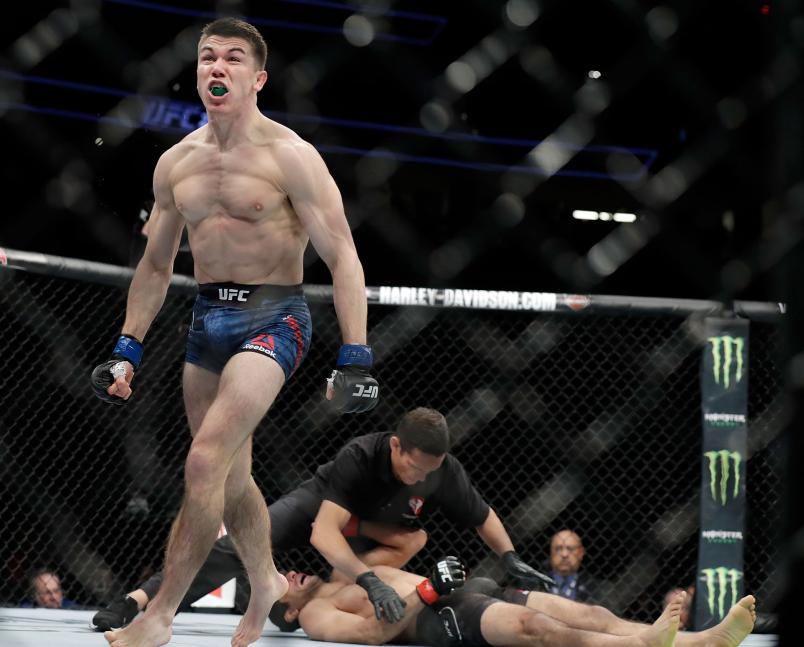 Now after storming out of the gate with wins over Beneil Dariush and Olivier Aubin-Mercier in his first UFC bouts, Hernandez had lost a high-profile bout to Donald Cerrone, was lackluster in a close decision win over Francisco Trinaldo, and now had the defeat against Dober. It got so bad for Hernandez that he wondered if he was built for this.

“You go to that dark place after any loss, especially after that one (against Dober) because aside from not really feeling all in attendance, I just felt like I have a habit of not performing sometimes,” he said. “I would say even in the Cerrone fight, I felt like I didn't perform. People are like, ‘You did perform; you just lose some.’ And I'm like, nah, I feel like I really lost that because I didn't perform. I felt like I choked more than I lost a bout. So long before I pointed any fingers at my team or anything else, I blamed myself. Maybe I'm not right for this. I know I'm really good and I do great in the gym, but being a mixed martial artist in the gym is not being a fighter. You gotta be good at fighting to be a good fighter. Maybe that's not me. Maybe I'm just not turning the corner.”

Hernandez let his feelings known to his longtime coach, Jason Yerrington, and his manager, Jason House. Yerrington had the bedside manner of a veteran surgeon.

“I don't think so, but there's definitely things you need to ask yourself,” he told Hernandez.

House was a little more blunt.

Hernandez knew what needed to be done next, and while leaving a team is always a tough thing to do, his squad and his coaches knew it was what was best for a fighter chasing a UFC belt.

“When we were really honest with ourselves and looked in the mirror, it was like, man, I don't think we really have what is required at this level at home,” said Hernandez. “My coaches and my teammates were all really part-time. So we had a ‘come to Jesus’ about it and maybe we needed more so we could do more. That was the honest conversation we had.”

But where would be the 28-year-old’s next destination? He hit a few gyms, was treated well by respected coaches and fighters, and as the visits piled up, the decisions became harder to come by.

“Everyone was so nice and hospitable and they're giving you their time and you're working with everyone, and it feels like you're breaking up with a girl you like every single week,” he said. “I was like, man, I don't want to do this anymore.”

But one coach and team in particular hit a positive nerve with him, and that was Marc Montoya, head coach at Factory X.

“Marc Montoya really stuck with me, so when I made that decision, originally I thought I would live in a guest house or as a guest somewhere and I'll get through a camp. And assuming everything goes well, we'll make a big move. Then I thought about it and talked to my girlfriend about it, and we said let's just go big or stay home.” 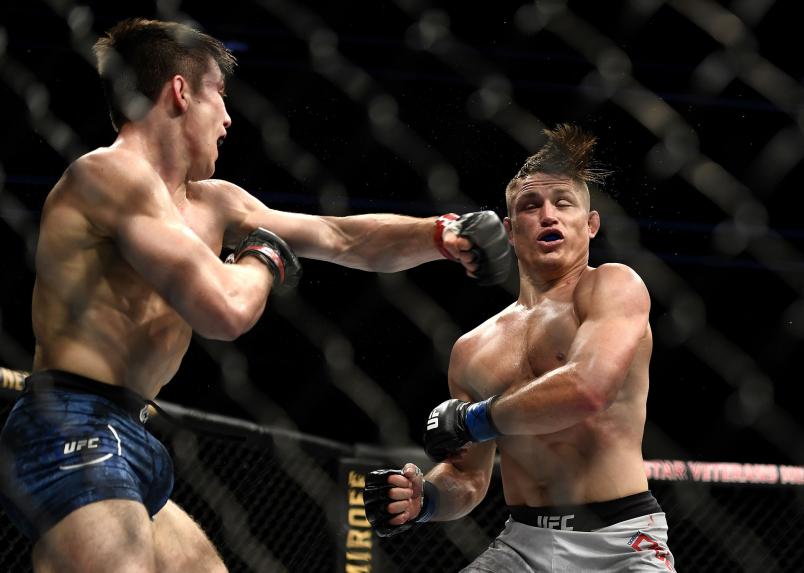 Hernandez vs Dober, May 13, 2020 in Jacksonville, FL (Photo by Douglas P. DeFelice/Getty Images

Hernandez and his lady went big, moving to from Texas to Colorado. And with his first fight with his new team coming up this weekend when he faces Chris Gruetzemacher in Las Vegas, he couldn’t be happier. Or more confident that he will be returning to his winning form.

“It's kind of surreal,” he said. “But it's definitely been an amazing experience and I'm glad I did it this way instead of halfway in because it just wouldn't have reaped the same rewards, I think. Once I made the move and got settled...I haven't felt this level of confidence since the Cerrone fight. And that was something I was battling with since that fight. Being honest with yourself but also being confident.”

As for everyone back home, Hernandez is far from done with his former coach and team.

“I'm still bridging my Ohana team and my San Antonio family and everything,” he said. “I didn't just part ways and we never speak again or see each other on the holidays. My old head coach still comes out here and we work and it works out really well because he's really a ground specialist and Marc is an MMA wizard but he specializes on the feet, so putting them together was really an incredible coalition. And getting the knowledge and sending it right back to San Antonio and the up and coming guys at my own gym was important for me too. So, we're still all connected, which is good.”

Looks like Hernandez found that rarity of rarities in the fight game – a situation where everybody’s happy with the outcome. Now all that’s left is for Hernandez to get used to the snow and cold in Colorado. Is he ready?