A Move To Featherweight And A Shift In Mindset Has Alexander Hernandez Feeling Like He's Primed To Shine At UFC 282: Błachowicz vs Ankalaev.
By Thomas Gerbasi, on Twitter @tgerbasi • Dec. 9, 2022

In hindsight, maybe debuting in the UFC with a 42-second knockout of Beneil Dariush wasn’t the best thing for the career of Alexander Hernandez.

Sure, it put him on the map in the lightweight division, got him ranked, and put in motion a string of big fights and opportunities. But as he soon found out, fighting among the monsters in the 155-pound weight class came at a cost.

“I've always been quick, I've always been the fast guy,” Hernandez said. “And that's something I would tell myself at '55. ‘You're strong and you're very quick, so you're gonna have a speed advantage on these guys. They do have the size advantage, so you're gonna be strong, but they're gonna be bigger and they might feel stronger also. But we'll be faster.’ That was from the Dariush fight where I was like, man, I feel like we're moving on two different speeds here. I'm a lot quicker and I can crack this guy, so maybe we can replicate this recipe across the board where we can evade them, be quick, be technical, then we might be able to get away with the lack of size.”

It worked in spurts. The Dariush fight was followed by a win over Olivier Aubin-Mercier which led to a high-profile 2019 bout against Donald “Cowboy” Cerrone. Hernandez lost that one, then alternated wins and losses over the next three years. When he was on, with knockouts of Chris Gruetzemacher and Mike Breeden, he looked like a killer. When he wasn’t, it was clear that the Hernandez of the Dariush fight wasn’t the same fighter. So almost immediately after a February loss to Renato Moicano, Hernandez decided that he needed to shake things up.

“When I got out, you get a whirlwind of thoughts and everything, but I would say maybe within 24 hours, but for sure within that week, I said we gotta make a change. This just has to feel a little differently, and it's this constant battle - is it physical or psychological? And a hundred percent, it's both, but there is a big physical element to it.” 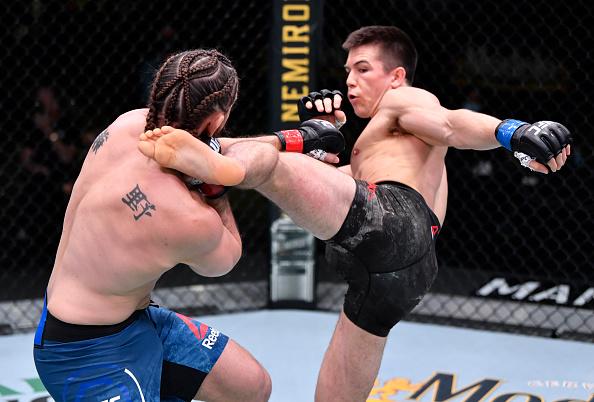 How big, Hernandez would go into the Octagon on fight night feeling like he was giving up at least 12 pounds to his opponents, and as he points out, “When you go toe-to-toe with somebody, that's a big deal, especially at those lighter weights. You give me 12 pounds on anybody, I'm gonna smash him.”

So the decision was made – drop to 145 pounds and give the featherweight division a go. That experiment starts at UFC 282 on Saturday when he meets up with Billy Quarantillo, and in the lead-up to the fight, Hernandez feels like he made the right call.

“I'm really excited about this move to 145,” he said. “That feels like that could have been a good decision a while ago, but the mixed bag of results kind of skews your judgement, so maybe I hung around that '55 a little longer than I could have. But this put life into the career and into the struggle. I've had this fickle career over the last couple years and if we wanted to make a change, wanted to do something radical, I think this would be it.”

It is radical, but maybe the perfect move for the 30-year-old, who is all-in on a career that is still promising, and perhaps even more so at 145 pounds. But as he points out, he’s always been all-in. 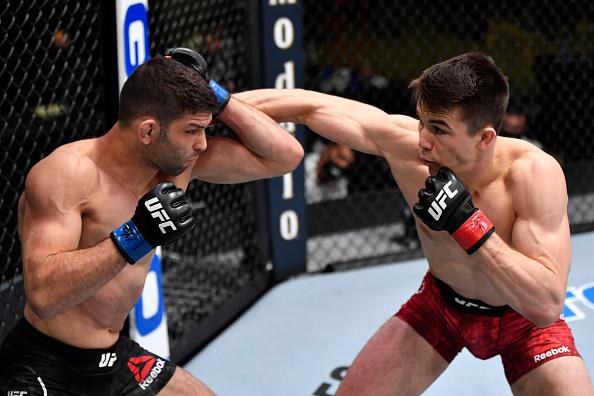 “I moved out to Colorado and got a house out here, so I'm as in as in can be,” laughed the Texan. “The weight change is really stimulating, so that's a nice jolt to the pulse to really engage myself and feel like we can make growth somewhere, that we can make a change, that we can evolve, and I'm really excited to break into the featherweight division, especially with the landscape of it all. So we're all-in, and now we're all-in at featherweight.”

Even better, Hernandez is happy – with the fight game, with life, with everything. And he can thank his lady, Alexis, for that.

Fighters On The Rise | UFC 282: Blachowicz vs Ankalaev

“One thing she said, because once the fight gets announced and the gears start ticking and you see things kind of switch subconsciously, is to stop. Let's make this the mantra, that no matter what, life goes on. We had this real big scheduling landmark when you put a date on a fight. The dialogue becomes everything before or after the fight. That's the new compass. Let's not even have that dialogue. The fight didn't go the way we wanted to last time, we still got our house. This fight, win, lose or draw, we're still gonna go on our trip, we still have plans of getting married and things like that. We're still gonna do all the things we want to do - it's not contingent on the results of this event. So let's not make fighting life, let's just make fighting a part of life. Keeping that mindset makes things a little bit more enjoyable, more light-hearted, makes you remember why you're doing it in the first place. That's been a really big deal in finding balance and finding happiness and joy in it.”