The Ups And Downs Of The Fight Game Have Helped Alexander Hernandez Find His Groove Ahead Of UFC 271: Adesanya vs Whittaker 2
By Thomas Gerbasi, on Twitter: @TGerbasi • Feb. 10, 2022

On October 1, 2022, Alexander Hernandez will turn 30 years old. It’s a major milestone for everyone who makes it to that age, often prompting some (or a lot of) reflection on where someone has been, where they’re at, and where they’re going.

Alexander Hernandez is also a thinking man’s fighter, always analyzing and breaking things down. So has he started having that 30-year-old conversation with himself?

“I'm not because we've got the whole year until we get there,” he said. “That's why I'm not prepared for that. A lot of that conversation's gonna depend on February and, God willing, June or July. There's gonna be a few more markers to happen to where we're sitting back and we're like, 'Hey, this is all right,' or 'Man, I wonder what they're doing in the mortgage business right now.'”

Hernandez, a former mortgage loan officer, laughs, but he’s not going anywhere. Things are going too well for the lightweight standout in the sport he decided to leave the world of banking for. Entering his Saturday meeting with Renato Moicano, Hernandez has won two of his last three, with first-round knockouts of Chris Gruetzemacher and Mike Breeden sandwiching a decision loss to Thiago Moises. The win over Breeden saw the San Antonio product in particularly sharp form, even if we only got to see 80 seconds of him before he ended the fight.

“Shoot, you do that five times in a row, it would be all right,” he said. “If they could all go that well, that would be sweet. But that was the first win I felt bad about. Of course, we're trying to do that to each other, but I didn't really feel good about it. I felt good and grateful to get a W, but I didn't feel good about making that that guy's debut experience.”

Breeden’s UFC debut came on short notice, with the Missouri native stepping in for the injured Leonardo Santos. And while the two come from different camps, Breeden’s coach – James Krause – is close with Hernandez’ coach – Marc Montoya, and the Glory MMA and Factory X teams are almost seen as sister schools. But business is business, and Hernandez did what he had to do to get the win. 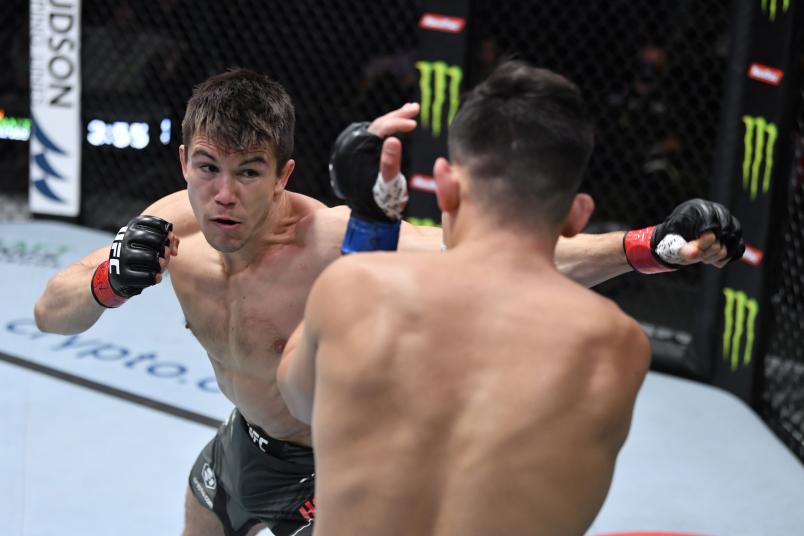 Now it’s off to Moicano, and in preparing for the Brazilian veteran, Hernandez has had to remind himself of why he’s here and why it’s important to enjoy the ride.

“I feel good, I feel confident, and I'm trusting in the work I've put in,” he said. “I'm going to be entering in a more state of calm where I'm not overthinking things. I'm reminding myself to enjoy the process. I'm gonna have some moments of calm and maybe try to manufacture some joy.”

MORE UFC 271: Countdown | How To Watch UFC 271 In Your Country | Significant Stats

Hernandez laughs when asked about the manufacturing joy part, but not allowing that to come into the equation has been an issue for someone who is always thinking about the hundred ways things can go right or wrong in a fight or a training session.

“That is, at times, my greatest detriment,” he said. “I've always said that with wins or losses. I'm the only guy who's really getting in my way of enjoying them or the guy who's getting in my way of seeing the result I need. And that's exactly why. I kind of need to get out a little bit, I need to stop thinking. I need to take a little break and not overthink and just appreciate where we're at right now. And let's make this fun again. Because I can beat a problem black and blue. I'm constantly walking that line of 'Hey bud, you're doing too much,' or 'Hey, this is a good awareness check, this is the change we need to make.' So it's constantly a juggling act; it never really stops.”

Hearing that, it’s a wonder that Hernandez hasn’t had the 40-year-old talk with himself already, let alone the 30-year-old talk. But he is a work in progress, and thankfully, that work is progressing as he continues to move forward in one of the sport’s toughest weight classes. Some would say he’s back to being the kid who came out of nowhere to beat Beneil Dariush and Olivier Aubin-Mercier in 2018 before a loss to Donald Cerrone sent him back to the drawing board. 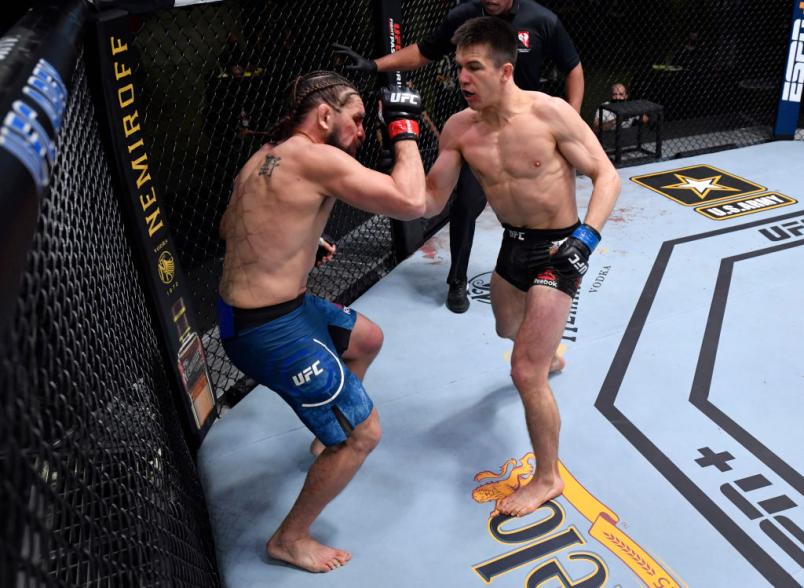 Hernandez wouldn’t say that, though.

“No, I'm not back to where I was before; I really couldn't be,” he explains. “Maturity and experience have a way of doing that to you. You can't ever go back. The more you grow, the more you learn, you can't ever really go back, and there's a bliss to the ignorance, but there's a consequence to not having the truth. So I'm constantly going back and forth, where I'm like, 'Man, I kinda miss that cocky mother**ker.' He's still there, but sometimes I wish he was a little stronger. Sometimes I wish that arrogance came through a little stronger because there's a certain force field that comes with that, that makes you feel so invincible. But with that guy, I was often shocked sometimes by the moment because it was like, 'Man, you kind of made this out to be something it wasn't.'

“Now, it doesn't matter how I feel; it just doesn't,” Hernandez continues. “I know I've got a level of experience and I actually feel like a veteran now and I know no matter what, when I go in that cage, I'm gonna perform. No matter what. And before I didn't feel that. I almost had this blind confidence, and I'd go in and be like, 'Oh s**t, this moment was bigger than I thought,' or 'He's not responding the way I expected,' and that's gone now. I don't have this giant hubris that I'd like to have sometimes, but I also have a ton of certainty and a ton of clarity in what I can do and what I will do when those lights are on. And that's reassuring. That really tucks you in at night, so that's not too bad.”