Alexander Gustafsson - The Sky's The Limit

"I don’t feel any pressure at all. I’m just doing what I love to do, and I’m just enjoying every day." - Alexander Gustafsson 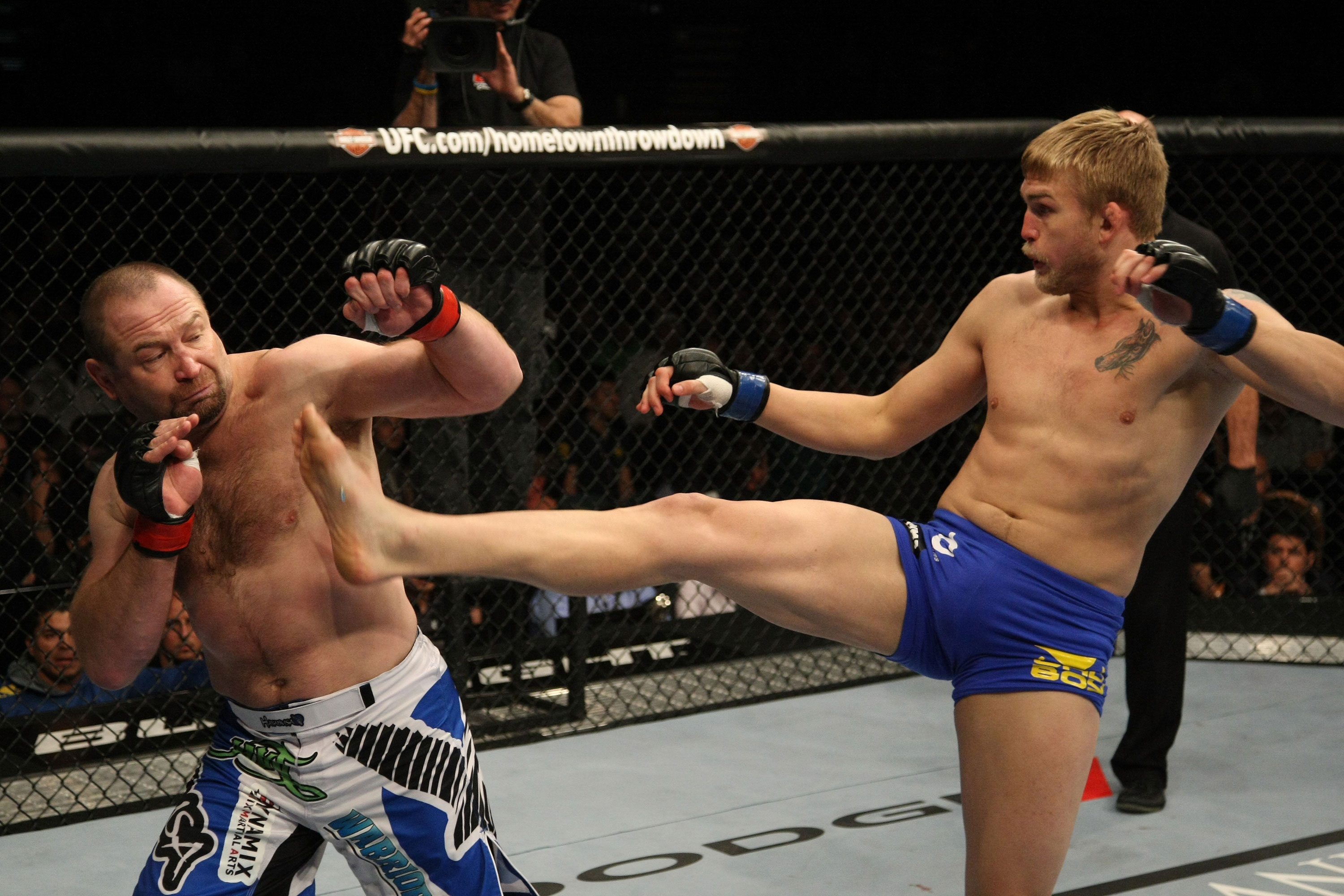 When the UFC first announced their intentions to hold an event in Sweden, Alexander Gustafsson was preparing to face Vladimir Matyushenko at UFC 141. Though he was focused on “The Janitor,” the opportunity to compete in front of his family and friends in Stockholm had certainly crossed his mind.

He described the potential opportunity as “a dream come true” back in December. After earning a first-round stoppage victory over Matyushenko to extend his winning streak to four, Gustafsson’s dream is about to come true as the talented striker is set to headline this weekend’s UFC on FUEL TV event.

All the elements are there to make this the most pressure-packed fight of the 25-year-old prospect’s career.

The local light heavyweight stands as the star of the show, and the most accomplished and recognizable name on the highly European lineup. Originally matched up with veteran Antonio Rogerio Nogueira, Gustafsson was thrown a curveball midway through his training camp, as the man known as “Little Nog” was forced out of the bout, and replaced by the returning Thiago Silva.

In addition to fighting at home for the time in almost three years, many people view this as Gustafsson’s chance step into the spotlight, and show why whispers that he might one day be a potential threat to light heavyweight champion Jon Jones have been growing louder with each subsequent victory he collects in the cage.

That combination of factors could easily leave Gustafsson feeling like he’s under the gun as he gets set to step into the cage at the Ericsson Globe Arena on Saturday night. Unfortunately for Silva, the only thing the talented Swedish contender is feeling is excitement.

Gustafsson knows that opportunities will come for him in time provided he keeps winning, and instead of focusing on where a victory in this fight will lead him, he’s more interested on the impact the UFC’s arrival in his homeland will have on the sport moving forward.

“I see myself as a top 10 guy, and I want to fight the best guys in the division, but like I’ve said before, it’s just one fight at a time. I don’t have any hurry. I just have to win my fights; that’s the most important for me.

“The sport is getting big in Sweden,” he continues. “There’s so much talent from the young guys, and this will be progress in the right direction. More gyms are going to pop up now, and in the near future, you’re not going to have to fly overseas (to train), so it’s on the right path.”

Making the journey across the Atlantic is something Gustafsson has been doing regularly since he suffered the only loss of his career to Phil Davis at UFC 112.

The former Division I National champion used his tremendous wrestling advantage to control Gustafsson on the ground, eventually forcing the lanky striker known as “The Mauler” to tap to an anaconda choke late in the first round. Looking to improve his abilities on the mat and continue to evolve his training, Gustafsson turned to the man who had just beaten him and the team at Alliance MMA for help.

“Right after that fight, I talked to his coaches, and we invited Alex out — so did Phil — and we knew he’d be an asset to have as part of the team,” explains Eric Del Fierro, the head coach of the San Diego-based team that includes Davis, Brandon Vera, and UFC bantamweight champion Dominick Cruz. “You could tell he had good rhythm in his striking, but a lot of these guys from Europe are missing the wrestling component that you need, so we invited him out.

“His boxing coach Andreas (Michael) called me up and said, ‘We’d like to come out and possibly do a camp with you guys.’ They came out for Cyrille Diabate, and he did a full camp with us, which was about nine weeks, and we just worked on his weaknesses, and gave him a bit of a different look at the fight game.”

The improvements were noticeable right away, as Gustfasson controlled the French veteran throughout the contest, finishing him in the second round by rear naked choke, and he’s continued to look more impressive in each successive outing.

“It’s astonishing that he’s in there finishing all of his opponents and still flying under the radar, which is good for him,” says Del Fierro of Gustafsson, who has finished all five of his wins inside the Octagon, and 12 of the 13 fights he’s won overall. “I told him to enjoy it because you’re only going to be there for so long. The spotlight is going to be on you, and you’re going to have to rise and shine with that spotlight.”

Silva, an American Top Team product with lethal striking and an underrated submission game that isn’t often utilized, has lost just twice in his career, both coming to former light heavyweight champions — Lyoto Machida at UFC 94, and Rashad Evans just under a year later at UFC 108. The 29-year-old Brazilian is returning following a one-year suspension resulting from his use of a banned substance before his UFC 125 bout with Gustafsson’s Alliance teammate Brandon Vera.

Though he’s quick to give Silva credit for his accomplishments in the cage, Gustafsson admits he’s less than impressed with his opponent’s actions and attitude in his bout with Vera.

“I think he’s a great fighter, no disrespect. He’s a really great fighter, and he’s beaten some tough guys, but as a sportsman, I don’t think he behaves too good. His lack of respect for his opponents and stuff, that just motivates me even more, and makes me want to fight him even more. I’ve wanted to fight him for a long time now, and I’m glad I finally get the chance.”

Del Fierro is excited for the matchup as well, as he believes it will be a great opportunity to see where Gustafsson stands in the deep and talented light heavyweight division.

“Thiago is a stern test; he’s a tough guy, he always brings the fight, and never goes backwards, so we’ll see how Alex deals with it.”

Talk of Gustafsson being a potential challenger and threat to UFC light heavyweight champion Jon Jones started to get louder following his win over Matyushenko back in December. Having rattled off four consecutive victories, and dispatched a pair of durable UFC veterans in back-to-back outings, it’s understandable for people to view the 25-year-old Swede as a future championship contender in the 205-pound division.

It’s a feeling Del Fierro shares, even if he doesn’t say those words exactly.

“He’s literally a kid, and he’s a kid that enjoys training. He never shows up just hating his life; he loves every moment of it. He’s a phenomenal athlete, and his boxing coach, Andreas Michael, I can’t say enough about him; the guy is awesome. Together, I think we were able to give Alex a better understanding of striking for MMA —not necessarily just boxing — and the kid just has fun.

“His jiu-jitsu game has evolved a lot around his body type, and showing him how to use his own leverage instead of the basic understanding of jiu-jitsu, and the kid’s doing great. I don’t think he’s even at fifty percent of his potential.”

Gustafsson sums up his potential a little more succinctly.

“For me, the last couple of years have been great. I’ve been taking the sport seriously; it’s been more like a job, not just a hobby. I train harder, I know where I train, and there is more thinking behind the training.

“I’ve got my whole club in Stockholm where I’m based, and my head coach, Andreas Michael, is with me 24-7. He’s helped me a lot with everything, and with Coach Eric’s help and everyone at Alliance, it’s been a lot of progress. I’m still just young in the business, and I can be so much better, and I will be. I just want to learn and progress every day.

“When it comes to how good I can be, the sky is the limit.”