"I've wanted to fight on pay-per-view for so long, and now I have the chance, so I'm just happy to fight on the main card." - Alexander Gustafsson 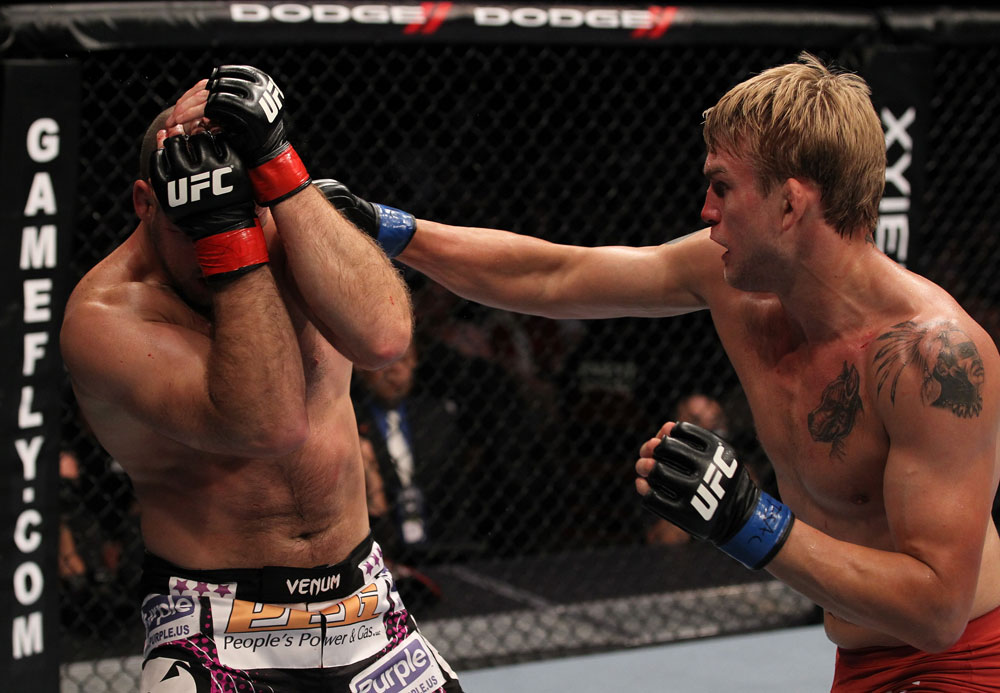 With the UFC light heavyweight division spending a great deal of time in the spotlight this year, it's surprising that Alexander Gustafsson hasn't garnered more attention.

Not that the 24-year-old from Stockholm is complaining.

Despite a three-fight winning streak that includes a televised second round technical knockout win over Matt Hamill at UFC 133 in August, Gustafsson has remained outside of the torrent of media coverage generated by Jon Jones' climb to the top of the 205-pound division. While various others have been drawn into the storm, the 12-1 talent has not, leaving him plenty of time to focus on more important things.

"If I have a lot of media, for me it doesn't really matter; I just train and that is my focus. A little media is also very good though, but I stay focused all the time."

For the second time this year, "The Mauler" has set his focus on veteran Vladimir Matyushenko.

Originally scheduled to meet at UFC 133, Matyushenko was forced to withdraw from the contest due to injury, setting up the aforementioned bout with Hamill. Following Gustafsson's destruction of the former Ultimate Fighter standout, the UFC re-booked the wily veteran and the promising youngster, slotting them on the pay-per-view portion of the final event of the year.

"For me it's an honor," Gustafsson said of the chance to make his pay-per-view debut. "I've wanted to fight on pay-per-view for so long, and now I have the chance, so I'm just happy to fight on the main card. I'm really looking forward to it."

Arguably the top prospect in the talent-rich light heavyweight division, Gustafsson has serious knockout power, as exhibited in his UFC debut against Jared Hamman and his second-round victory over Hamill in August. Equally impressive has been the dedication he's shown to his ground game and the results those efforts have already started to yield.

After suffering the only loss of his career in a bout again Phil Davis at UFC 112, Gustafsson started training with the unbeaten former Penn State wrestling standout and the team at Alliance MMA in San Diego, California. In each of his next two outings, the knockout artist finished the fight on the ground, submitting both Cyrille Diabate and James Te Huna by rear naked choke.

"I'm a striker — that's my bread and butter. I keep the fight on my feet and trade, but like everything else — all the other skills — you need to be good at them, and that's something I need to train.

"I train everything, even my striking, and that's something you need to have with you all the time. Not just train what you're good at, but also what you're bad at — that's how you get better."

Gustafsson has continued to train both at home in Sweden and with the team at Alliance alongside the likes of Davis, UFC bantamweight champion Dominick Cruz, heavyweight Joey Beltran, and fellow UFC 141 competitor Ross Pearson. The soft-spoken and humble 24-year-old is grateful to have the opportunity, and recognizes the evolution of his talents.

"I'm based in Stockholm; that's where I'm training most of the time. When I have a fight coming up, I go to Alliance with Eric del Fierro and the guys there. I go forth-and-back all the time. I like it a lot — it's something I'm really glad I get to do.

"I've had a lot of improvements. I feel much better in every category; I'm getting better every day, and improving every day. It's the best coaches in the world, the best fighters in the world, and the best team in the world, so I'm just honored to be a part of the team, have a good time, and train hard."

Gustafsson is also grateful the opportunity to step into the cage with a talented veteran like Matyushenko.

"Finally I can fight him; it's been so long now. He's a really tough guy, and I want to fight the best, so I'm really looking forward to the fight. I think it will be a really tough, tough fight."

This fight is a litmus test for Gustafsson, one that has the potential to propel him to new heights entering 2012.

As UFC President Dana White is quick to remind people, Matyushenko is a tough out for anyone. The man who fought Tito Ortiz for the light heavyweight title at UFC 33 is a powerful wrestler with "old man strength" who has used his experience, guile, and a underrated striking to garner four wins in five fights since returning to the UFC following a six-year hiatus in 2009.

The only man to topple Matyushenko since his return was Jon Jones, who capped off his 2010 campaign with a win over "The Janitor" before embarking on his championship run this past year.

While Gustafsson might not follow the same path as the current light heavyweight champion if he's able to come away from UFC 141 with a victory, securing a fourth consecutive win against a well-respected veteran like Matyushenko will open some eyes, and elevate the soon-to-be 25-year-old from prospect to contender.

Just as he hasn't been caught up in all the attention surrounding his division over the last year, Gustafsson isn't worried about where this fight will take him and what's next in his career either. He prefers to keep things simple instead.

"Just have fun — have fun training, take one fight at a time, and try to win all my fights. That's my goal right now — to win this fight and have fun doing it."