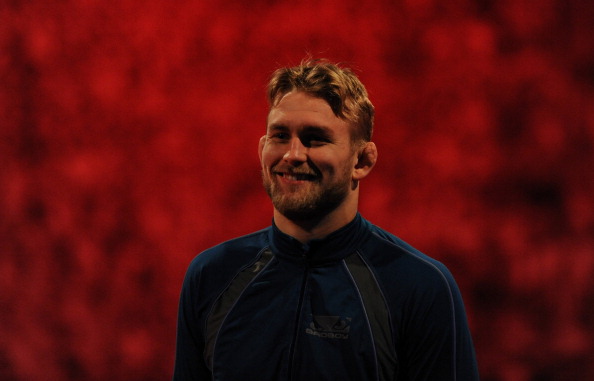 Alexander Gustafsson laughs when you ask him what life is like for him in Sweden these days. About to headline the 30,000-seat Tele2 Arena in Stockholm in a fight against Anthony Johnson, the man who put Swedish MMA on the international map is his characteristic humble self.

“People notice me over there, but it’s not like I’m a rock star or anything,” Gustafsson said. “It’s more laid back (in Sweden). People let you have your privacy and they let you be. Of course, sometimes they come up to you and want an autograph or a photograph, but that’s not a hassle for me. It’s something I enjoy and I always enjoy meeting fans, so it’s not a problem at all in Sweden.”

There are always distractions at home though, so in preparation for the next “biggest fight of his career” against Florida’s “Rumble,” Gustafsson made the trip back over to San Diego and the Alliance MMA gym.

“It’s good for me to get away, not only from media and people recognizing me, but I can also get away from all the comforts of being at home with your family. It’s a way for me to focus to travel to San Diego. It’s also perfect with the time here. I’m fighting at early morning in Sweden, so it’s perfect for me to be here with the time change and everything. And I’m training with the best guys in the world here, and I’ve got two guys from my team with me, so it’s perfect.”

There was no snow in San Diego either, a luxury not afforded to “The Mauler” this week in Stockholm, but nothing really rattles the 6-foot-5 Gustafsson, currently the number one contender to Jon Jones’ UFC light heavyweight title. A win over Johnson would secure a rematch with the champ, one he was expected to get last September before an injury took him out of the fight, which eventually went to Daniel Cormier. It was a crushing blow to the 28-year-old at the time, but when you ask him about 2014 now, he doesn’t write it off as a bad year.

“There were some ups and downs, but mainly it was good for me,” he said. “I had one fight (against Jimi Manuwa in March), I won that fight, and then I had a great summer. I started training for the fight (with Jones), then I got injured and I was working on that for a while, then I got back to the gym and continued working and training. I stayed positive knowing that I was getting better with my skills, getting better as a fighter overall, and that’s what I’ve been focusing on. And then when I heard about the fight (with Johnson), I was very happy about that and everything has been easy since then. Now I’m just looking forward to the fight.”

It’s a fight that will headline the second-biggest event in UFC history following UFC 129 in Toronto in 2011, yet again, Gustafsson is unflappable, laughing when asked if he had ever witnessed a soccer game or concert in the Tele2.

“This is the first time, and I’m in the middle of it.”

He is, but when talking about pressure and expectations and all the things that happen outside the Octagon that can affect what goes on inside it, he is quick to explain how he remains Alexander Gustaffson and not Alexander Gustafsson, UFC star.

“I just try to think to myself and tell myself that at the end of the day, I do what I love to do and that just makes everything easier for me.”

Things may change by Sunday morning and throughout 2015 though. A win over Johnson gets him another title fight with Jones, he wins that and he’s a world champion, and nothing will ever be the same again. That’s okay with him.

“That’s what I’m looking for and that’s what I want,” he said. “I don’t want anything else. So I’m down with that.”