Alexander Gustafsson: 'A Beast Is Coming'

After Contemplating Retirement, The 35-Year-Old Alexander Gustafsson Returns Fully Committed To Getting His Hand Raised On July 23
By E. Spencer Kyte, on Twitter @spencerkyte • Jul. 20, 2022

When Alexander Gustafsson announced his retirement following his loss to Anthony Smith at home in Stockholm, it was an unplanned, abrupt departure fueled by disappointment and frustration; feelings that still linger today when the subject is broached.

“That was three years ago, and I’m still fighting,” Gustafsson said in a sharp, curt tone on Wednesday morning, just a few days prior to facing Nikita Krylov on the main card of Saturday’s fight card at The O2 Arena in London. “It was very emotional. I had a pretty tough loss with Smith because I made a mistake in the fourth round — I was winning the fight — and I just said it.

“I didn’t put so much thought into it, and a week after the fight I was back in the gym.” 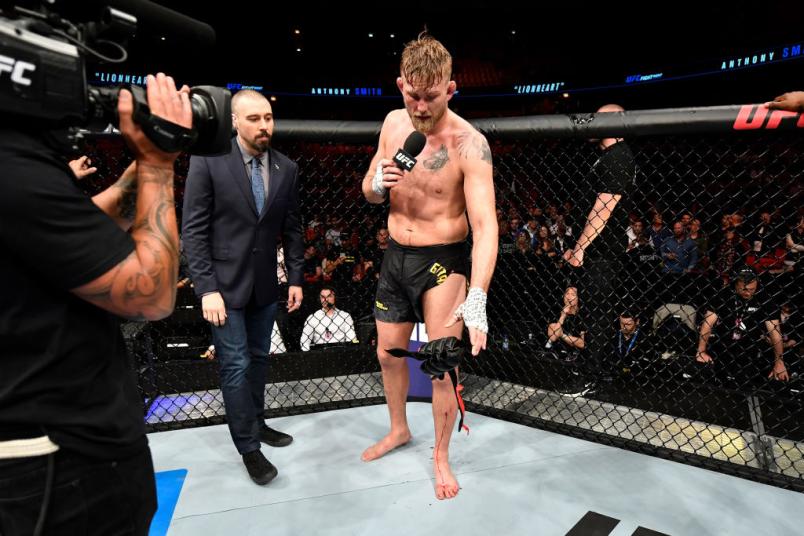 STOCKHOLM, SWEDEN - JUNE 01: Alexander Gustafsson of Sweden announces his retirement after his loss to Anthony Smith in their light heavyweight bout during the UFC Fight Night event at Ericsson Globe on June 1, 2019 in Stockholm, Sweden. (Photo by Jeff Bottari/Zuffa LLC)

A little more than a year later, the Swedish standout returned to the Octagon, venturing to Fight Island and competing at heavyweight against former champion Fabricio Werdum. Midway through the opening stanza, Gustafsson tapped to armbar that extended his losing streak to three and once again sent the three-time light heavyweight title challenger to the sidelines to contemplate his future.

While he finally makes his return this weekend, the 35-year-old’s intention to return has been clear for much of the two years that he’s been away.

He was booked to face Paul Craig, who competes this weekend in London against Volkan Oezdemir, in early September last year, but was forced to withdraw a week before the fight due to an undisclosed injury. Earlier this year, Gustafsson was booked for another heavyweight engagement, this time opposite veteran Ben Rothwell, but the bout collapsed in March when Rothwell was released by the promotion.

“It’s two years since I fought, and I’ve been training the whole time,” said Gustafsson, who continues to train at Allstars Training Center, which has once again moved into the spotlight thanks to the exploits of emerging welterweight star Khamzat Chimaev. “I’ve been battling some back issues and stuff, and some other factors, but I always wanted to come back and compete.

“There was the Paul (Craig) fight that didn’t work out because I had my back and s***, but there is nothing more to it,” he added. “I’ve been training and wanted to fight. There were reasons why I hadn’t, but now we’re here, and I’m excited.” 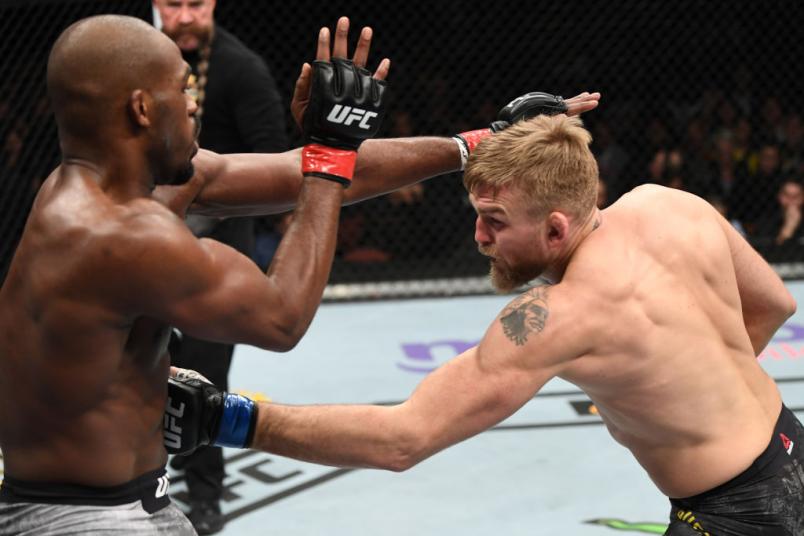 INGLEWOOD, CA - DECEMBER 29: (R-L) Alexander Gustafsson of Sweden punches Jon Jones in their light heavyweight bout during the UFC 232 event inside The Forum on December 29, 2018 in Inglewood, California. (Photo by Josh Hedges/Zuffa LLC)

When some competitors say they’re excited, the words seem to vibrate, the energy they’re carrying in their body in advance of stepping into the Octagon pulsating through their voice and their being.

It’s a little more difficult to discern just how amped up the Scandinavian veteran is ahead of Saturday’s clash with Krylov because good, bad, or otherwise, Gustafsson always maintains an even keel and tempered tone, but the way he’s approaching this weekend paints a picture of a man returning for the right reasons.

“This is what drives me,” he said when asked about his motivations for finally ending his hiatus and stepping in with Krylov, who enters on a two-fight skid and stationed at No. 11 in the light heavyweight rankings. “The feeling of fighting and competing, beating someone up, being in the Octagon is what drives me.

“Otherwise, I wouldn’t be here.”

Gustafsson has a unique legacy in the sport, having helped bring the UFC to Sweden for the first time during his rise up the light heavyweight ranks, and he challenged for championship gold on three separate occasions.

One of those bouts — his epic clash with Jon Jones at UFC 165 in Toronto — is already in the UFC Hall of Fame, and his bout with Daniel Cormier two years later at UFC 192 in Houston was an instant classic, as well.

He’s had great moments, and his two most recent victories came against men that have held the light heavyweight title within the last year, Jan Blachowicz and Glover Teixeira, yet he’s also just 3-6 dating back to that first meeting with Jones, and he hasn’t won a fight since his fifth-round stoppage win over Teixeira five years ago in Stockholm.

Many will suggest that Gustafsson is coming back in hopes of making one last run at the title that has eluded him thus far, but according to “The Mauler,” the only thing he’s thinking about is stepping into the Octagon on Saturday and getting his hand raised.

“It’s only winning this fight; that’s it,” said Gustafsson, doubling down on his single-minded focus as he returns to the Octagon. “Beating Krylov — beating him real well on Saturday, and get my hand raised; that’s the fire in me right now. That’s what keeps my motivation up and makes me do my best every day in training.” 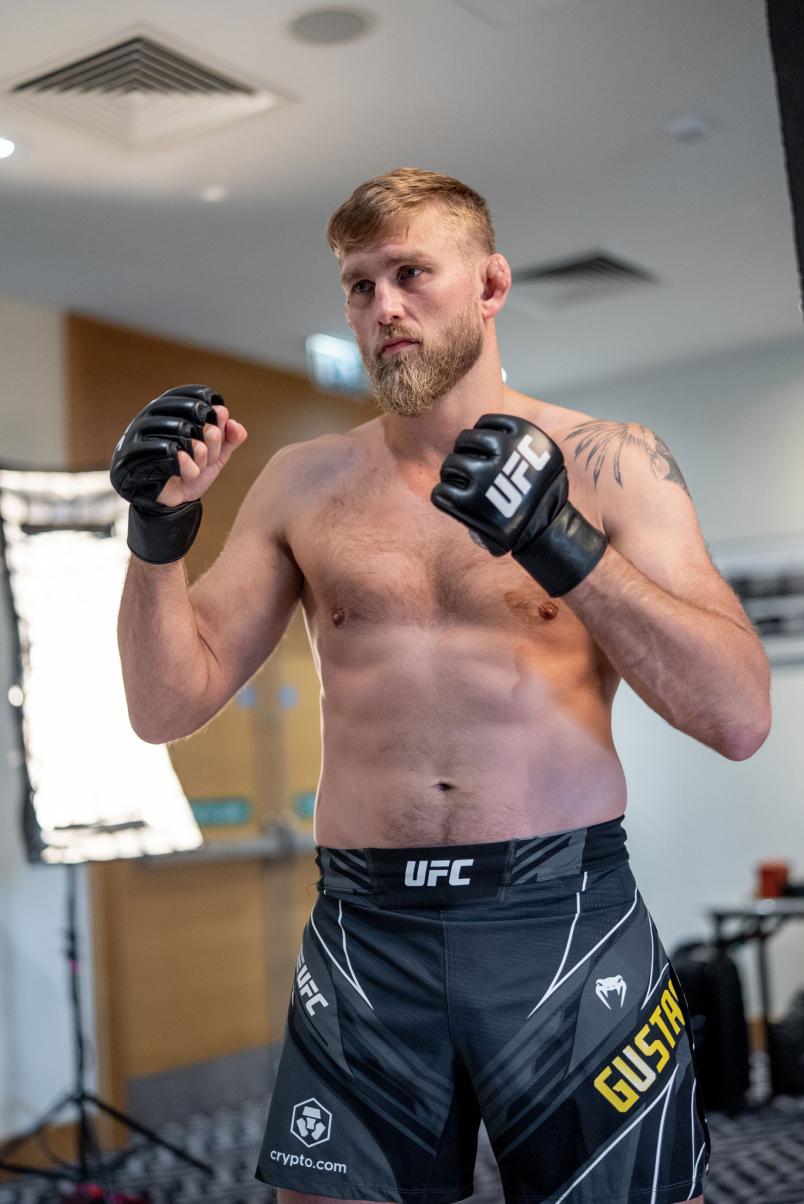 Alexander Gustafsson poses for a photo in London, England, on July 20, 2022. (Photo by Maddie Roth/Zuffa LLC)

And being in a room with the likes of the aforementioned Chimaev has certainly contributed to Gustafsson’s feeling that he’s still got more to offer and a drive to compete.

“It pushes me a lot to keep up with the young guys,” he said of working alongside the cast at Allstars that includes Chimaev, fellow UFC London competitor Volkan Oezdemir, Dana White’s Contender Series grad Piera Rodriguez, and many others. “We beat each other up, I’m developing my game, and we’re pushing each other to the maximum in training, and I have no problem doing that.

“I feel good. I keep up — I know I keep up with the young guys, beat them up from time-to-time, and that’s enough for me.”

It’s good enough to get him to this point — the eve of his return to action — but he certainly wants to more than just keep up with Krylov this weekend.

“I’ve felt it several times — getting my hand raised — and I know how it feels,” said Gustafsson. “That’s what drives me. That’s the motivation right there.”

So, after two years on the sidelines, what can fans expect when the 35-year-old crosses the threshold into the Octagon on Saturday night in London?

“A beast that is coming for that W,” he said sharply. “I’m gonna go in there and it’s gonna be explosive.”