Alexa Grasso Is Primed For A Fight

After over a year away, the ninth-ranked 125-pound contender makes her return to the Octagon this Saturday at UFC Fight Night: Blaydes vs Daukaus.
By Miguel Navarro III • Mar. 25, 2022

In the life of a professional fighter, the threat of sustaining an injury during practice or even in day-to-day life is constantly looming.

There isn’t an easy way, or trick, to getting prepared for being punched, elbowed, and possibly kicked in the face for 15 minutes. Even in training, the fight game has its consequences. In a sport that’s so physically demanding, you just have to hope your body cooperates with what you have intended. But it’s never that easy.

It’s an unpredictable sport with a lot of ups, and a lot of downs. Often, these things are just simply out of a fighter’s control. They must accept things for how they are and adjust to whatever comes at them. That’s been the story for Alexa Grasso this past year. 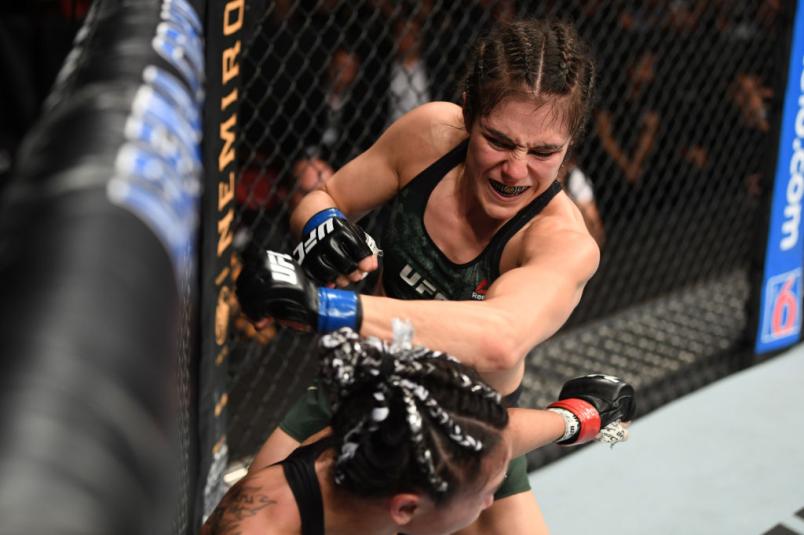 After defeating Maycee Barber at UFC 258 in February 2021, Grasso was scheduled to take on Scotland’s Joanne Wood later that year. However, an injury forced Grasso to pull out of the fight. As soon as the Mexican fighter’s injuries healed, she agreed to fight Viviane Araújo at UFC 270 in January of 2022. Suffering the same fate as Grasso, Araújo was forced to pull out of the bout due to injury.

Once again, the fight was out of Grasso’s hands. That much time away from the Octagon is never ideal for a fighter. As fighters typically like to fight two to three times a year, this wasn’t necessarily what she had envisioned for her run in the 125-pound division. Regardless, the move up in weight was crucial to Grasso finding success inside, and outside, the cage.

“We all have a vision of a path,” Grasso explained. “Sometimes things work and sometimes they don’t. Moving to 125 pounds has helped me so much. It’s really different because when I was 26, I felt that my body had changed a little. It was really hard to make 115 pounds. Making this move was a good decision.”

A professional athlete has to trust the process. But once reaching new levels, that process can become frustrating and daunting. And if those emotions show up in a fight, you’re already mentally compromised.

After losing a decision to former strawweight champion Carla Esparza, and having issues with weight cuts, Grasso decided that it was time to strengthen her mind by hiring a mental coach. Hiring a mental coach has become a more common thing in professional sports these days. It’s been a great way for athletes to deal with the anxieties that come with the job, but most importantly, it’s been a great tool to help build confidence. 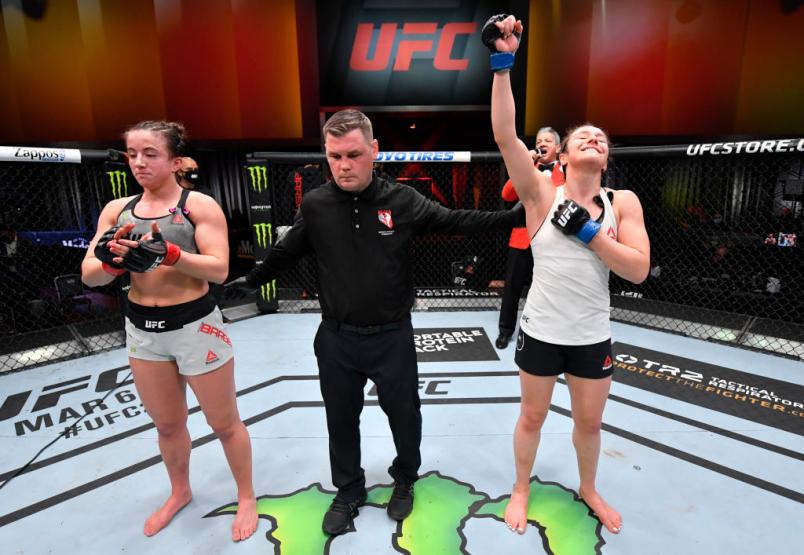 Alexa Grasso of Mexico reacts after her victory over Maycee Barber in their flyweight fight during the UFC 258 event at UFC APEX on February 13, 2021 in Las Vegas, Nevada. (Photo by Jeff Bottari/Zuffa LLC)

“I have a mental coach who teaches me how to train the mind. I imagine every time I’m going to fight, and how it’s going to be. I imagine the place, the people, the noise, the corner, everything! Every time, I’m trying to live that moment before fighting and how I want it to be.”

Visualizing and speaking these moments into existence is a major key to confidence when it comes to fighting. There’s the old saying that if you think about losing, then you’ve already lost. Grasso is taking the opposite approach. She’s growing her confidence and reinforcing the idea that she can accomplish anything she puts her mind to. One exercise Grasso regularly does now is listen to audio books.

“I also have some audio books that I use for sleeping, to wake up, when I’m feeling injured, and some others for health. We have different kinds of exercises, but it’s mostly audio. It’s all in your mind like, ‘You’re good, you can do it!’ It’s good to always be reminded that you can always achieve what you want.”

Grasso couldn’t be more right. It really is important to have that practice of self-belief drilled the same number of times you would for any other martial art. The mind is a muscle, and you can’t be a world champion without a strong mindset. It’s clear now that after securing back-to-back wins in the 125-pound division, the changes Grasso has made in her life are working. No longer having to worry about the weight cut to 115 pounds, Grasso is able to train and prepare with a clearer head. 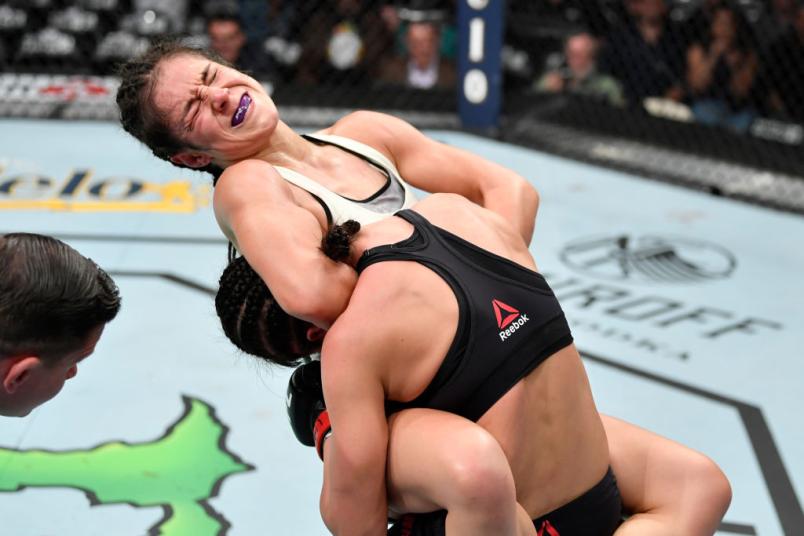 Alexa Grasso of Mexico attempts to submit Karolina Kowalkiewicz of Poland in their women's strawweight bout during the UFC 238 event at the United Center on June 8, 2019 in Chicago, Illinois. (Photo by Jeff Bottari/Zuffa LLC)

This Saturday in Columbus, Ohio at UFC Fight Night: Blaydes vs Daukaus, Grasso will finally get her fight against Joanne Wood. This time, though, the Mexican striker is more confident than ever. While she may not have made an appearance in over a year, Grasso has been training year-round, sharpening her mind, boxing, and jiu-jitsu skills.

Well aware of the position her opponent is in, Grasso is expecting Wood’s best on fight night.

“I know that she’s not a good place right now, so that’s why I’m taking this very seriously. I know she’s dangerous and has a lot of experience. She needs the win. I’m expecting the best version of her, and I’m ready for that.”

With a win this Saturday over Wood, Grasso will be looking to build off the momentum she currently has in the division. But if there’s anything Alexa Grasso has come to learn over the past year, it’s that you can only control so much of your future. The only thing she can do now is find trust in those words of affirmation, and fully believe in her abilities to get the job done.