Ten years ago, Alex Perez started training for a dream. But as he hopes to get another step closer to that dream by defeating Jussier Formiga on this Saturday’s UFC 250 card in Las Vegas, he’s not getting too sentimental.

“It's just another day,” he said when asked about any celebrations for the 10th anniversary of the beginning of his MMA journey. “It reminds me of how old I am.”

Perez is then reminded that he is still only 28 years old.

He laughs, and while the chronological age is young, inside, Perez is an old soul, one who embraces the idea that the best talking is done by his performances, and that to really talk loud, it takes hard work. So when the COVID-19 pandemic hit earlier this year, he continued to train, no matter how he had to get that work in.

“I don't get paid to sit on the couch,” he said. “I knew eventually the UFC was gonna be the first one to start fights, so you've always got to be in shape to take a fight. Although training's not the same, there are things you can do on your own, whether it's running, hitting pads, things like that. Everybody knows somebody around, so I just kept training.” 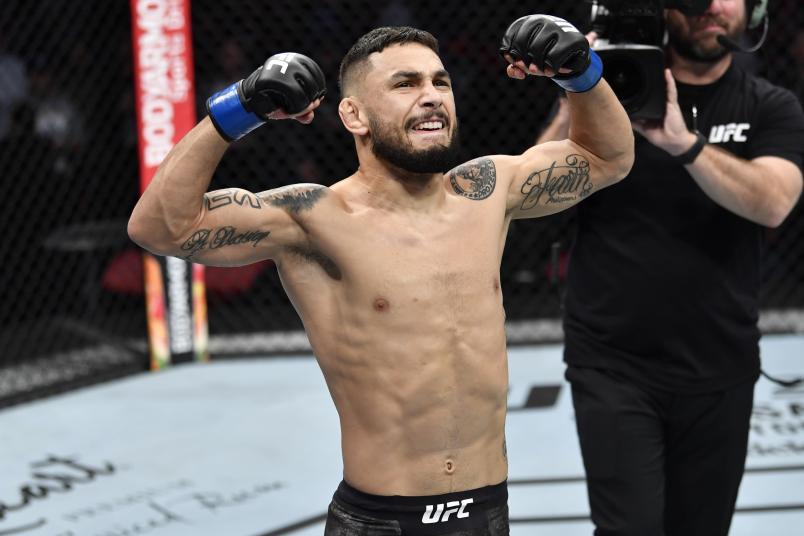 It’s a throwback to his early years in the sport, when the former college wrestler wasn’t exactly finding MMA gyms on every corner in Lemoore, California. So he had to improvise.

“A lot of people don't know, but I used to train in a garage, and I was 9-2 as a pro,” he said. “So I went back to that kind of training (during the quarantine). Everybody's under different circumstances. I know some people don't even have gyms to train at. Some guys can't fight, some guys can't travel and get over here, but I feel like everybody could be doing something.”

Once restrictions started easing up, Perez settled into a more normal groove, but that doesn’t mean this is going to be a normal fight with a roaring crowd. Again, you won’t see Perez getting rattled by having to work outside of the box.

“Coming from the time I did - I started training MMA in 2010, turned pro in 2011 - and seeing all the crazy stuff, I fought in venues where there was only like ten people, so no audience is going to be about the same,” he said. “And training in the garage brings out the old school. Where I'm from, there weren't a lot of MMA schools around, so we matted up the garage and did our thing there.”

Oddly enough, it was around this time that he met Formiga, who was a fellow standout fighting in Tachi Palace shows, and the two struck up a friendship that remains today. Obviously, neither had an issue taking this fight.

“We're friends, but I never turn down a fight and I've got no problem punching a friend in the face,” Perez said. “I've done that a bunch of times before. So when they offered me the fight, I was excited. I get to show the world how much I've improved.”

And we’ve seen it in both MMA and boxing that sometimes when friends get matched up, the ensuing fight is one to remember. I asked Perez why he thinks that is.

“Honestly, it's just business,” he said. “I think everybody knows that. You sign the contract to get paid and it's about trying to make money while you can. And if I say no, I'm just taking time away from my clock. I've only got a limited amount of time in this sport, so I'm not gonna waste it.”

There’s that age thing again from the guy who hasn’t even hit 30 yet. But there is a kid still left inside Perez. If you recall our last check-in with the flyweight contender in March, he was more than a little miffed that he couldn’t find cookie dough ice cream. So what’s the plan for the day after he and Formiga throw hands?

“I’m eating a big tub of cookie dough,” he laughs.