“I was pretty much willing to take whatever they were gonna offer."
By Thomas Gerbasi, on Twitter: @TGerbasi • Feb. 6, 2020

Just take a look at his weekly schedule to get ready for his Saturday bout against Michigan’s Khaos Williams.

“I'm in Fortis the beginning of every week and I hit my really hard days there,” said the Houston native of his trips to Dallas’ Fortis MMA gym. “I'll come home and take a rest day and then the last couple days of the week, I really just seek out the best guys around town.”

It’s not an easy process, but fighting at the UFC level isn’t easy, either, so he will prepare accordingly.

“I've probably had 35 fight camps in my life and I have been one hundred percent prepared 35 times,” he said. “I couldn't imagine guys not making the best decisions in training for these fights where you can get really hurt not doing it a hundred percent. It just doesn't compute with me. So in my off time, I like to stay sharp and especially work on the things that I could have done better when I was at Fortis. It's such a refined system of putting in hard work, making notes, fixing what I need to fix and then trying it again the next week.” 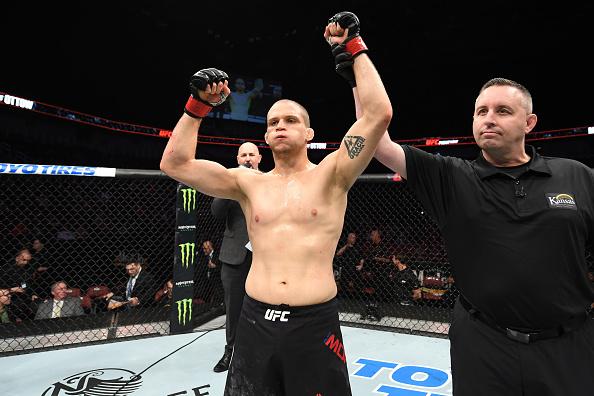 It’s working, especially since he began training with Sayif Saud and the Fortis MMA gang in 2018, and he’s got the three-fight winning streak to prove it.

“When I started training at Fortis MMA, I’ve had coach Sayif's guidance and leadership, and he makes everything very clear,” Morono said. “There's always a big motivation to not lose fights, but I didn't really have anyone to answer to other than myself before. Now, not only do I want to give back for the team and pull my weight and do my part by winning these fights, but I just want to make coach proud and really not let the team down. I haven't lost a fight since I've been with Fortis and I plan on keeping that streak alive until I retire, which will hopefully be in a few years, maybe ten more fights.”

See, he’s got it all down to a science and a concrete plan. He is open to some alterations along the way, though.

“I'm just kind of spacing it out,” Morono said. “I don't want to be one of those guys who fights haphazardly into my late 30s. I'm giving myself a good strong six years. When I started, the goal was 20 fights in the UFC. And if that happens sooner than later, I'll reassess and probably tack on another ten fights if I can. But I expect to give myself long-term goals so I'm not shooting in the dark.”

At the moment, Morono sits at nine UFC bouts, but after a trio of wins over Song Kenan, Zak Ottow and Max Griffin, he didn’t know if Octagon fight number 10 was going to come off this weekend when Dhiego Lima was forced out of the UFC 247 contest due to injury. And for a couple of days, Morono was not happy. 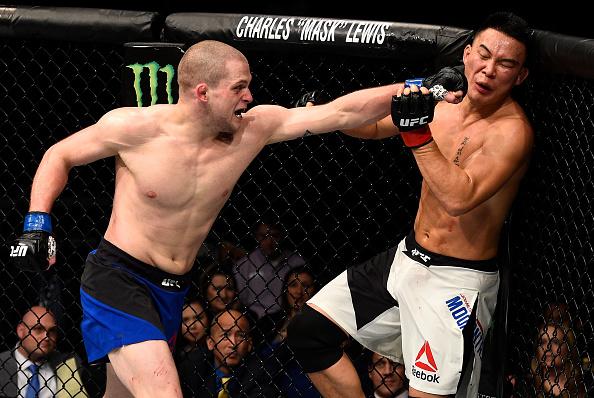 “I had a pretty horrible couple days,” he said. “It was just no fun. Especially being in Houston, I've got family flying in and they've spent money on tickets and everyone from the gym's going.”

It’s only the second time Morono has dealt with a last-minute opponent change in the UFC, and the first time wasn’t great.

“It was the exact same scenario,” he recalls. “I fought in Houston, two weeks' notice and the other guy pulls out. It was Sheldon Westcott, a really favorable matchup, and then I got a young, unknown Nico Price as a backup. That was no fun.”

Morono was knocked out by Price, and while the result was overturned to a no contest when Price tested positive for marijuana, the Texan knows just what can happen with a late change of opponent. But he’s ready for Williams, who is making his UFC debut by entering the lion’s den at Toyota Center.

“I was pretty much willing to take whatever they were gonna offer,” Morono said. “I checked my email every five minutes for two days, waiting for a message from (UFC matchmaker) Sean (Shelby). Thankfully everything came in pretty quick.”

And now he gets to fight at home for the first time since that bout, and he’s excited not just for the fight, but for the reduced level of logistical hurdles.

“The energy was amazing last time and it's almost indescribable,” he said of fighting in Houston. “It was such a fun feeling and a fun night. Plus, it's just really convenient not having to travel and stay in a hotel and struggle to find good, clean food. Everything about it is a lot more convenient and easier. Plus, it's on a pay-per-view, so that's really cool.”

Yeah, Alex Morono has it all figured out. Not bad for 29 years old.

“I've run my business and my gym in Houston, Gracie Barra The Woodlands, for a long time, and even when I was a younger adult in my early 20s, people would tell me all the time that they thought I was much older or that I had a good head on my shoulders,” he said. “I've always kind of operated that way and it always felt like normal life to me. I had great role models in my parents, especially my dad. He was always his own boss and a business owner, and it always felt normal. My oldest brother, he runs his own SEO and web design company. He's extraordinarily independently successful and it's been the way my family operates and it's always just felt normal and like regular life to me.”