Alex Morono Wants To Put On Show For His Dad

With His Dad Set To Be In The Audience At UFC Fight Night: Font vs Aldo, Alex Morono Is Aiming To Get A Knockout Victory.
By Gavin Porter, On Twitter @ItsGavinPorter • Dec. 2, 2021

When Alex Morono was 15 years old, he used to watch UFC fights with his father. Little did his dad know that having a shared interest in mixed martial arts inspired Morono to pursue a career in the fight game.

“I don’t think he really knew how important that was to me,” Morono told UFC.com. “It really gave me the drive and motivation and enthusiasm to one, train, and two, compete. Now to be in the UFC is so amazing.”

Morono’s dad came to his UFC debut back in 2016 and will be attending his son’s fight against Mickey Gall this weekend inside the UFC APEX.

“This is likely my dad’s last time traveling and his last time watching me fight live,” Morono said. “He’s getting to that age where it’s just more difficult to do certain things and we are very grateful to the UFC for working with our situation and making sure he could be there to watch me fight this weekend.”

“Result aside, for him to be there with me for the fight is very special.”

With his dad in the audience, likely for the last time, you can bet Morono is dialed in and ready to deliver his best performance to date. Morono enters his UFC Fight Night: Font vs Aldo bout versus Gall on a two-fight win streak and is excited to put an exclamation point on one of the best years of his career. 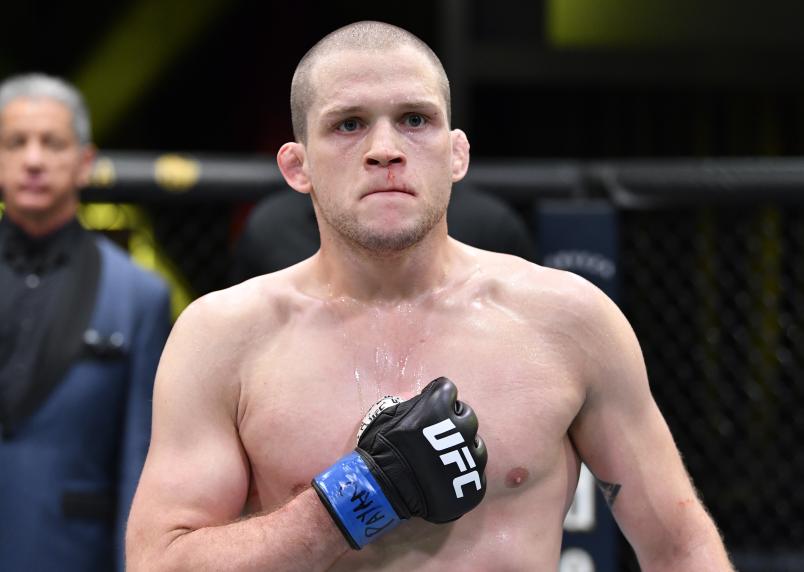 Morono’s willingness to take short-notice fights landed him a fight with Donald Cerrone. The fight couldn’t have gone better for Morono, who made a statement by knocking out “Cowboy” in the first round on his way to a Performance of the Night bonus. Morono doubled down on short-notice bouts just a few months later when he defeated David Zawada on a week’s notice.

“Fighting Cowboy and getting the finish and the bonus was the best possible way I could have started the year and it was all in like a week’s notice,” Morono said. “The second fight was like a two-week notice fight and I had another victory there. In both fights I barely got my face touched at all, so I was right back in the training room.”

This time, Morono wanted a full camp. He wanted to put himself into true fight shape and then get back into the Octagon. So when Morono entered fight camp, which he splits between Gracie Barra The Woodlands and Fortis MMA, he attacked strength and conditioning a little differently this time around, adding lean muscle and elevating his cardio to new heights.

As for an opponent, the name and body wasn’t something that “The Great White” concerned himself with.

Enter Mickey Gall. The 29-year-old New Jersey native has quite literally cut his teeth in the MMA game as a member of the UFC roster. Gall made his UFC debut with only one professional fight on his record and has since gone 6-3 inside the Octagon, including an impressive submission victory over Jordan Williams in his last trip.

Morono knows that he’s the more seasoned fighter (20-7 as a pro), but he’s expecting Gall to not only be well prepared, but for him to bring his A-game on fight night.

“Mickey Gall has a decent name behind him,” Morono said. “He’s a black belt and beating a fellow black belt would be a feather in the cap. I was just happy to really take any fight, but this fight, in particular, for sure.

“He’s looked really sharp in his last few fights, especially his last fight. He’s definitely a guy I could see people kind of underestimating, but I’ve never done that.”

Morono sees the fight playing out a few different ways, but if he’s being honest, he’s hoping for a specific outcome.

“Any finish is what I’m always looking for, ideally later in the fight. I really enjoy being in the Octagon and really like the Octagon time, plus, deep water finishes are always fun because you get your experience, and you get to feel all the fun feelings of damage, fatigue and blood in a fight,” Morono said. “Finishes are always the way to go, especially a knockout.” 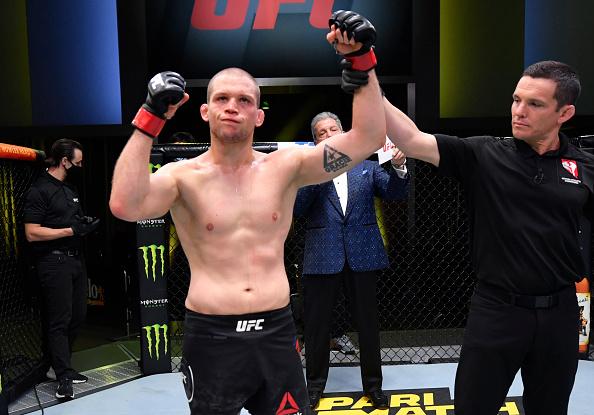 Alex Morono reacts after his victory over Rhys McKee of Northern Ireland in a welterweight fight during the UFC Fight Night event at UFC APEX on November 14, 2020 in Las Vegas, Nevada. (Photo by Jeff Bottari/Zuffa LLC)

Knocking out Gall with his dad sitting just feet away in the audience would be something that Morono would never forget. He’s been visualizing sharing that moment of victory with the person that helped him build his passion for mixed martial arts for years.

All that’s left to do is to go out and make it happen.

“Any Dads out there that do watch he fights with their sons, you may not know, but it means more to them than you could ever imagine,” Morono said. “I’m happy to be giving a performance in front of the world, the UFC and especially my father.”