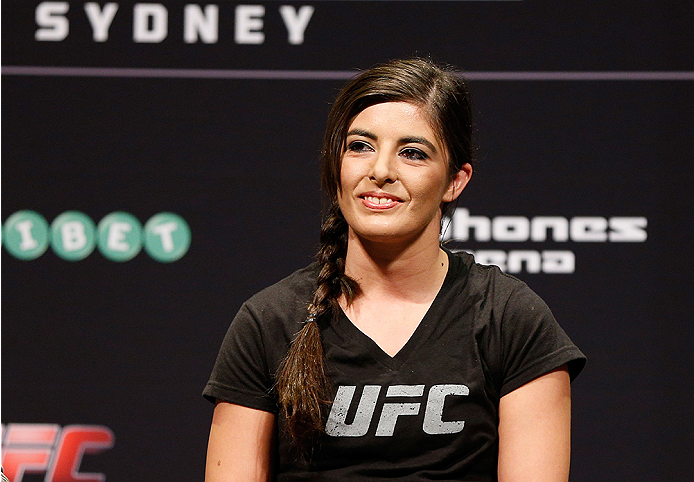 As a fierce rival of middleweight Mark Munoz for the pound-for-pound nicest fighter in the UFC crown, it’s really no surprise that Sydney’s Alex Chambers not only emerged unscathed from season 20 of The Ultimate Fighter when it came to in-house drama, but that she admits she would do it all again with no hesitation.

“I really enjoyed the experience,” she said of her run on the first all-female season of TUF. “It was a once in a lifetime thing, and I’m really glad to have been a part of something like that. I think I’m one of the only girls that have said I would do it again. (Laughs) I had a good time and made some good friends, and it was such a great thing to be a part of.”

She may be one of the only fighters, male or female, to say they would go through the reality show ringer a second time.

“I’m sure there are a few weirdos out there like me.”

That’s the kind of weird we can get used to, especially since a lot of the talk emerging from TUF 20 wasn’t about the high level of strawweight talent on display, but about who hated who and who wasn’t in the clique with this or that one. And it was no act from Chambers, who is entering her second fight in the UFC against Kailin Curran on Saturday (Sunday Australian time) with precious little drama, outside of who’s going to win the pivotal bout for both.

“I can understand creating hype – it sells fights, and you’ve got to sell fights,” she said. “But it’s not something in my temperament or my character. You asked where I think it comes from, and I don’t know. Perhaps it’s the fact that martial arts has been a lifelong thing for me. I started off in karate when I was eight, and it might stem from that, from the discipline and etiquette and those values that traditional martial arts instilled in me from the beginning. So creating drama with your opponent, I just don’t think it’s necessary. We’re both going to get in the cage and give it out all, no matter what.”

A five-year pro with a lot more experience in MMA than her 4-2 pro record would represent, Chambers is a black belt in karate and purple belt in Brazilian Jiu-Jitsu, but the main obstacle apparently facing her in the women’s strawweight division is her size. The physical difference between Chambers and her first Octagon opponent, Aisling Daly, was evident in their December bout, but “Astro Girl” is quick to give her former TUF 20 castmate credit for her technique, and not her size advantage.

“Aisling was just the better fighter on the ground,” Chambers said. “She’s one of the best groundfighters in the whole division and she used that to dominate me in the fight. I escaped a few times and got back up to my feet, but she’s got some sneaky things she does on the ground, some really advanced things, and I was caught.”

It’s a classy response, but is the 36-year-old concerned that as a former 105-pound atomweight, she may be giving up too much to bigger 115-pounders?

“I’ve actually been walking around heavier since that fight, and I’ve been feeling good, so it’s never been a question whether I can handle the 115 division,” she said. “I trained with the 115 girls on The Ultimate Fighter and I felt good training with them. I’m always going to be one of the smallest girls in the division, but I have the speed and footwork that can work in my favor.”

She’s also in an interesting spot, considering that she’s not the only strawweight who first made her name at 105 pounds. Future world title challenger Jessica Penne competed at atomweight before The Ultimate Fighter, and the woman who beat her for the Invicta FC 105-pound crown, Michelle Waterson, is a recent addition to the UFC roster. Could this mean the addition of a new weight class in the UFC one of these days?

“I definitely see a day where they bring in the atomweight division,” Chambers said. “It’s just a question of when. It’s good to see some of the atomweight girls representing in the 115-pound division, particularly seeing Jessica Penne as the number one contender fighting for the title soon. Of course if they introduced the atomweight division, it’s a division I perhaps would be better suited for, but I do feel good right now, so whatever happens happens. I’m just going with the flow of things.”

And that attitude has brought her back to Australia, where she will fight for the first time since 2012. That’s a big deal in itself; to do it as a UFC fighter is even bigger for Chambers.

“I never thought that I would be fighting for the UFC in my home country,” she said. “That’s pretty awesome. I’ve never lost a fight in Australia (3-0), so I’m looking at keeping that going. I do enjoy traveling and fighting overseas – it’s a cool thing – but I definitely don’t miss the whole jetlag thing, so I’m really happy about that. It’s sometimes a difficult thing to cope with, that long travel overseas, and this is a two-hour flight (from Sydney to Adelaide), so I’m going to be ready.”

“It’s a fight,” Chambers said. “I’m coming off a loss, she’s coming off a loss and I’m really determined to get that win, and I’m sure she’s the same, so we’re gonna leave it all in there and whatever happens happens.”