"It’s just another day at the office. I just want to get in there and do it." - Alex Caceres 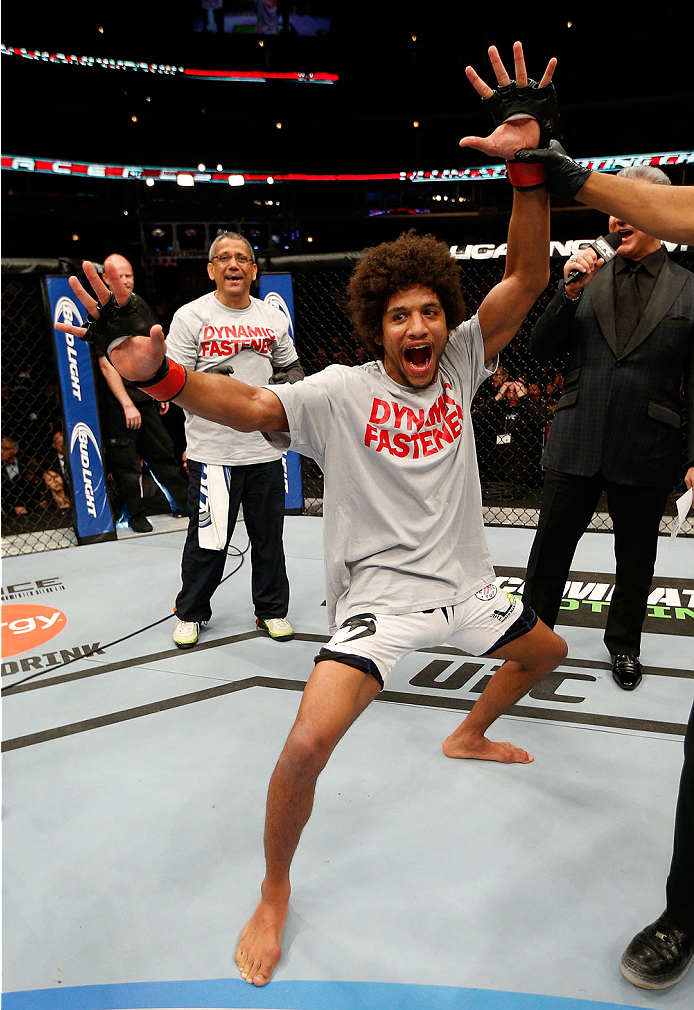 You don’t often get what you ask for in this world. Yet Alex Caceres knows that if you don’t at least ask, you’ll really be left in the cold. So when he found out that top bantamweight contender Urijah Faber was looking for someone to fight on his week’s UFC 175 card in Las Vegas, he figured he had as much right as anyone to ask for the bout, given his five-fight Octagon unbeaten streak.

Lo and behold, he got what he asked for. It didn’t surprise him that things turned out in his favor, but he was happy about it.

“I was excited,” he said. “They were saying that Urijah Faber needed an opponent and there was nobody ready to fight Urijah at the moment, so I figured that if I asked for it, I had a very good chance of getting it.”

It was a gutsy move, but as the old saying goes, “who dares wins,” and Caceres has never been shy about taking the road less traveled. It’s why - despite being seen by naysayers as a young man who just wanted to be in front of the cameras following his stint on season 12 of The Ultimate Fighter in 2010 - he took the slow and steady route to this moment in his career, doing it largely on the outskirts of the media glare, keeping his social media presence fairly low while honing his craft in the gym.

“If you go on Instagram, Facebook, or Twitter, the amount of selfies that you must endure is just ridiculous,” laughs Caceres. “How full of yourself can you be? Let me take the same picture five thousand times from five thousand different angles. It just doesn’t make sense. That’s just not my scene. I’d rather post stuff that gets your mind working and that makes you think. I like posting those things that I find interesting. I honestly don’t find my body that interesting that I have to share it with the world.”

That’s not the statement you would have expected to hear when Caceres came off TUF 12. But four years is a long time, especially in the fight game, and while he’s still smiling and still enjoying his life in and out of the sport, at 26, he’s not the same “Bruce Leeroy” he was back then.

“Everybody has this misconception that success is a straight path,” he said. “But it’s a zigzag between a thousand different failures until you get there. It’s like trial and error, knocking your head on the same wall until you break through or go around it, under or over it, and find a way through that maze. People think I just wanted to be on TV, and that’s a whole misconception too because if they would have seen me in my local fights before I even got to the UFC or on The Ultimate Fighter, I was just as excited, just as animated walking out to the cage, and just as animated during the fight because I was getting to do what I love to do.”

He recalls an early fight where he got cut by his opponent. In a homage to his hero, Bruce Lee, he reenacted a moment from one of The Dragon’s films.

“I thought it would be really cool to touch my eyebrow and lick the blood like Bruce Lee did in one of his movies,” he laughs. “I just like to have fun out there. It’s one of those rare things where we can actually be ourselves.”

And as he’s grown and continued being himself, he’s also turned into a pretty successful prizefighter. Stumbling out of the gate in the UFC with a 1-3 record in his first four fights, which began at featherweight and then saw him move to bantamweight, Caceres began to turn things around with a win over Damacio Page in July of 2012 that saw him win Submission of the Night honors. He fought and won in Asia against Motonobu Tezuka and Kyung Ho Kang, the latter result getting overturned to a no contest when Caceres tested positive for marijuana, and in his last two fights he won a split decision over Roland Delorme and pulled off a come from behind win over previously unbeaten Sergio Pettis that won him Submission and Fight of the Night awards. That’s five fights and nearly two years in the UFC without a loss. You don’t see that too often.

It’s a mature attitude to say the least, and the proof is in his performances over the last couple years. But if you’re still not convinced, his thoughts on the work he does in the MMA Lab gym in Arizona should sway you to the other side.

“I know I have to hit it hard every day when I come to the gym, and not only that, a lot of people depend on you, such as training partners, teammates, and coaches,” he said. “They’re depending on you to do well, and they give all their time, and all their effort and energy so that you can perform well, so you’ve got to give it back by showing them that you’re going to perform well, and not only that, but you’re going to put 110 percent into the gym, and you’re not going to waste their time, let alone your own.”

With the zigzagging path starting to straighten, and his performances starting to catch up to his potential, the big question is, can he beat Faber on the biggest stage he’s been on yet? He knows it won’t be easy.

“It’s gonna be a tough one,” he said, “but I always try to look at every fight as the most important fight of my career. So far I’ve been going up the ranks and fighting tougher and tougher guys. You can say there’s some importance to this fight, but if I had to say personally, it doesn’t really matter. It’s just another day at the office. I just want to get in there and do it.”

So it doesn’t feel different than the others?

“Not necessarily. Camp went well, we trained really hard, I feel like I’m in a lot better shape for this fight than any other fight I’ve been in, and I’m always trying to get better, so, if anything, I feel really good for this fight. It doesn’t feel any different, nothing’s changed – just the opponent.”

That calm under pressure is something all fighters wish they had, but if you ask Caceres about it, he’ll explain that the way he approaches this, the end result isn’t as important as the journey to that result. To some, that may sound like he’s accepting losing if that’s the way the fight goes, but that’s not what the Floridian is getting at in the slightest. Sure, he doesn’t judge his life by wins or losses, but on the way to that final verdict, he will fight you harder than any opponent ever has.

And he’ll smile while doing it.

“Winning and losing is not so big of a deal to me,” he said. “I know there are only two people in there and that one person’s going to have to lose and one’s going to have to win. But I guess the biggest difference is, I love doing this so much that for 15 minutes or for as much time as I’m going to be in there, I’m going to fight my opponent tooth and nail to the end. I’m not going to go into the night quietly. For every little inch, I’m going to fight him on it. Every little turn, movement, or punch, I want to fight him on it. And I know performing that way, it could very possibly lead me to victory, but that’s not my main concern. My main concern is making every single second count.”