Aleksei Oleinik Is Fighting For His Family And Legacy

Aleksei Oleinik has been competing in mixed martial arts since 1996, amassing a 59-16-1 record, officially, as he heads into the Octagon this weekend to face Ilir Latifi.

I say “officially” because it’s quite possible there are other unofficial bouts that should count towards his record, but instead are known only as whispers and stories and vague recollections by the people who saw them take place.

The 44-year-old heavyweight is a grappling specialist, brandishing black belts in both Japanese jujitsu and Brazilian jiu jitsu, and earning 46 of his 59 career wins by submission, including an astonishing 14 finishes by Ezekiel choke.

With that kind of pedigree, with that type of history and experience and expertise, one might assume Oleinik was raised in a dojo, got an early start on his martial arts education, and always envisioned making a living competing on the mats, but that wasn’t the case.

“My favorite and first martial art was Japanese jujitsu; old school Japanese jujitsu,” said Oleinik, recounting his journey into martial arts on Wednesday morning. “I started coming to the gym for the first time at 19 years old."

“I was almost old,” he said, chuckling, as I scrambled for a pen in order to do some quick math.

Oleinik was born on June 25, 1977, and he started training in Japanese jujitsu when he was 19, which would have been 1996. He made his professional debut on November 10 of that same year, earning three victories in one evening to begin what has become more than a quarter century competing in mixed martial arts. 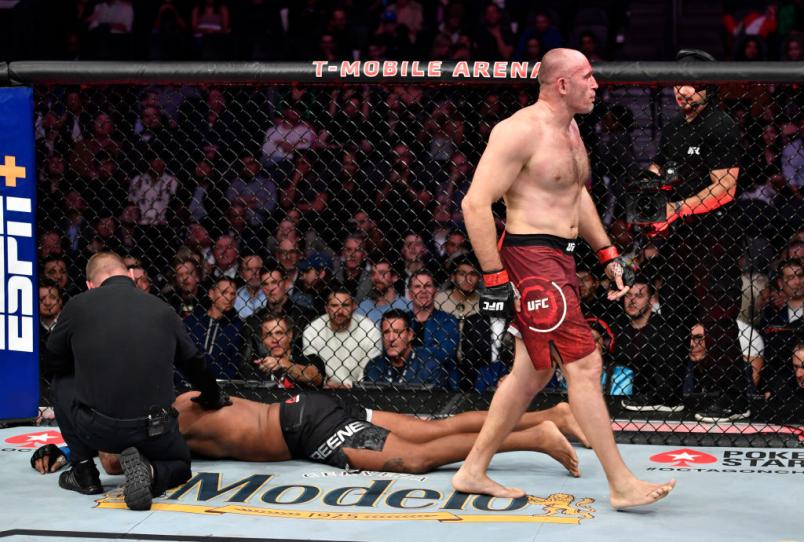 Aleksei Oleinik of Russia walks away after submitting Maurice Greene in their heavyweight fight during the UFC 246 event at T-Mobile Arena on January 18, 2020 in Las Vegas, Nevada. (Photo by Jeff Bottari/Zuffa LLC via Getty Images)

“Yeah, you’re absolutely right,” he said when I shared my timeline calculations with him, affirming that he started competing with very little training or experience. “My coach, my friends, everyone believed in me.

“I had a schedule and was training seven days a week. I trained a lot, like Bruce Lee in movies.”

Unlike many competitors today that grew up watching the UFC, dreaming of competing from an early age while being shepherded to classes by supportive parents and encouraged by a collection of coaches and teammates, Oleinik’s initial reasoning for stepping into that first Japanese jujitsu study wasn’t to chase a dream others had told him was possible or to find a profession. 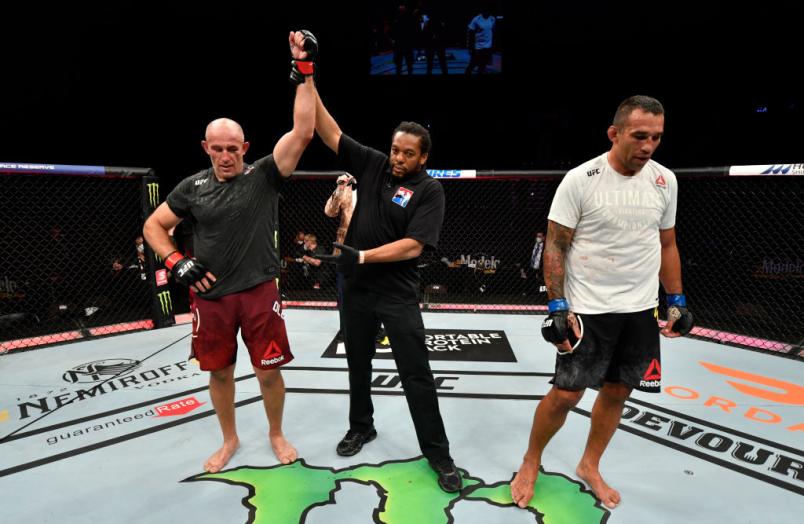 Aleksei Oleinik of Russia celebrates after his victory over Fabricio Werdum in their heavyweight fight during the UFC 249 event at VyStar Veterans Memorial Arena on May 09, 2020 in Jacksonville, Florida. (Photo by Jeff Bottari/Zuffa LLC)

“I wanted to be a strong man who could defend (myself against) anyone around and (make it so that) nobody could submit me; that was my first goal. When I trained for maybe 7-10 years, I understood I knew this profession better than any other professional in the world.”

Despite that personal understanding, Oleinik still didn’t envision martial arts as a professional pursuit, working various other jobs as he sharpened his skills on the canvas.

“For many years, I don’t think about this like my job,” said the veteran heavyweight, who made his UFC debut in June 2014 with a first-round submission win over Anthony Hamilton. “I have many other jobs: I worked as a lawyer, I worked as security, I worked agriculture, I worked with a combine machine, and many other professions. 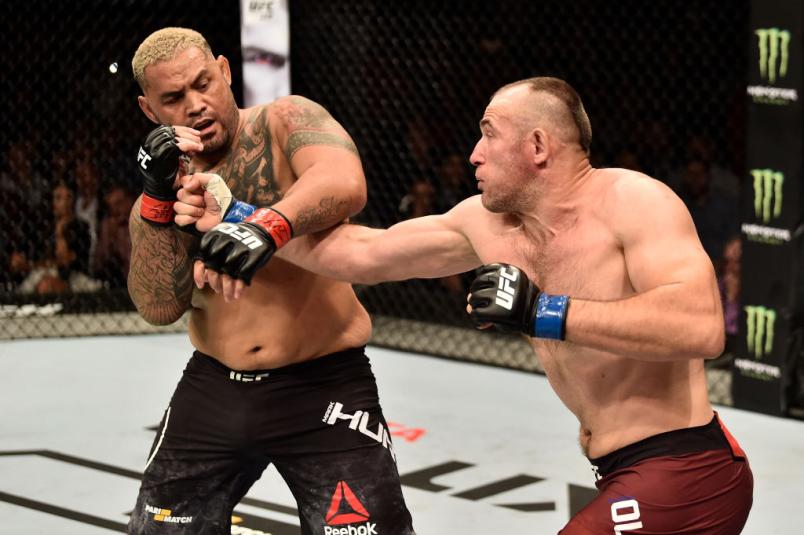 So what changed in 2007 that made him start thinking about mixed martial arts as a profession?

“I meet my wife in 2007; we met on a Russian television production,” explained Oleinik.
“When I met my wife, after this project, we chose our life.

“We thought, “We can do this, we can do this, or we can do this; what do you think?’ and we thought a lot about this. My wife said, ‘we can try to make this more your profession. Before you worked by yourself, and now we can do that together,’ and together we do this much better because we work like a team.”

And more than 14 years and five children later, the team is still going strong.

Now in the twilight of his career, it’s clear that Oleinik takes great pride in his craft and his abilities, finding joy in demonstrating moves to friends and people he’s introduced to that inquire about holds and moves. 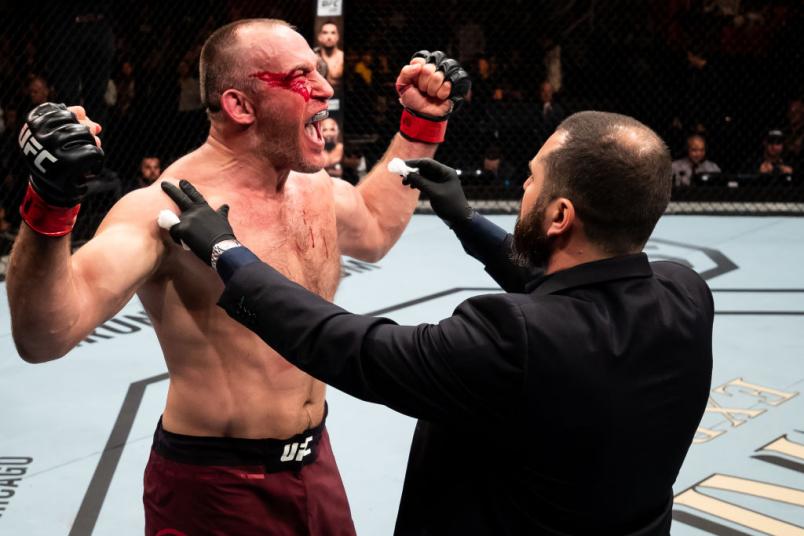 MAY 12: Aleksei Oleinik of Russia celebrates victory over Junior Albini of Brazil in their heavyweight bout during the UFC 224 event at Jeunesse Arena on May 12, 2018 in Rio de Janeiro, Brazil. (Photo by Buda Mendes/Zuffa LLC/Zuffa LLC)

And he still enjoys the daily grind of competing at the highest level, so much so that he no longer considers being a mixed martial artist his job, but his life.

“It’s not my job — it’s my life because I can’t have a fun time for three, six, 10 months where I don’t train, don’t think about my diet,” he told me last year ahead of his fight with Serghei Spivac. “All my life, all my time, I must think about what I drink now, what I eat now, what I’m doing tomorrow, what I need to support my physical and mental condition.

“This is not easy to be ready, be training for more than 20 years, but it depends on the time,” he added. “In my first years, I had one motivation. After, I had a second motivation, and now I have a different motivation because now I fight for my family and for my legacy, for my name.”

After more than 25 years and 76 fights (and counting), Oleinik has clearly established a legacy as a one-of-a-kind competitor and someone whose path and efforts will not soon be forgotten.