Aleksandar Rakic is ready to rise to contender status with a big win over Volkan Oezdemir at UFC Busan.
By E. Spencer Kyte, on Twitter @SpencerKyte • Dec. 18, 2019

Given the amount of attention that has been dedicated to finding new names in the light heavyweight division over the last few years, it’s surprising that Aleksandar Rakic isn’t entering his co-main event matchup against Volkan Oezdemir this weekend with more hype.

A perfect 4-0 inside the Octagon and the winner of a dozen straight overall, the 27-year-old from Austria profiles as the exact type of emerging fighter that usually gets fans and media all kinds of fired up. Last time out, Rakic dispatched British veteran Jimi Manuwa, sending him crashing to the canvas with a thunderous head kick just 42 seconds into the fight.

It was the type of electric finish that typically imbues a fighter with all kinds of momentum and buzz, but as Rakic readies to return, he remains somewhat under the radar in the light heavyweight ranks.

“This is only because I haven’t fought in the U.S. and the U.S. market didn’t see my last performance,” suggested Rakic, whose win over Manuwa took place in Stockholm, Sweden. 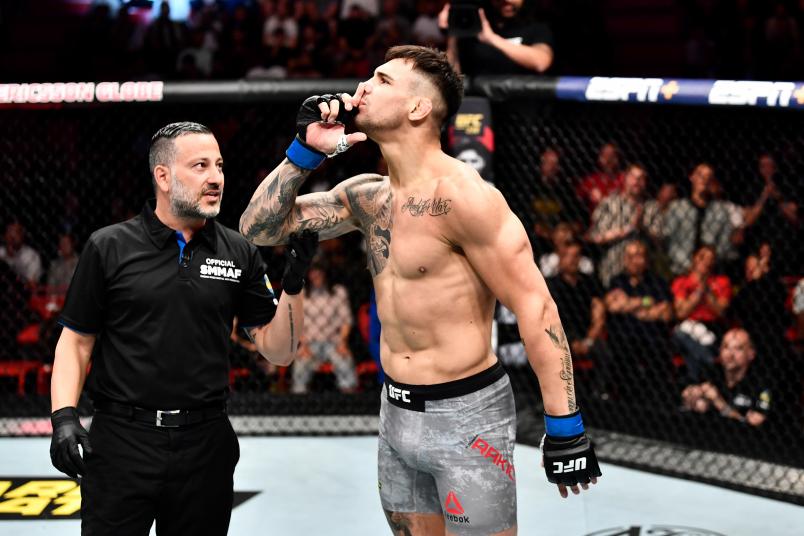 Aleksandar Rakic of Austria celebrates his KO victory over Jimi Manuwa of England in their light heavyweight bout during the UFC Fight Night event at Ericsson Globe on June 1, 2019 in Stockholm, Sweden. (Photo by Jeff Bottari/Zuffa LLC via Getty Images)

While some might scoff at the idea that competing primarily overseas makes it more difficult for an athlete to break through with the North American audience, a quick glance at how things have played out in the light heavyweight division this year shows there is merit to Rakic’s assessment.

After winning his first two fights in spectacular fashion in South America, Johnny Walker’s third Octagon appearance came at UFC 235 in Las Vegas, where he was a part of the preliminary card fights that aired on ESPN. Another rapid first-round finished followed by a rambunctious celebration led to the hyper Brazilian turning from an emerging hardcore darling to a hyped contender on the come-up, complete with loads of media attention.

“I talked to my management and I wanted this fight with Volkan in the United States,” explained Rakic, who crossed the Atlantic to compete in Toronto at UFC 231, where he stopped Devin Clark in the opening round. “We wanted to fight at UFC 245, but the card was full.

“When I got offered this fight in Korea, I took it because the name is more important than the location, but in the future, I’m looking forward to fighting in the U.S. so I can get on the radar and get more attention.”

As much as he wants to compete in the United States, a fight like this is something Rakic has been seeking for quite some time. 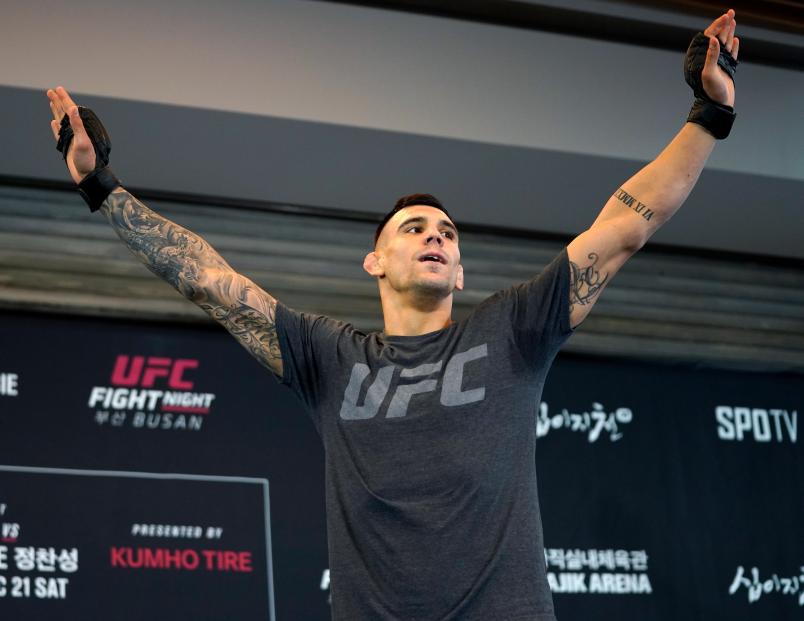 He lobbied for the chance to face a Top 10 opponent following his frenetic one-round encounter with Clark last December and ended up paired off with Manuwa, a former Top 5 talent.

After putting the “Poster Boy” out in spectacular fashion, Rakic again lobbied for the chance to share the cage with a top-ranked foe and this time, his wish was granted with a date opposite Oezdemir.

“This is a perfect matchup,” he said of the bout against the Swiss standout. “He’s a strong guy, he’s fought for the title and it’s a chance for me to prove to everyone that I belong in the Top 5.

“There is only one way to get there. Volkan is in front of me now and I have to take him out to get to where I want.”

Oezdemir is the ultimate litmus test in the upper echelon of the light heavyweight division — a guy who began his UFC run with three wins in six months to earn a title shot and who has faced Top 10 opponents each of the seven times he’s made the walk to the Octagon. 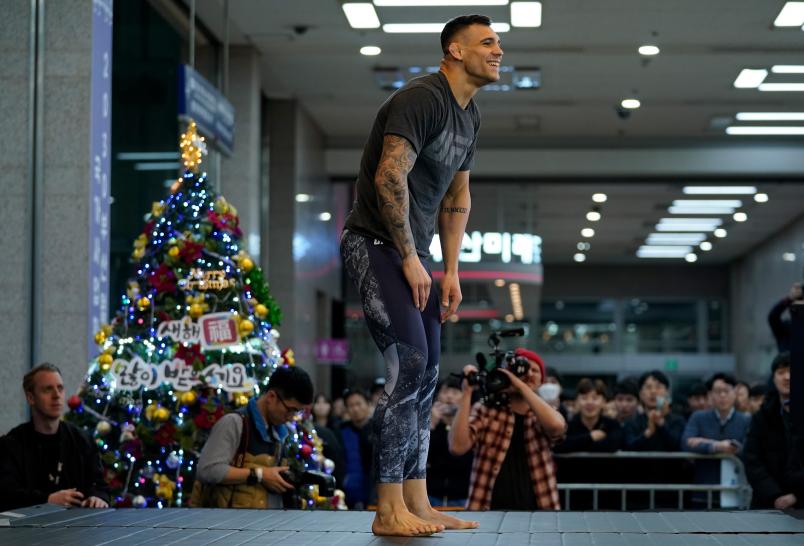 Though some questioned his talents when he suffered a third straight loss in March, it wasn’t your average three-fight slide, as the first loss came in a championship bout opposite Daniel Cormier at UFC 220, the second came against Anthony Smith, who then went on to challenge for the title and the third was a debated split decision defeat against rising star Dominick Reyes, who is set to fight for championship gold in February.

In August, Oezdemir broke out of his skid with a second-round stoppage win over Ilir Latifi in Montevideo, Uruguay, cementing his status as a Top 10 fixture and making him the ideal dance partner for Rakic this weekend in Busan.

“I’m in the best shape of my life,” said Rakic, who stayed home in Vienna for this camp rather than venturing to American Top Team as he has done in the past, in order to be with his wife and newborn son, Andrej.

“We planned everything, every detail,” he said of the hometown fight camp. “We flew guys in from different organizations for sparring and the most important thing about this camp was that the focus was only on me.

“When I do training camps at ATT, it’s a big gym, so there are many fighters and the coaches can only focus on a fighter for maybe one hour. This time, I had 100 percent focus on me so we could make adjustments and corrections right away. 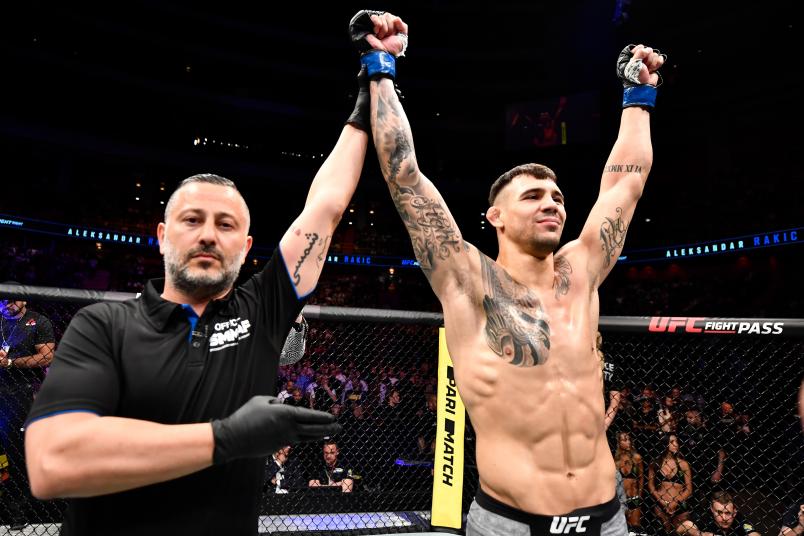 Aleksandar Rakic of Austria celebrates his KO victory over Jimi Manuwa of England in their light heavyweight bout during the UFC Fight Night event at Ericsson Globe on June 1, 2019 in Stockholm, Sweden. (Photo by Jeff Bottari/Zuffa LLC via Getty Images)

“We put in more quality time this camp, so I’ve gotten better in every aspect,” added Rakic, who has looked more impressive each time he’s stepped into the Octagon.

The 27-year-old upstart is meticulous about his preparations and doesn’t just fixate on the here and the now. Just as he and his coaches planned out every aspect of this hometown training camp well in advance and studied Oezdemir rigorously, they’ve also started working on the blueprint for a big 2020 already as well.

“I want to do my homework like I do in all camps; I want to do everything perfectly.” he continued. “The plan is to get a main event — in the U.S. would be great — against someone ranked ahead of me and to just keep working my way up.”

First he has to deal with Oezdemir, but while he knows he’s in tough, Rakic is confident that the work he’s put in and the improvements he continues to make between every fight will pay dividends this weekend.

“I grow after every fight, after every fight camp,” he said. “I’m getting older and smarter, which is important in order for me to show that I’m deserving of being a top contender and capable of fighting the champion in the future.

“I’ve never been so sharp, so strong, so mentally sharp and ready to go,” he added. “I cannot wait. It’s going to be fireworks here in Korea.”