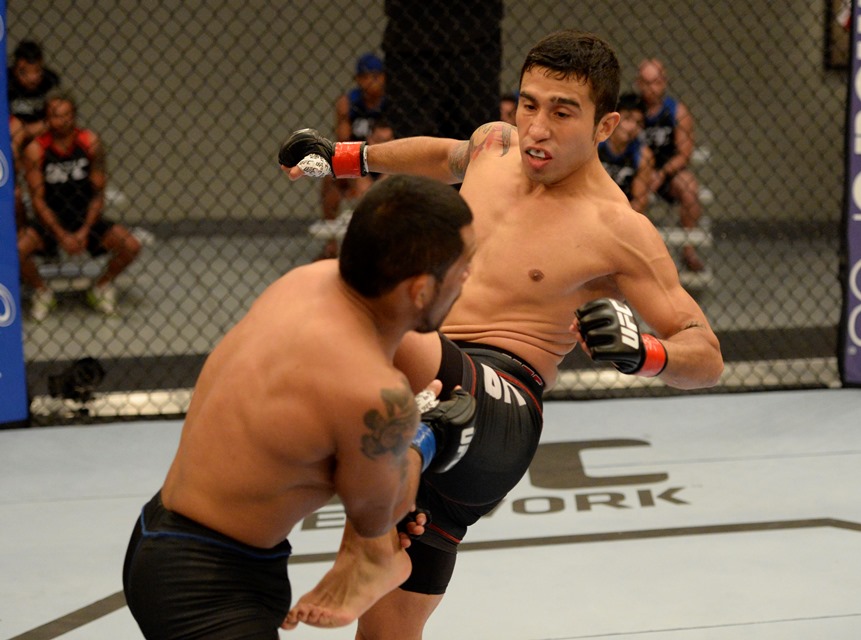 At 25 years old, Alejandro Perez has lived more life than most his age. He’s trained in martial arts since he was 13, he made it to The Ultimate Fighter Latin America after 19 pro fights, and he’s on the verge of becoming an MMA pioneer in his native Mexico should he defeat Jose Quinonez Saturday night in the TUF LATAM bantamweight finals on Saturday in Mexico City.

But the most important development thus far has to be the birth of his daughter earlier this year, a life-altering moment for any young man.

“I've matured as a fighter and as a person, and because of her I have a great motivation and I’d like to be a role model for my daughter, and let her see that she can get what she wants if she works hard for it,” Perez said through a translator.

Hard work has been the path for Perez and his castmates on TUF LATAM, many of whom will enter the Octagon for the first time on Saturday. And that was even before spending six weeks stuck in a house with nothing to do but train. Estado de Mexico’s Perez said he would do it all again though.

“I would return gladly to another show,” he said. “It's a great project that makes people see what someone really is as a person, and not just as a fighter. That helps to motivate many young people, and I personally learned a lot, not only about MMA, but about life.”

When you talk to the TUF LATAM cast members, there’s a sense – both spoken and implied – that their time in the reality television bubble wasn’t just a way for them to advance their careers, but to also expose the sport to those who may have not known of it back home and to set an example for the next generation of fighters. That’s a big task to take on, but they all did it, and now Saturday night’s event is an even bigger platform to perform on, especially for those who hail from Mexico.

“It is a very big step,” Perez said of making his UFC debut in Mexico City. “We have provided a lot for MMA in Mexico - fighters, trainers and promoters – and I am so glad because my dream was to fight in the UFC and now that I have the opportunity to fight with my family, my friends, and my fans in the Arena.”

A pro since 2005, Perez was one of the most experienced members of Team Velasquez on TUF LATAM, and his wins over Colombian Olympic wrestler Fredy Serrano and Argentina’s Guido Cannetti proved that he was a step ahead of the pack. But when he steps into the Octagon for his bout on Saturday, he will be facing not just a teammate from the show in Quinonez, but the man who handed him his most recent loss, as “Teco” outpointed him in August of 2013. So “Diablito” knows that this is no ordinary fight.

“It's a good test for me, because I know him not just as a fighter, but as a person,” Perez said. “I really don’t care about my rivals though; I train and fight to be the best, and to be the best I have to fight the best. So I’m happy to fight him in the final and I know I will be the Ultimate Fighter.”

Training at American Kickboxing Academy (AKA), the gym home to the likes of Cain Velasquez, Daniel Cormier, and Luke Rockhold, Perez certainly gets a good look at the best day in and day out, and as his big night approaches, he’s prepared to use the lessons he’s learned in the San Jose gym.

“There are three key words,” he said of those lessons. “Effort, dedication and focus. I have seen the champions that took that path, and they have a different mindset to those who are not champions.”

Alejandro Perez wants to be a champion.