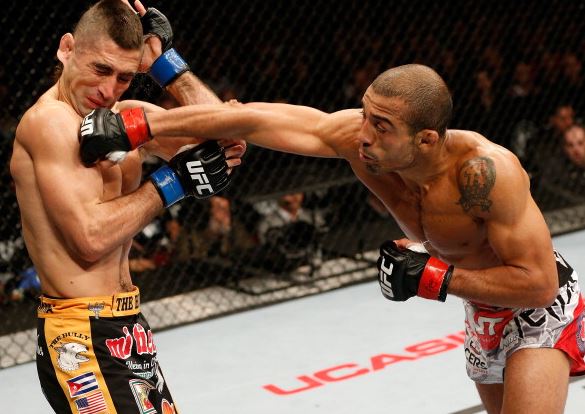 NEWARK, February 1 - UFC featherweight champion Jose Aldo didn’t get the finish in his sixth successful title defense against Ricardo Lamas Saturday night at Prudential Center. But in winning a dominant unanimous decision over Lamas in the UFC 169 co-main event, he once again made it clear that at 145 pounds, there is no one better.

Lamas showed no nerves in his first world title fight, working Aldo’s legs with his kicks over the first three minutes. Aldo took the shots and feinted, looking to get Lamas to overcommit. When he did, with two minutes remaining, Aldo attacked with a punch / kick combo and moments later threw a spinning back kick to the body. As the clock ticked down, Lamas slipped to the mat and again Aldo pounced, intent on making the challenger pay for every mistake.

Sticking to his kicking attack, Lamas mixed things up nicely to the head and body as the second round commenced. Aldo wanted to show Lamas who was boss though, and when he threw his own shots, he put plenty of heat on them. Lamas continued to throw and land over the course of the round, but Aldo walked through every punch and kick, with every punch and kick the Brazilian threw holding significantly more weight, and it showed as Lamas staggered after leg kicks and started to show the wear of the fight on his face courtesy of a welt under his left eye.

Aldo’s leg kicks began to punish Lamas even more in the third, perhaps prompting Lamas’ first takedown attempt of the fight, which was unsuccessful. But “The Bully” stayed aggressive with a busy attack. It was just that when Aldo attacked, his shots were doing more damage.

Early in the fourth round, Lamas shot for another takedown, and when he couldn’t get it, he locked Aldo up against the fence. Aldo reversed position, and eventually the two went to the mat, the champion in the top position. With 90 seconds remaining, Aldo got the mount position and then took Lamas’ back as he looked to secure a rear naked choke. Lamas was able to escape and get back to his feet, but a late takedown attempt came up empty.

Lamas finally had his chance midway through the final round, as he got the top position on the mat and began firing off strikes. Aldo, cool as ever, took some shots, but it was too little too late for Lamas, who drops to 13-3 with the loss.

It took more than two years, but Alistair Overeem finally got his second UFC win, breaking a two fight losing streak with a one-sided three round shutout over Frank Mir.

All three judges saw it 30-27 for Overeem. The loss was Mir’s fourth straight, putting his fighting future in question.

Overeem (37-13, 1 NC) was in control from the opening bell, calmly picking at Mir (16-9) until he found the right moment to strike. That moment came just before the midway point, as a right knee to the head hurt and dropped the former UFC heavyweight champion. It looked like the end would be seconds away, but after getting his nose bloodied, Mir got back to his feet. Again Overeem stalked, but this time Mir was able to drag “The Reem” to the mat, opting to work from his back. Overeem was fine with that scenario, as he ripped off ground strikes until the bell.

In the second minute of round two, Mir was able to get Overeem to the canvas again, this time staying in the top position. But a failed guillotine choke attempt resulted in Overeem reversing position and getting on top, where more ground strikes rained down, bloodying the Las Vegan’s face.

The fight quickly went back to the mat to start round three, but Overeem didn’t stay there long. Mir immediately shot for another takedown and while he didn’t get it, the fighters strayed to the ground, staying there a lot longer than the first time, but with the same result: Overeem on top and dishing out punishment. With a little over a minute left, Overeem stood and unleashed a quick right hand that snapped Mir’s head back. It would be the final exclamation mark on Overeem’s victory, as he rode out the clock and collected the win.

Flyweight contenders Ali Bagautinov and John Lineker battled it out for three rounds, with Bagautinov taking the three round unanimous decision win.

Lineker swung for the cheap seats with his first punch of the fight, but missed and got taken down for his trouble. After Bagautinov controlled the action for a spell, the two traded leg lock attempts before standing with two minutes left. And despite Lineker’s taunting of the Dagestan native to stand and trade, Bagautinov finished the round with another takedown.

Bagautinov got a new found respect for Lineker’s power in the second round as he got tagged with several hard shots, leading him to shoot for takedowns often. When not looking to put Lineker on the mat, Bagautinov’s faster hands served him well, but his punches didn’t deter his foe’s forward motion in the slightest.

The third was all Bagautinov though, as he dominated Lineker on the mat, never allowing the Brazilian banger to get the opportunity to unleash his “Hands of Stone.” 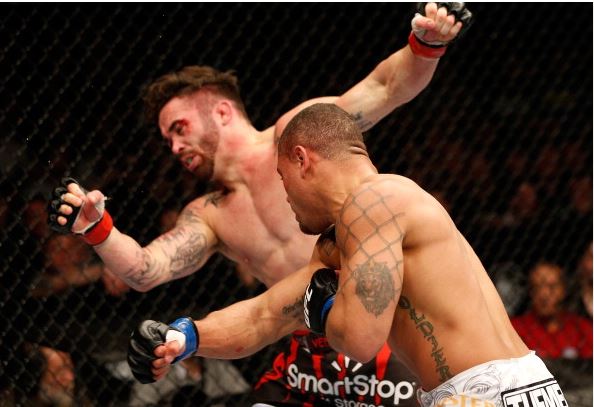 After a less than thrilling preliminary card, lightweights Abel Trujillo and Jamie Varner made up for everything in seven minutes and 32 seconds of the main card opener, going to toe-to-toe for a round and a half before Trujillo ended matters with a stunning second round knockout.

There were several solid standup exchanges in the opening two minutes, with Trujillo getting the better of his foe, but not by much. A takedown attempt by Trujillo was a costly one, as Varner took the dominant top position on the way down, and he quickly attempted a north-south choke on his foe. Trujillo was able to keep his composure under duress, and Varner eventually let go of the choke and the two rose. In response, Trujillo went on the attack and the two started swinging, igniting the crowd, who were thrilled by the sustained action.

The slugfest continued in round two, with each fighter taking turns rocking the other. In the second minute, Varner’s shots sent Trujillo looking for a takedown, and Varner just kept throwing. Remarkably, Trujillo got up, but he continued to take hard shots to the head. But just when it looked like Varner was on the verge of a stoppage win, a flush right hand sent the former WEC champion down to the deck face first, prompting referee Dan Miragliotta to step in and halt the bout at 2:32 of the round.