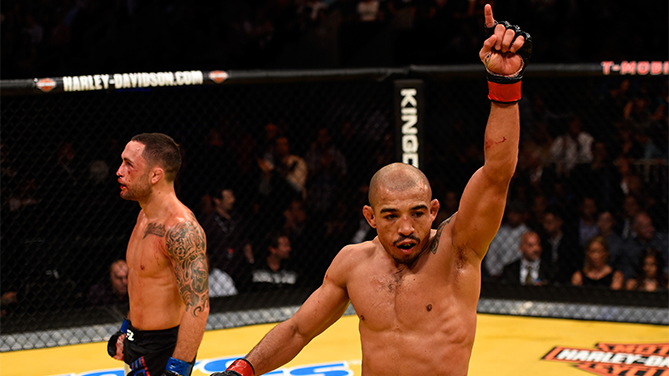 Despite losing his UFC featherweight title in 13 seconds to Conor McGregor last December, Jose Aldo proved Saturday night at T-Mobile that he’s still the fighter who went unbeaten for 10 years before that bout, winning a five-round unanimous decision over former lightweight champion Frankie Edgar to secure the interim 145-pound crown.

Unlike their first bout, this time it was Edgar attacking Aldo’s legs, instead of vice versa, but the Rio de Janeiro product stood in the pocket patiently, waiting for his chance to strike. Edgar wasn’t giving him that chance thanks to some slick combinations. Aldo’s first concerted offensive attack came with two minutes left, and Edgar responded with a single leg takedown attempt but Aldo pulled free easily. With under a minute left, Aldo landed a hard right hand, Edgar taking it well as he kept moving forward. Aldo did surge as the round closed, perhaps stealing the frame on the scorecards.

Aldo continued to elude Edgar’s takedown attempts in round two, and the former 145-pound champion countered well in response, opening a cut over Edgar’s right eye. The blood only pushed Edgar harder, as he tried to make things happen with whatever he had at his disposal. Aldo was content to play matador though, as he countered with ease while tossing off takedowns.

Now showing swelling around his left eye, Edgar marched into the line of fire once more in round three, Aldo deftly avoiding takedowns while landing the crisper blows. In the second minute, Edgar got some extended time in the clinch against the fence, picking up some valuable points. And when they broke, a quick combination wobbled Aldo briefly. With less than two minutes left, Aldo got even with a hard right, but Edgar bulled Aldo into the fence, cleared his head and got back to work, trying to test his opponent’s gas tank, which seemed to be doing just fine, as Aldo landed a knee late in the frame.

Told by coach Mark Henry that he needed the last two rounds, Edgar bit down on his mouthpiece for another run in round four, and he began to fake takedowns before going upstairs with strikes, putting some points in the bank. Aldo remained in the pocket, picking his shots as Edgar rushed, and as the round progressed, he began landing right hands frequently, his strikes clearly doing more damage, a point proven when a left hand scored a flash knockdown in the final 20 seconds.

Aldo opened up the final round with one of his patented kicks to the leg, a weapon he didn’t utilize like he did in the first bout, and as his confidence grew, his potshotting grew more potent, as he mixed up his attacks. Not surprisingly, the bloodied and bruised Edgar refused to back down, trying whatever he could to change the tide of the fight, but he wasn’t able to crack Aldo’s chin or defense.