Aldo Still Embracing The Lessons Of A Champion

Jose Aldo has always had a Jekyll and Hyde personality during a career that saw him come from seemingly out of nowhere to become a fighter many believe to be the greatest featherweight in mixed martial arts history.

Usually deadly serious in the lead-up to a fight and during it, Aldo’s stone-faced demeanor could be broken up at times by an ear-to-ear grin that could light up an arena. Catch him outside of fight week, and these grins and laughs are more frequent, but when it’s game time, Aldo rarely cracks.

But as soon as he stopped Jeremy Stephens last July in Calgary, snapping the first two-fight losing streak of his career in the process, all the emotions came flooding out. When asked what it meant for him to get that win, though, he simply says through a translator, “It was a sense of duty fulfilled to be able to return to the path of victories.”

It’s fight week for Jose Aldo again, and the all-business battler from Rio de Janeiro is locked in for a pivotal matchup in Fortaleza against rising star Renato Moicano.

“He is a great fighter,” said Aldo of his foe. “A BJJ black belt and a tough Muay Thai fighter.”

Aldo has always been respectful of his opponents, even when they haven’t returned the favor. This time is no different. There is no bad blood, no trash talking between the two countrymen. This is business. But in the fight business there is usually no room for sentimentality, which means many look at this fight as a possible changing of the guard, an opportunity for Moicano to make his name and stamp his ticket to a shot at UFC featherweight champion Max Holloway.

But is it a possible title eliminator for just one of the combatants? Aldo isn’t exactly amped up when asked if the winner will be in line for a shot at the belt.

“I guess so and I think we deserve it,” he said. 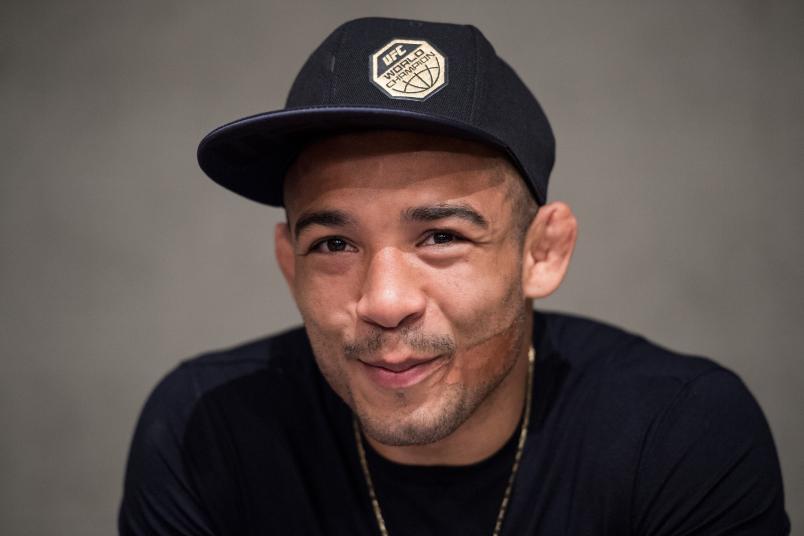 Moicano has gone 5-1 since making his UFC debut in December 2014, and with back-to-back wins over Calvin Kattar and Cub Swanson, a third win – this one over Aldo – should make a strong case.

Will Aldo have the same case if he wins on Saturday, especially since he has already lost twice to Holloway? The Brazilian star has gone on record saying that he’s not chasing a third title, but when asked if the belt was still the goal, he switched course, saying, “Always. If I do not have these thoughts, I'd rather don't fight. I still have a contract with the UFC, so I will give my best. My head and my thoughts are here.”

Aldo is a pro, so that’s no surprise, and he’s also a competitor whose first reign atop the 145-pound weight class in the UFC and WEC lasted over six years. That’s a lifetime in combat sports, and it’s far from an easy feat to accomplish. 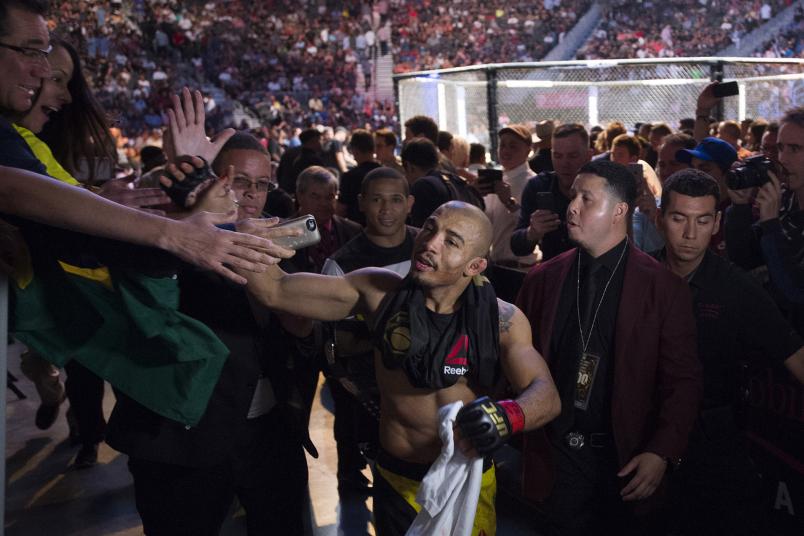 “I think to be a good mixed martial arts fighter you have to have a good game and be able to surprise your opponent,” he said. “Some fights you need to be more aggressive, others more cautious. It depends. But, for sure, you need to have a good bunch of options to surprise because staying at the top is difficult.”

Those lessons learned don’t just disappear, and while Aldo has had his issues with injuries and recent defeats, in his mind he’s still the man who ruled the featherweight division with an iron fist. And when those iron fists ended Stephens’ night last summer, he celebrated; not just for himself, but for the fans who were thrilled to see him deliver a reminder that he is still Jose Aldo.

“I think I made my history and a great career,” he said. “The fans won't forget that. So I know when I fight and wherever I go, I have them with me.”