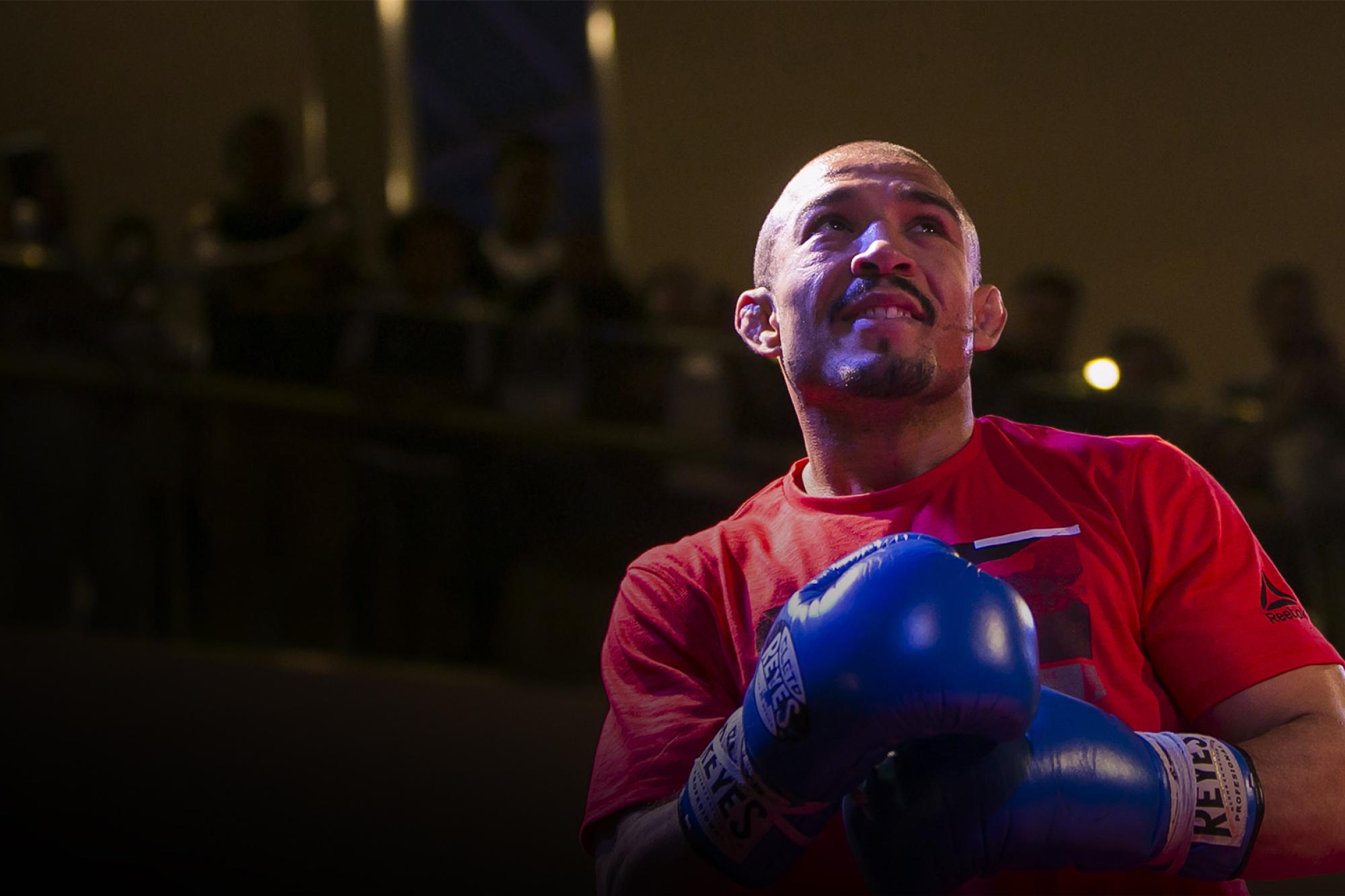 “I decided to change the weight class as a new experience; it is a new challenge for me,” Aldo said of the move to the 135-pound ranks.
By E. Spencer Kyte, on Twitter @SpencerKyte • Dec. 10, 2019

This weekend in Las Vegas, Jose Aldo will make the walk to the Octagon for the 15th time.

As it has since he walked into Arco Arena at WEC 48 to face Urijah Faber in his hometown of Sacramento, “Run This Town” will echo through the venue with Jay-Z, Kanye West and Rihanna informing everyone grooving along that the Brazilian believes beyond a shadow of a doubt that no matter the city, he’s the boss once he’s inside the cage.

While Saturday’s entrance will be familiar, one key element will be significantly different, as after 15 years competing at featherweight, Aldo is venturing down a division to square off with countryman and elite contender Marlon Moraes in his first bout as a bantamweight.

“I decided to change the weight class as a new experience; it is a new challenge for me,” Aldo said of the move to the 135-pound ranks. “At 145, I was a long-time champion and now I'm facing a new challenge. I'm feeling good, I'm very happy and excited about this opportunity.”

It has been more than a decade since Aldo burst onto the scene in the WEC and more than eight years since he made his first triumphant walk to the Octagon. He carried the UFC featherweight title with him into that memorable clash with Mark Hominick in Toronto and repeated that routine for six additional fights after it, lording over the 145-pound weight class from its inception.

But things changed for Aldo four years ago when after nearly a year’s worth of hype and build, he finally stepped into the cage with Conor McGregor at UFC 194. In just 13 seconds, his six-year stand as the best featherweight on the planet came to an abrupt halt and, since then, fans and observers have struggled to figure out where the long-time champion fit in within the division.

A second win over Frankie Edgar was followed by twin defeats at the hands of current champ Max Holloway, leading to the first chorus of questions about Aldo’s future. Consecutive stoppage victories over durable contenders Jeremy Stephens and Renato Moicano silenced the critics momentarily, but a flat showing at UFC 237 in Rio de Janeiro against Alexander Volkanovski cranked the volume back up to 11.

“It is not for me to say that,” said Aldo when asked about the tendency for people to be more critical of legendary talents that hit a rough patch in the cage. “That is the work of the media; it has always been so and always will be, with me and any champion that one day will lose.

“I don't care what the media or other people talk about it,” he added. “I work hard, I train hard, always thinking of my family and those that matter to me. If I get constructive criticism, I always try to hear it, but my focus is always on caring for my family and my team.”

While fans and observers struggled to figure out where the former champion fit in the division he once dominated over the last several years, Aldo didn’t make things any easier, as it seemed like he was never quite sure what was next either.

Throughout his featherweight career, tales of gruelling weight cuts preceded every fight and whispers about a new chapter at lightweight were ever-present. He talked about retiring or boxing or riding out the stretch in the 145-pound weight class he once ruled even though the path back to title contention would never grow shorter as long as Holloway remained on the throne.

Then, during the summer, Aldo floated the idea of venturing down to the 135-pound weight class to challenge Henry Cejudo, the two-division champion who spent the months after defeating Moraes for the vacant bantamweight title instructing everyone to “bend the knee” while calling for fights against various former champions and contenders.

With his history of challenging weight cuts, most quickly dismissed the notion, but soon after, pictures started to circulate of an even leaner, more shredded Aldo actively preparing for his bantamweight debut.

And with Cejudo still on the mend, the UFC tapped the last man to share the Octagon with the reigning champion to welcome Aldo to his new weight class.

“As soon as I received the name, I was excited,” Aldo said of being paired off with Moraes. “He is No. 1 in the rankings and if I want anything else in the UFC, beating him is a great step.”

The matchup — one of two between iconic talents and current contenders set to kick off the UFC 245 pay-per-view main card on Saturday night — provides Aldo with an opportunity to jump to the top of the list of contenders with a victory, though beating Moraes is no easy feat.

After dropping his promotional debut against Raphael Assuncao by split decision, the New Jersey-based Moraes responded by winning four straight, finishing each of the final three inside the opening round, including avenging his loss to Assuncao. Entrenched as one of the top contenders in the division, he was paired off with Cejudo in a bout to crown a new bantamweight champion at UFC 238 in June, but it wasn’t his night.

Following a strong first round, Moraes slowed and Cejudo rallied, ultimately earning the finish late in the third round to secure his second UFC title.

“He is a great fighter and a great person,” Aldo said of Moraes, who previously trained at Nova Uniao. “He’s a nice guy, but a contest is a contest, no matter what.”

Thus far, everything appears to be right on track for Aldo, who has talked at great detail about making meaningful changes to his diet in order to facilitate this move to bantamweight, and unlike prior to previous fights, the 33-year-old legend is locked into a specific plan of attack going forward.

“We all know how good Marlon is,” he added, “but I will face him and do my best to win this fight.”

Many have claimed to “run” Las Vegas in the past.

On Saturday night, Aldo is returning to the desert and departing on a new adventure, but the song will remain the same.