Aldo, McGregor talk World Tour Trash, Or Is it the Truth? 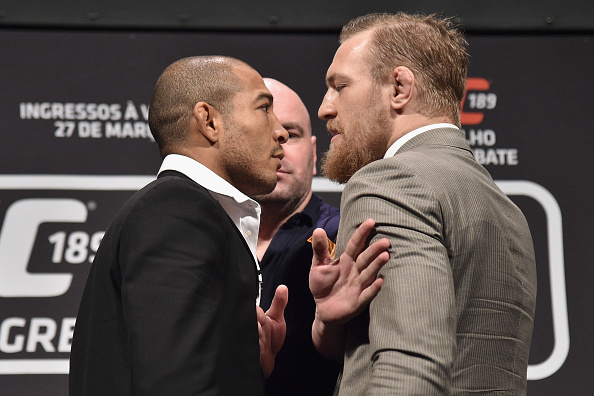 As fans inside the arena raucously extolled the virtues of Aldo in his hometown and held up signs depicting McGregor as the joker, McGregor – with UFC President Dana White on the dais and Aldo seated across the stage --  sat back with his feet on a table atop the dais and soaked in all the jeers.

“The guy has one finish in UFC history!” McGregor, wearing a three-piece pinstripe bespoke suit and designer sunglasses, shouted to the crowd while motioning to Aldo. “One legit finish.  That’s it. I have four. Facts are facts. When I hit, they fall. When he hits, they survive. That’s it.

“He has 25 minutes to hide that battle-worn chin from me. It won’t happen. In 25 minutes, I will hit him and he will fall!”

The boos rained down, and McGregor, ever the brash, confident showman, grew more bold.  Aldo, in a dark suit and no tie, smiled broadly as one fan told the challenger, “McGregor, you are garbage! And Aldo will get you! Aldo will get you!”

The first stop of a 10-city, five country, three continent, 12-day tour promoting the UFC 189 title bout has already set the tone for what promises to be a massive event July 11 at MGM Grand Garden Arena, the culmination of International Fight Week in Las Vegas.

There is bad blood between these two, and plenty of reciprocal disrespect. And that promises to bring more fireworks as the trip moves on to Las Vegas, Los Angeles, Boston, New York City, Toronto, London and, finally, Dublin.

Aldo vs. McGregor will battle for the UFC featherweight belt, while the co-main event features new welterweight champion Robbie Lawler and the No. 2 contender, Rory McDonald.  Lawler and McDonald will also bring the World Tour to Vancouver and Calgary.

“I’m excited about payday, because who doesn’t get excited for payday,” McGregor said backstage. “This has never happened in the history of the company. They’ve never done a world tour like this. Aldo himself is a co-main event champion; he co-main evented with (Renan) Barao fought Urijah Faber.

“But Aldo is such a bad champion, such a coaster, that they stuck him in the co-main event. Stick McGregor in there, and suddenly you’ve got private jets taking us all over the globe to promote the fights.”

Meeting the fans, talking trash, these are two of McGregor’s favorite pastimes.  Or is it really trash?

“I like talking the truth,” McGregor corrected with a smirk, and a wink. “And meeting the fans, of course. It’ll be a lot of fun. I can’t wait.”

The fans in Rio couldn’t wait to unload on McGregor, who raised the ire of the champion Thursday night by visiting a local Irish-themed pub in Rio and using an image of Aldo on a dartboard as a target.

One fan who partied with McGregor at the pub grabbed the mic during the fan Q&A period on  Friday and told the grinning champ, “Aldo, he punched me yesterday at the pub and I’m standing here! Look! Who does he think he is? He’s got nothing!”

Said McGregor, “Hey, I remember you!”

In truth, the fan portion of the Rio news conference became more of a fan challenge to the Irishman.

“Doesn’t anyone have a question?” White asked the crowd.

“Conor – I would like to know how it feels to have death so close up to you!” another fan raged into the microphone as the crowd cheered. “Because when you’re inside the cage, you’re gonna feel all (Aldo’s) rage! Jose Aldo – we’re together!”

“He hasn’t stopped anybody in five years! How’s he gonna stop me?” McGregor responded. “I’ve never even been hit inside the Octagon, let alone hurt!”

Another fan asked Aldo whether he would consider moving up in weight after he defeats McGregor in Las Vegas on July 11.

Once again, Aldo smiled widely and played it very cool.

“Let’s just do this step by step,” the champion replied. “Next step is to win this next title challenge. And once I beat him, then yes, we’ll sit down to talk and see what to do about our career. Thanks brother!”