Aldo: I Have Always Been the UFC Champ

Jose Aldo enjoyed observing the changes atop the UFC featherweight division over the weekend — Conor McGregor relinquished his belt and Aldo was crowned the new linear champion in the weight class.

In an interview with UFC.com Brazil, Aldo said none of the changes came as a surprise. He expected it all, and furthermore, Aldo believes he never really lost his throne.

“I knew this would happen,” Aldo said. “To me, I have always been the champion. I lost that fight because of a (fluke).

“I know I could win in a rematch. I knew I would be champion again. It’s not my fault that (McGregor) is a coward, that he was never champion. I don’t see myself losing to anyone in this weight class, or any other.” 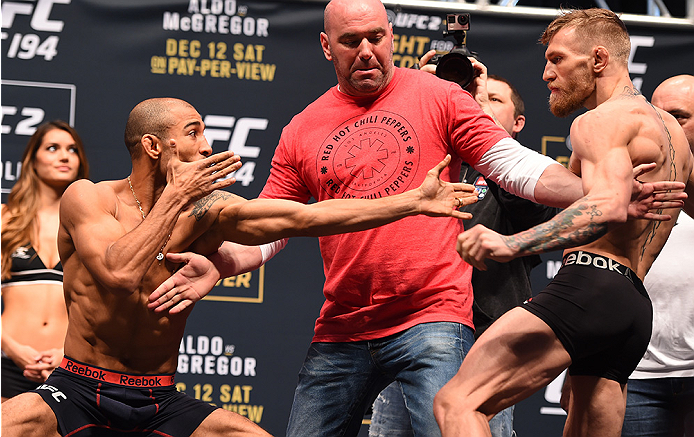 Undefeated for 10 years and the only UFC featherweight champion before McGregor, Aldo was knocked out by the Irishman in December 2015 at UFC 194. Despite Aldo requesting an immediate rematch, the second fight never happened. Aldo then beat Frankie Edgar at UFC 200 to secure the interim title.

But Aldo never stopped thinking about McGregor, and the champ has everything planned for his anticipated second meeting with the brash Irish star.

“Of course I think about this fight,” Aldo said, “and it certainly will happen. I want to defend my belt first, and then I’ll plan on this (McGregor) fight.”

Before then, Aldo must face the winner of the interim title fight between Anthony Pettis and Max Holloway, which headlines UFC 206 on Dec. 10 in Toronto. Pettis, the former lightweight champion, was once scheduled to fight Aldo in 2013, but that matchup was canceled after “Showtime” sustained an injury.

“I don’t care — I’ll be prepared to face whoever wins,” Aldo said of the Pettis-Holloway battle. “Of course, Pettis has a bigger name; he was champion once, and it would be a bigger fight. But if Holloway wins. it’s fine.