Aldo and McGregor Fight for the Cover 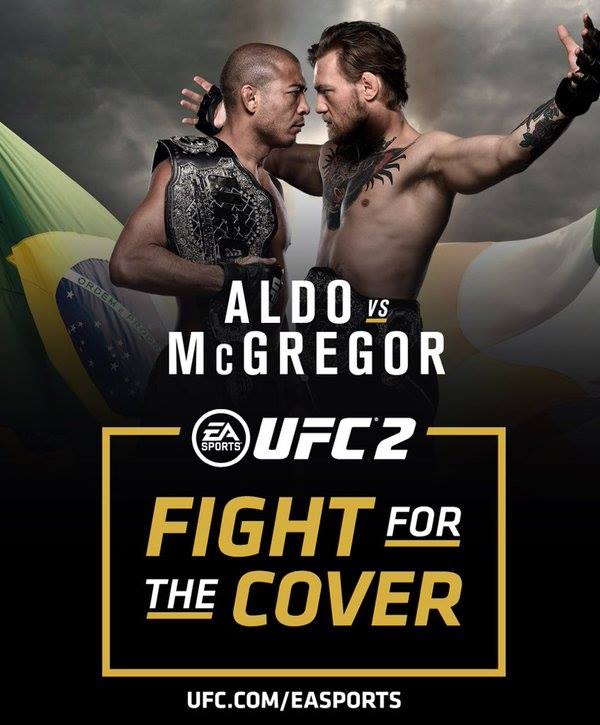 REDWOOD CITY, Calif. – December 3, 2015 – Electronic Arts Inc. (NASDAQ: EA) today announced UFC® featherweight champion Jose Aldo and UFC interim featherweight champion Conor McGregor, will Fight for the Cover to join EA SPORTS™ UFC® 2 cover athlete, “Rowdy” Ronda Rousey. For the first time in EA SPORTS history, the winner of a real-world sporting event will get the opportunity to be included on a game’s cover. The cover will be revealed immediately after the undisputed world featherweight championship at UFC® 194: ALDO vs. McGREGOR on Saturday, December 12 at the MGM Grand® Garden Arena in Las Vegas, Nevada.*

“The main event at UFC 194 between Jose Aldo and Conor McGregor is without a doubt one of the most anticipated events in UFC history,” UFC President Dana White said. “Aldo and McGregor are two of the biggest stars in the world and it’s fitting that next Saturday night the winner not only becomes the undisputed UFC featherweight champion, but also the second global cover athlete of EA SPORTS UFC 2.”

Fight fans can participate in the biggest fight of the year by predicting the winner through UFC.com/EASPORTS. Fans can pick the round, as well as determine if Aldo or McGregor will win by submission, knockout, or decision, and witness their prediction come to life through a unique gameplay video shareable on social channels.

“Fight for the Cover is another way we are bringing an authentic and exciting experience to the fans,” said Jamie McKinlay, Vice President of Marketing, EA SPORTS. “From the Octagon at UFC 194 on December 12, to the Octagon in EA SPORTS UFC 2, this is a huge moment in UFC and EA SPORTS history, and we’re thrilled to be a part of it.”

EA SPORTS UFC 2 delivers an experience for every fight fan including all-new gameplay features like the Knockout Physics System, as well as stunning character likeness and animation that takes the franchise to the next level. From the biggest roster of real-world fighters, to authentic gameplay features, EA SPORTS UFC 2 will let fans experience the thrill of finishing the fight on Xbox One, the all-in-one games and entertainment system from Microsoft and the PlayStation®4 computer entertainment system.

Full feature and mode details can be found at http://easports.com/ufc/features.

*In the event of a draw, substitution, or in its sole discretion, EA reserves the right to select the athletes ultimately used for EA SPORTS UFC 2’s cover.