Aldo and Holloway both hunger to be undisputed king

On Saturday, June 3 in Rio de Janeiro, Brazil, two men will walk to the Octagon inside Jeunesse Arena, each one carrying a championship belt, but entering the cage at very different stages in their respective careers.

In the blue corner, Max Holloway, who became just the sixth fighter in UFC history to amass 10 consecutive victories when he stopped Anthony Pettis to claim the interim featherweight title at UFC 206 last winter in Toronto.

In the red corner, Jose Aldo – a legend in the sport and icon in Brazil who returned to the top of the division with a dominant decision victory over Frankie Edgar at UFC 200, silencing those who question whether the long-reigning champion would be able to bounce back from his sudden and emphatic loss to Conor McGregor seven months earlier.

Though they enter their clash at UFC 212 on even ground, both men hungry to emerge as the undisputed UFC featherweight champion, Thursday’s media conference call featuring the two titleholders highlighted the differences between the tenured standout who will be fighting on his home turf and the surging Hawaiian who is eager to prove he’s the best to ever grace the division.

The combatants appeared on the call separately and their respective 30-minute sessions couldn’t have been more different.

As smooth with his answers as he is with his footwork inside the cage, Aldo parried questions about his motivation and the challenges Holloway presents with ease, framing the upcoming title unification as another day at the office and one more chance to defend his title and further his legacy.

After stating that he has some goals in mind, the 30-year-old Aldo was somewhat guarded and cryptic when pressed for more detail, making sure keep it clear that Holloway is his chief focus and everything else is contingent on emerging from their impending clash as the undisputed UFC featherweight champion.

“I think it’s going to be a great fight,” he said of his bout with Holloway. “I think that he has great fights in the past and he’s built himself up to title challenger, but it really doesn’t matter to me. I have some own goals of mine, different things I’ve been thinking of and just going in there and defending my belt once again.

“I think right now I have to get through this title fight right now and once I get through that, I can start thinking of some of the other things I want to do,” he said when asked to elaborate on his current goals. “I think there are other challenges - maybe other divisions or other guys I haven’t fought before – so I think there is plenty left for me to challenge myself.”

Where the Nova Uniao product was reserved and reflective, Holloway was amped up, using Thursday’s call to let everyone listening to the call or reading the transcripts that he’s ready to usher in a new era in the featherweight division on June 3rd in Rio. 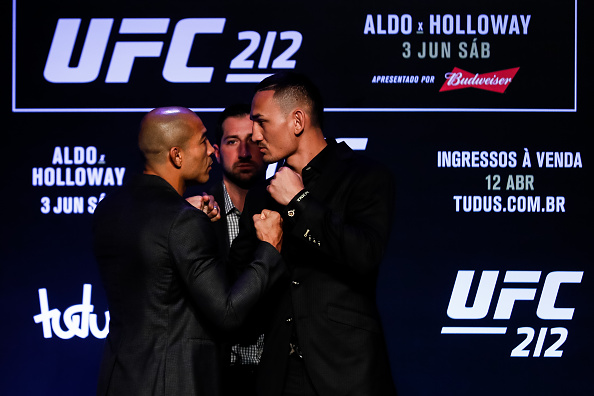 As he’s continued to stack victories, Holloway has continued to speak out more and more about his place in the division, culminating in his “Where’s Aldo?” callout following his victory over Pettis in December.

The technical and punishing Hawaiian, who debuted in the Octagon against Dustin Poirier as a 20-year-old, has systematically worked his way up the divisional ladder, putting together the longest active win streak in the division while taking out established talents like Cub Swanson, Jeremy Stephens and Ricardo Lamas en route to claiming the interim title.

Yet despite his unmatched run of success, Hollaway feels he hasn’t gotten the attention and recognition that he deserves and he fully intends on using his bout with Aldo to change all that going forward.

“I’m young, I’m 25 too and just because I don’t have a comb-over or some nice shoes, a nice pair of shades, they’re not pushing me,” snapped the interim titleholder. “It’s some (BS), but it is what it is though. Everything comes in due time and my time is coming. You guys are gonna see.

“I respect the guy – he’s the greatest to do it,” he said of Aldo, adding that he used to watch Aldo dominate the division just like everyone else prior to beginning his career. “But it’s time for a new era.”

Where Aldo was guarded about what he’s looking for in the future, Holloway made sure his ambitions were crystal clear.

“I don’t read palms. I don’t read the stars. I’m not a fortuneteller,” he began. “I can’t see the future, but at the end of the day, I know what I want. I want the undisputed stuff – the undisputed career – and the things I can control is training and the way I prepare for fights. You look at these last couple fights and they’re dominant wins and I don’t plan on changing anything on June 3rd.