Aldo and Edgar to Battle for Interim Title at UFC 200 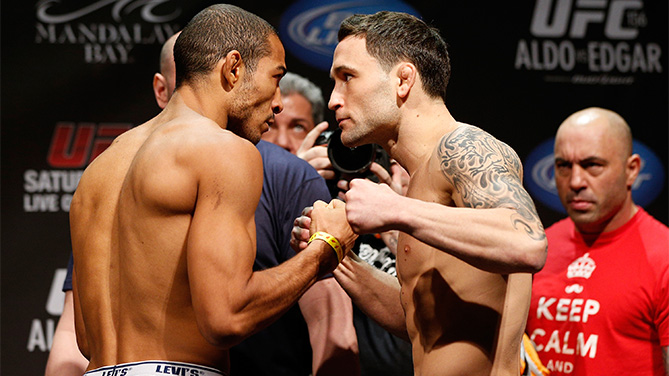 Having already met in 2013, with Aldo defeating Edgar by way of a close five-round decision, the two will clash again this July, and with a win, one of them will face Dublin’s McGregor for the undisputed title.

Also made official for the historic UFC 200 card were five more stellar matchups:

•    Cain Velasquez will return to the Octagon to face Travis Browne in a bout the former two-time heavyweight champion hopes will propel him back into a title fight against the winner of UFC 198’s Fabricio Werdum vs. Stipe Miocic bout.

•    Welterweight contenders Johny Hendricks and Kelvin Gastelum will square off in a bout that sees the two 170-pound standouts jockeying for position in one of the sport’s most talent rich divisions.

•    Fresh from his February win over Thales Leites, Gegard Mousasi continues his road to the top of the 185-pound weight class when he takes on one of the hottest fighters in the division in the form of Derek Brunson, who has won four straight in the Octagon, three by knockout.

•    At 155 pounds, it’s a fight fan’s dream fight when lightweight action heroes Joe Lauzon and Diego Sanchez finally meet in the Octagon. Originally scheduled to meet at UFC 180 in 2014, New England and New Mexico’s finest will throw down on the biggest card of the year.

•    Also taking place in the lightweight division will be another bout sure to be action-packed, as former PRIDE champion Takanori Gomi meets New Jersey veteran Jim Miller.