Aldo and Barao: Brothers in Harm

"We wanted to improve our lives somehow and help our family and our
parents, and that’s not only my dream, but the dream of Renan and
everybody else that’s in the game." - Jose Aldo 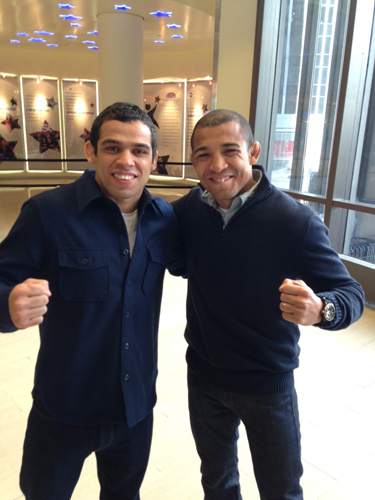 NEW YORK – The smiles comes fast, the jokes in Portuguese even faster, punctuated by gestures and laughs. If you didn’t know any better, you would assume that Jose Aldo and Renan Barao were two brothers on vacation in Manhattan, taking in the sights and just enjoying life.

Well, the enjoying life part is accurate, a far cry from their days in the favelas of their native Brazil. But as far as vacation goes, that’s a concept not in their vocabulary these days. For the two friends, teammates, and training partners, their trip to New York last week was all business, promoting the UFC 169 event this February that will see them in championship fights that they hope will continue to cement their names on the pound for pound list.

Next up will be a rigorous training camp at the Nova Uniao gym in Rio de Janeiro, the place where they met what seems to be a lifetime ago. Back then, they were just prospects trying to build their name in a sport that they hoped would be their ticket out of tough times in Brazil.

“The first time I saw Renan was at the gym,” said Manaus’ Aldo, the UFC featherweight champion, following last Thursday's press conference at Madison Square Garden. “I was living there and Renan came in from Natal. I thought ‘he’s a very talented guy.’ And when he came in I really saw the potential, and I saw that he could become a great fighter, and today, after all that he’s been through, he’s truly come out as a great fighter with the potential to keep going and become a great world champion.”

The current interim UFC bantamweight champion, Natal’s Barao already knew who Aldo was when he visited Rio to train, both for his success in MMA, and in the world of Brazilian Jiu-Jitsu.

“I had seen some of his fights before, and some of my friends who were in jiu-jitsu championships had met him before and said that he was a great guy and down to Earth, so that was something I was already expecting,” recalled Barao. “I was very young at the time, so I only spent a few days there, but I had an opportunity to come back later on and spend some more time with him. Aldo’s always been a good brother and a great guy all around. He’s very talented and he deserves to be where he is right now.”

At this point, Aldo interrupts to make a point, saying “we both deserve to be where we are right now,” and Barao nods appreciatively. Only five months separate the 27-year-old Aldo and the 26-year-old Barao, but if they were biological brothers, it’s the featherweight champ who appears to be the older one in demeanor, slightly more serious than the ever-smiling Barao. It’s a dynamic that clearly works, and has worked for some time now, with Aldo (23-1) unbeaten since 2006 and Barao (33-1, 1 NC) since 2005. But back in the early days, before they headlined arenas and went on press tours, the dream was a simple one: to get enough money to make life better for their families.

“When you leave your family and friends and everybody behind and you start to look to do something to build your dream, it’s really a shot in the dark,” said Aldo. “So we always thought about that. We wanted to improve our lives somehow and help our family and our parents, and that’s not only my dream, but the dream of Renan and everybody else that’s in the game.”

By 2008, the dreams started to become reality. Aldo made his WEC debut that year, and in 2009 he defeated Mike Brown for the organization’s crown. Seven months later, Barao joined his teammate in the WEC, and when 2011 rolled around, both were making their UFC debuts. From there, it’s been a whirlwind, Aldo posting a 5-0 UFC mark and Barao winning all six of his Octagon bouts. It may sound like it’s been easy, but that’s certainly not the case, especially when they watch each other fight, though Barao says, “It’s something really cool. It’s not just with Jose Aldo, but with other friends and athletes that are from our team, because we’re not just there as a team, we’re a family. And the fact that he’s up there, man, something comes in and the heart starts pounding, the adrenalin kicks in, and sometimes I think it’s more emotional to see him in there than for me to be in there.”

He laughs, and Aldo joins him, agreeing on that point wholeheartedly.

“Just like Renan said, when you see your friend fighting, it’s out of your control, so it really makes you anxious to see that,” he said. “So it’s tough to control the whole adrenalin thing. You’re doing the moves with them (Laughs), but at the end of the day, it’s good to see what the results have been, and I’m really proud to see my friends up there.”

On February 1st in Newark, New Jersey’s Prudential Center, two brothers in harm will see their names in lights as they perform for the entire world, Barao against Dominick Cruz, and Aldo against Ricardo Lamas. They’ve come a long way since those early days, days they won’t forget, but ones they don’t particularly care to remember either.

“It’s tough to think of anything that you miss from a time that wasn’t all that comfortable and all that easy to begin with,” said Aldo. “Today we can talk about the same subjects, but we’re definitely in a better and more comfortable position.”

“We think about the old times and we actually talk about the same things,” said Barao. “We make the same jokes that we used to make, but we’re in a more comfortable place right now. What’s behind you is behind you and we don’t want to keep bringing it up, especially because they were difficult times and something you don’t want to be thinking about all the time. But today, it’s all happiness, all good.”

With that, Aldo and Barao look at each other, nod, and smile. They made it.